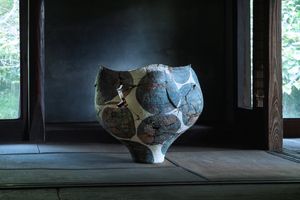 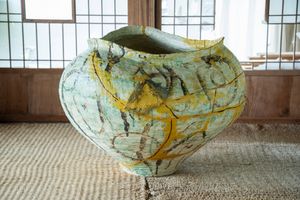 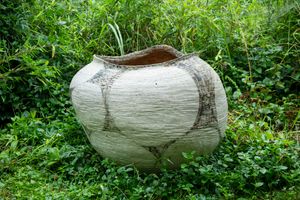 September 3, 2021, Los Angeles, CA—Blum & Poe is pleased to present an exhibition of ceramic sculptures by Chiba, Japan-based artist Kazunori Hamana alongside works made in collaboration with fellow artist Yukiko Kuroda. This exhibition follows the announcement of Hamana's representation this summer.

The surfaces of Hamana's sculptures are variously rough, finger-textured, cracked, and fissured. His large and delicate vessels are made from natural clay sourced from Shiga Prefecture in Japan, each finished with Hamana's own mineral glazes. Inspired by traditional Japanese tsubo, functional clay jars dating back to prehistoric times, he creates each sculpture by hand, making use of improvisation and experimentation and cultivating new, inventive techniques in shaping, glazing, colouring, and firing.

After the vessels are fired, he places them outside of his studio for the natural elements to mark and transform, determining their final form. Irregular and imperfect in shape, and sometimes imbued with geometric shapes and abstract symbols, his pots resemble ancient terra-cotta objects that were hidden in the soil for ages.

Hamana collaborates with Yukiko Kuroda on vessels that undergo the process of kintsugi (the art of repairing broken pottery). Both based in a rural village in Japan's Chiba Prefecture, Hamana and Kuroda pursue the principles of kintsugi—refusing waste and celebrating the act of recycling—in both their art practices and in the daily routines of their personal lives and philosophies. Their collaboration began with one of Hamana's vessel that was damaged byaccident—alongside traditional Japanese mending methods, Kuroda used large metal staples to hold the fractures together following the ancient Chinese technique of riveting—the idiosyncratic beauty that resulted spawned a new series of works made in partnership.

Kuroda's interventions follow the traditional practice of treating the ceramic surfaces with the combination of colored urushi (Japanese lacquer) and gold, silver, and pewter, but also include adjoining flaking or cast-off layers of ceramics from other vessels which are created organically during the pottery process. Additionally, she integrates unconventional found materials, often sourced from her neighbourhood. Kuroda's home was previously a local farmer's and still hosts a variety of abandoned farming materials, many of which find their way into her kintsugi practice, such as traces of bamboo baskets or antique paper. She also marks Hamana's pots with remnants of rice grain harvested from his organic rice fields, leaving strong lines and adding new visual landscapes. Each pot is treated as an individual entity with specific needs. Accepting that repair might not be the solution in some cases, Hamana and Kuroda's collaborations embrace each unique narrative, and the natural flow of the life cycle which is transient and impermanent.

Kazunori Hamana (b. 1969, Osaka, Japan) lives and works in Chiba, Japan. His work has been exhibited in public art institutions including the Headlands Center for the Arts, Sausalito, CA

Yukiko Kuroda (b. 1968, Shizuoka, Japan) lives and works in Chiba, Japan. She is an artist who embraces cracks, chips, and fissures in ceramic works, salvaging and generating new forms from pieces that are otherwise considered broken. She began collaborating with Kazunori Hamana in 2017. Her works have been included in group shows including most recently at Amelie, Maison d'art, Paris, France in 2021.