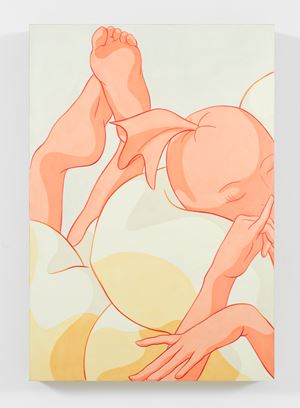 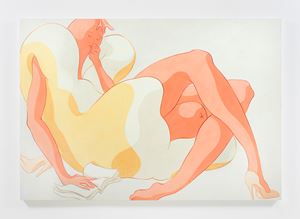 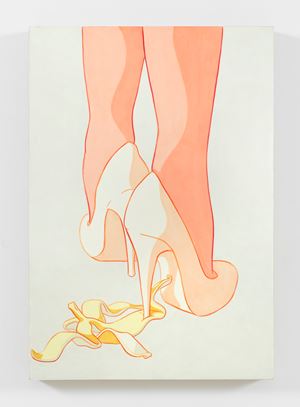 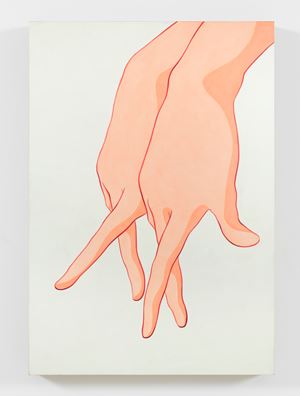 -Anaïs Nin, Seduction of the Minotaur

Capsule Shanghai is delighted to announce the opening of New York-based artist Ivy Haldeman's solo exhibition, (Hesitate), the first presentation of the artist's oeuvre in Shanghai, China. It will feature her most recent paintings and an LED neon-light installation.

Comprised of three idiosyncratic visual tropes: a hotdog figure, hollow business suits in pairs, and gesticulating fingers, Ivy Haldeman's immaculate imageries allow sensuality, vulnerability, and imagination to contend with a variety of culturally pervasive notions. This exhibition complicates the dichotomies of what qualifies as the natural versus the artificial, the free versus the subjugated. As suggested in its title, a momentary pause from repose to performance, a disjunction between mind and body, maybe the elusive position from which a viewer reframes their perception of being human.

Haldeman's hotdog figure, simultaneously an anthropomorphic, phallic, and feminine icon, has undermined what a hotdog embodies: the unnatural, the constructed, and the consumable. Likewise, the business suits, devoid of human figures, would presumably align with conventional perceptions of power, success, anonymity, and predictability, yet they are off balanced by their accentuated silhouette—padded shoulders, swinging hips, expressive cuffs—and generate a visual tension between the masculine and the feminine, as well as between a public persona and a private one. The gesticulating fingers, an isolated body part fully embodied, move en pointe, hint at fetish, and communicate through an implied body language. Be it the hotdog figure's banana phone, her pointy stilettos, her pillowy bun, or her supple book; the business suits acting in concert; or the flirtatious silhouette of the fingers centred on canvas, Haldeman deploys these conduits of make-believe, comical tropes, and even wry humour for her subjects to reclaim a personal identity, interiority, and agency.

In addition to these three series of works on canvas, the LED neon-light installation of suited, invisible feminine figures emboldens Haldeman's capacity to illuminate the viewer's imagination. Not far from the heart of the Shanghai French Concession, perhaps the illuminated figure is a career woman by day, secret agent by night, swinging her hips as she trots along the streets, shaded under a Chinese parasol, sauntering to her nocturnal activities in a Wong Kar-wai film scene...

Haldeman's works can be read in association with a wide range of art historical references, from Barberini Faun, a Hellenistic sculpture of a sleeping male nude to a fiery, scribbled version of Claude Monet's Japanese Bridge. In the artist's own words, 'These two images embody what I search for when I make a painting: a muscular sensuality paired with a half-blind urgency that corrupts the familiar.' In particular, Kitagawa Utamaro's Ukyio-e prints of courtesans, who dwell within the "floating world" of the pleasure district, operate like advertisements, drawing in capital through images of an eroticized underclass. For Haldeman, Utamaro's encapsulations of his subject's individuated beauty, not only serve as a record of subtle human expressions, but also lay bare the utility of feminine aesthetics by recording women from ranges of economic classes, as well as depicting them in their private moments when they are not performing for clients.

For the works on view, Ivy Haldeman adopts a minimal visual vocabulary to generate the maximum amount of signification and invites the viewer into a performance with her tableau. Regardless of whether her subjects are imagined, objectified, or even fetishised in the conventional sense, Haldeman conceives of them as living things and translates them into expressions through which the viewer is invited to discover the strangeness of their own empathy.

Ivy Haldeman (b. 1985, Aurora, CO; lives and works in New York) received her BFA from the Cooper Union in 2008. Her work has been exhibited at Downs & Ross, The Frans Hals Museum, Gavin Brown's Enterprise, Paul Kasmin Gallery, among numerous others. Her practice has been featured in Artforum, Artnet, The Brooklyn Rail, The New Yorker, and The New York Times.

Sign up to be among the first to know when new exhibitions by Ivy Haldeman or at Capsule Shanghai open.