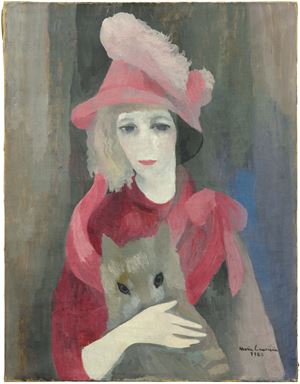 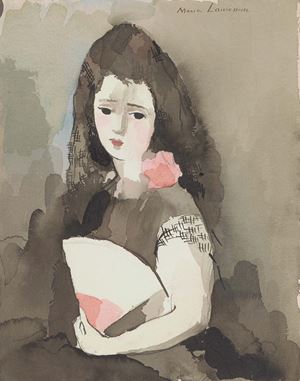 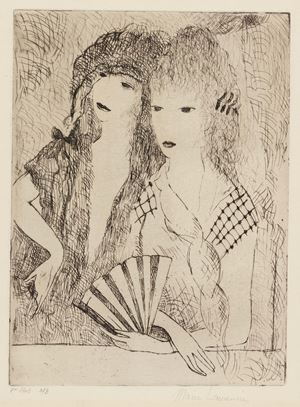 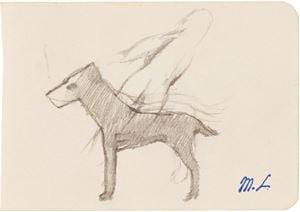 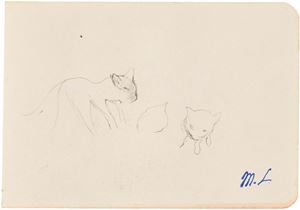 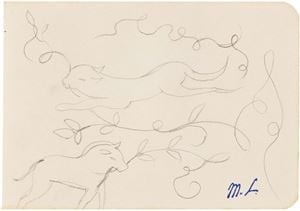 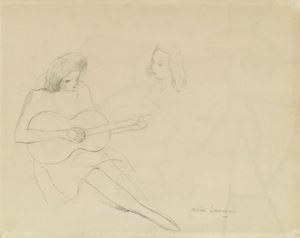 Galerie Buchholz is pleased to present the first exhibition devoted to the work of Marie Laurencin (1883–1956) in the United States since 1989 and the first in New York since 1956.

Surveying a slice of her prolific output of paintings, watercolours, drawings, prints, and book illustrations, dating from 1904 until 1953, the exhibition examines Laurencin's double strategy to disseminate her work as a consumable surrogate for herself and, at the same time, to generate a space of self-determination within received ideas about femininity and female painting.

As a popular society portraitist who also collaborated with leading members of the avant-garde, Laurencin generated ambiguous distances between her artistic identity and her work, and between what is represented and how this was received. These distances conferred on her a power to frame the conditions of her work's visibility–something that she staged with the motif, for example, of the curtain. It is precisely by operating from a chameleon-like position marked by deferral and remove that Laurencin is able to create an unsettled foil to masculine modernism. As she writes in her autofictional memoir, 'If I feel far away from painters it is because they are men–and men seem to me to be difficult problems to solve. Their discussions, their research, their genius, have always surprised me and without them nothing would exist; living in their shadow is possible, when one doesn't intend to imitate them.'

After training as a commercial porcelain painter, Laurencin later attended the Académie Humbert, where she studied painting and met Georges Braque, who became a supporter of her work and introduced her to the 'Bateau-Lavoir' group, and Francis Picabia, with whom she would collaborate on the first four issues of 391 while they were both living in Barcelona during World War I. She was included the 1911 Salon des Indépendents as well as the 1912 Maison Cubiste exhibition of the Salon d'Automne. Her New York debut occurred on the occasion of the 1913 Armory Show. Laurencin was represented by major modern art dealers throughout her lifetime, first by Wilhelm Uhde and Marius de Zayas and later by Paul Rosenberg and Pierre Matisse. Alongside her painting practice, Laurencin executed commissions for private residences (such as decorative architectural panels) and businesses (such as Helena Rubinstein's beauty parlors), and designed costumes and sets for the theatre (such as the Ballets Russes production of Les Biches).

Her early work, represented by Autoportrait (Self-portrait) (1908), Le Pont de Passy (The Passy Bridge) (1912) and La maison meublée (1912), features graphic lines and flattened figures, rendered in an intentionally naïve, Sunday painter style. Here she begins her inquiry into the stereotypes associated with female painting as both a critical reflection of them and a marketing operation promoting her work. That Laurencin chose the arched river bridge, a token motif of fables and European urban architecture, as a repeated motif in her works echoes the 'in between' social and critical positioning she both received and actively cultivated. Her work, and her identity as an artist, was neither here nor there, neither decorative nor avant-garde, 'between Picasso and Rousseau,' 'between the Fauvists and the Cubists, caught in a trap, the little doe.' The bridge repeatedly recurs as nondescript architecture in the fable-like settings of Diane (1921) and Fête champêtre (1928), and in late works such as Trois jeunes femmes (Three Young Women) (1953).

The repetition and reproduction of the homogenous 'look' of her subjects and colour palette are other formal devices that function as destabilising distancing strategies. In Deux amies (Two Friends) (1928), two very similar-looking women stand close together next to a canvas. The existence of the canvas vaguely suggests an artist-model relationship, confusing a clear reading of the identity of the subjects. The doubling of the women echoes the generalised repetition in Laurencin's practice, the reproduction of artist and subject, and one painting's relationship to every other painting. Undifferentiated likeness proliferates and reflects, and identity is divorced from expected resemblance. In fact, the distance between Laurencin's portrait resemblance to its physical subject, and its likeness to her paintings of anonymous young women, caused a few of Laurencin's sitters to reject their commissioned portraits, most famously Coco Chanel and Lady Cunard.

Laurencin's idiosyncratic program of uniformity is also enacted on the level of subject matter. Storybook characters–the goddess Diana, Queen Marie de' Medici, the Princess of Clèves–fungibly interchange with self-portraits, commissioned portraits, and portraits of Suzanne Moreau, Laurencin's housekeeper. This interchange is embodied clearly in La femme-cheval (The Woman-Horse) (1918), her self-portrait as a mutant femme peintre, a hybrid creature of her own making, fit to corral her progeny. Laurencin's work in print, book illustration, decorative arts, and theatre design further supports her strategy of omnivorous proliferation, reproducing 'the young woman' in different scales and contexts, and thus complicating the distinctions between innovation and cliché, painting and female painting.

The exhibition features a number of important loans from the Fondation Musée Marie Laurencin in Tokyo, Japan, for which the gallery and curator express great gratitude. Marie Laurencin's last solo exhibition in the United States took place at the Birmingham Museum of Art, Alabama, in 1989 and in New York at Paul Rosenberg & Co. in 1956. Since then, significant institutional exhibitions on Laurencin's work have taken place at the Musée Marmottan Monet, Paris, France (2013), Musée Marie Laurencin, Nagano, Japan (2003), and the Fondation Pierre Giannada, Martigny, Switzerland (1993–1994).

An exhibition organized by Jelena Kristic

Sign up to be among the first to know when new exhibitions by Marie Laurencin or at Galerie Buchholz open.