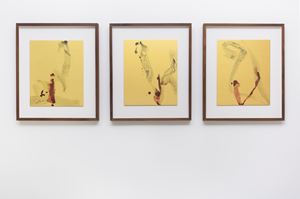 We are pleased to welcome Gabriel Orozco’s seventh solo exhibition at Galerie Chantal Crousel, from September 7th to October 5th, 2019.

A series of new works created in Mexico City and Tokyo will be presented: sculptures in obsidian and tezontle; drawings and watercolours on Japanese calligraphy boards (shikishi), and tempera on canvas paintings.

The artist’s practice draws nourishment from his daily environment, culture and nature he finds in his surroundings. He incorporates local materials and artisanal know-how into his work to create his own lexical system.

Hence his encounter with Balinese stone-carvers gave birth to the 'Dé' series previously shown at Galerie Chantal Crousel in 2017: sculptures hand-carved in limestone whose forms are simultaneously intuitive and geometric; As Briony Fer writes, 'Carving, sculpture’s oldest skill, provides the means to destroy a square stone block and fill it with holes: which means putting in play the right angles of a cube together with the circular rotations of the parts that have been cut away in order to expose the empty core that is the inside.'1

The obsidian and tezontle sculptures presented in this current exhibition, are a continuation of this reflection, which began in Indonesia and continued in Mexico City. Like limestone, these typical rocks from Mexico are evidence of a tradition, a history, and a territory. 'The diversity of the mediums of the sculpture reflected a diversity of fabrication sites. A French automobile garage, a South Korean sign-shop, and a British billiard table factory certainly have nothing in common other than their role as sites for making work by Gabriel Orozco. […] There is no way to identify a work by Orozco in terms of physical product. Instead it must be discerned through leitmotifs and strategies that constantly recur, but in always mutating forms and configurations.'2

The starting process for this new series of sculptures is the same as for the limestone works: the artist used a compass to trace circular geometrical shapes on the stone. However, in this instance, mechanical tools were used to carve the valuable stones. Motifs and shapes are always similar, only the medium varies.

The circle, axes, and the rotative motion seem to dominate Orozco’s oeuvre, less as a pictorial motif than as a work process or strategy. 'A circle is not a form in a composition, let alone an aesthetic form that reveals the hidden order behind things, but an instrument or operation.'3

In this case, the circle strategy serves new sculptures, fluid and porous, drawing upon the artist’s recent wanderings. In these works, geometry encounters geology.

For over ten years, his pictorial practice has continually attested to a spatial thought system. It is the result of a strategy, or of pre-existing rules of the game. However, the system may occasionally venture off-trail. Éclaircie (2019), begun in 2008, introduced new, unexpected colour and texture palettes. Also, the circles no longer accumulate, but overlay each other, their edges forming a 'fractured curvature made up of colour segments that seem to float on a white ground.'4

In the case of the work mentioned above, a metallic-like background, nearly coppery, that the artist rubbed and reworked, until rebirth of the canvas.

Yet, these pieces are always well organised in a grid-like pattern. Two of the watercolours in the show (Untitled and Untitled) attest to this. Although the result of the procedure appears intuitive, it is nevertheless the product of a strict system.

In the canvas paintings (Tigerfish, L'envol and Mémoires de plantes), thoroughness establishes a subtle dialogue with perceptible reminders of nature, its colours, movements and counter-movements.

A series of watercolours–Suisai in Japanese–is exhibited in parallel with these paintings. As usual, he uses the materials around him to create. In this case, he adopted boards used for Japanese calligraphy. Their gilded surface enhances the properties of the watercolour. The motion of the raised hand is an appeal. The strict grid and circle structure seem to have disappeared; the geometric system has mutated somehow. 'Even if the object itself doesn’t show a circle, there is a circular movement in the process of the making and the way of circular action and a circular or cyclical way of working.'5

The process is still organic, with a visible trace. However here, the shapes are free and the spots flow, accumulating and spreading. If we see mainly abstract compositions, we sense the presence of flowers, plants, but also landscapes.

The watercolour technique enables Gabriel Orozco to discover new shapes, more traditional, more turbulent. They allow him to apprehend painting in a different way, and to focus on both gesture and medium. Playing with the multiple degrees of opacity and transparency offered by watercolour and its diluted substance, spinning brushstrokes bring the work to life.

In 2019, Gabriel Orozco was chosen to orchestrate the transformation of Chapultepec Park in Mexico City into a nerve centre at the crossroads of art, culture, and nature.

Sign up to be among the first to know when new exhibitions by Gabriel Orozco or at Galerie Chantal Crousel open.