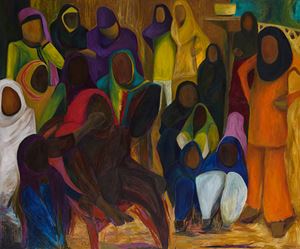 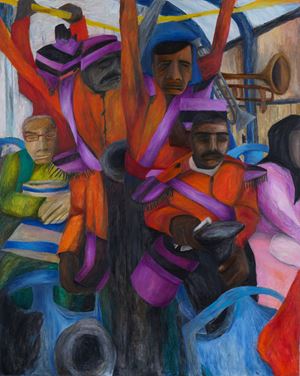 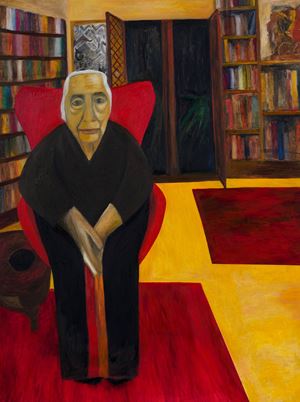 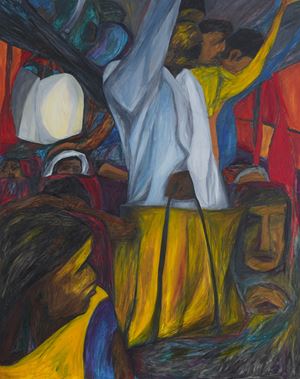 Among the many things encountered in Aban Raza's paintings and prints, there are axioms for this fragile moment in history. Much like the seams of the titular luggage, an implosion is imminent; objects of daily life strewn on tables and shelves signal a tender rootedness, as if waiting to be packed and moved elsewhere. The air is potent, nestled precariously between entangled limbs on buses and in quiet shafts of light; the air is heavy between the eyes of women and the walls of their homes; the air is limp as decay encroaches on wilting flowers—red roses to be precise, a symbol as much as an idea for the close of an era in modern Indian history.

(Excerpted from the curatorial note of "Luggage, People and a little space", written by Arushi Vats)

Born 1989 in New Delhi, Aban received her Bachelors and Masters Degrees in Fine Art at the College of Art, New Delhi. She is a recipient of the Somnath Hore Award (2013), the AIFACS Award (2014) and a Lalit Kala Akademi Research Grant (2013-14). Among other exhibitions, her work has been shown in the First International Print Biennale, Lalit Kala Akademi, New Delhi (2018) and Threshold, Art Heritage, New Delhi (2013). Luggage, People and a little space is Aban's first solo exhibition.

Luggage, People and a little space

Sign up to be among the first to know when new exhibitions by Aban Raza or at Galerie Mirchandani + Steinruecke open.