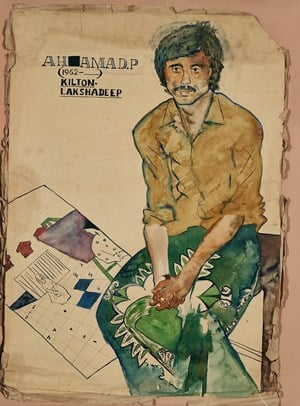 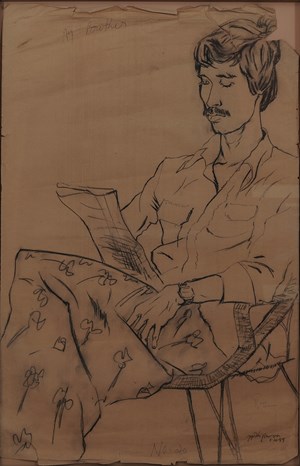 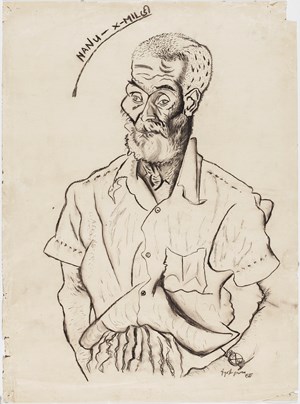 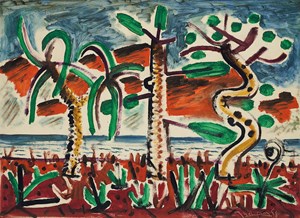 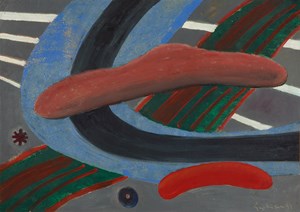 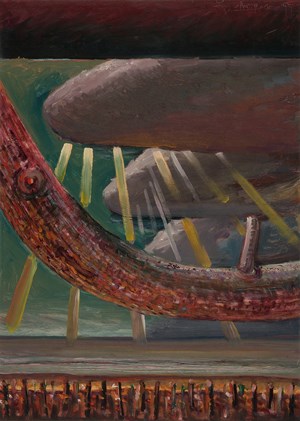 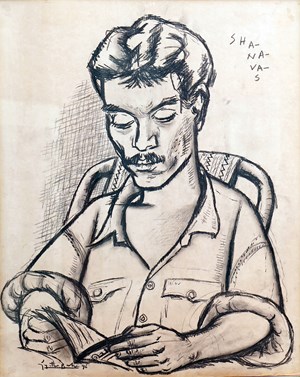 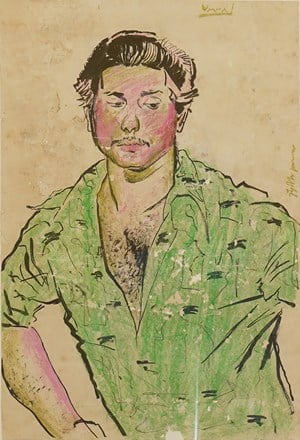 As viewers, we put ourselves in a privileged position in relation to the paintings and drawings we look at in a gallery. What if these works were looking back at us? What would they say to us? If the works in question are the early works of V. N. Jyothi Basu, one of India's most accomplished yet most reticent artists, they would tell us that their ostensible subjects (the sitter for a portrait or the locale for a landscape), though important, are not the only reason they exist. Look, instead, at how differently ink and charcoal spell the emphasis of a line, how dry pastel snags and whorls in the grain of paper, how oil paint settles on paper instead of the more customary canvas, and how deft watercolour accents illuminate a pencil drawing. Here is an artist who is manifestly in love with his materials, the sensuous palpability of the powders, pigments, fluids and surfaces from which he crafts his enchantments.

This exhibition presents, for the first time, an ensemble of Jyothi Basu's early works. Born in 1960, the artist grew up in Thrissur and has lived in Trivandrum, Baroda, and Bombay; he now lives in Baroda. He was one of the younger members of the Radical Group, that fraternity of painters, sculptors, bricoleurs and provocateurs who briefly, during the late 1980s, revolutionised contemporary Indian art practice by introducing heterodox concepts and media into their work, and by working with subaltern communities. In the 1990s, Jyothi Basu turned away from art-making and did not exhibit his work. During that decade, he worked as a freelance set designer for the Asianet and Kairali television channels in Kerala. He returned to art in 1998.

In these works from the 1980s and 1990s, exhibited with a book of drawings from 2005, we find portraits of friends and colleagues, phantasmagorical landscapes, and scenarios aligned with speculative or science fiction. The portraits are warm and tender, the artist-self fully and empathetically released towards an Other that is no longer an Other, because she or he has been enveloped in a love that speaks through the evocation of detail: the shape of lips, a trailing hair, a pensive expression, a fold of skin, the creased fluency of a dress.

Some of these works are prescient of the world to come – the future of ecological catastrophe and rampant militarisation that is already upon us. The series entitled 'Studies for Invasion' draw us into a world of battle plans and war games, which might be scenes from an actual conflict or programming for a video game. In this series, as in the 'Resurrection (Rays)' series, the artist transits from panorama to close-up, denying the viewing eye a sovereign stability. Planes or UFOs come in to land on fog-blurred runways, a planet is bisected, a boomerang promises apocalypse or redemption. Many of the artist's grids or spatial arrangements are departures from the traditional board game of chaturanga, itself a civil translation of military confrontation.

The geographical basis of many of Jyothi Basu's vistas is the view from his childhood home in Vallapad (literally, 'the Mark of the Net'), Kerala, as it changed with the hour and the season: coconut groves, the sea receding from the beach, stars blazing in the night sky. And at the heart of his oeuvre is the human figure, disguised, camouflaged, translated. Look, for instance, at his columnar shapes – are they totem poles or genetically modified tree trunks? Look closely and you will find that faces, eyeballs, toes, orifices emerge from their alternately jewelled and roughened surfaces. The tree has long been a symbol of suffering and wisdom, endurance and resurrection. In Jyothi Basu's handling, it records ecstasy and agony, hurt and healing. Gashed, swollen, yet resilient, it asserts its right to grow and flower. The figure may not appear under its own banner in Jyothi Basu's work, but the body's encounters with life and the world are certainly registered.

V. N. Jyothi Basu's work is developed around the moment of the about-to, the infinitesimal interval between what happens and our realisation of the fact. In his world, in the blink of an eye, tree-trunks grow, rockets speed towards their targets, cities are built, planes are about to land, figures are about to take off into the sky, snakes are about to shrug off their skin, coded signals wink on, about to spell a sentence. That is the fraught, fateful moment when the pencil, the charcoal stick, or the brush touches down on paper.

Portraits and Landscapes on Paper

Sign up to be among the first to know when new exhibitions by Jyothi Basu or at Galerie Mirchandani + Steinruecke open.