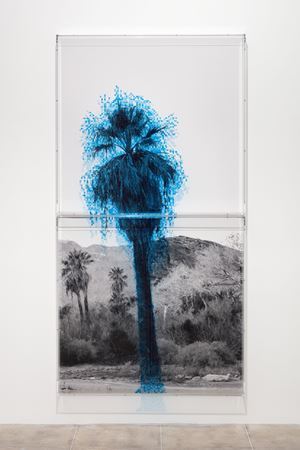 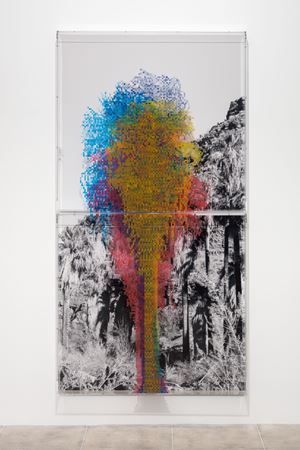 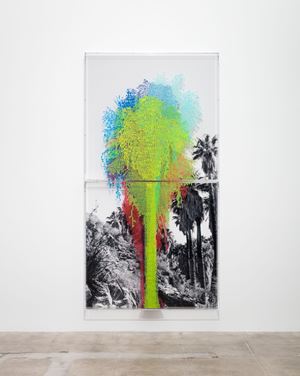 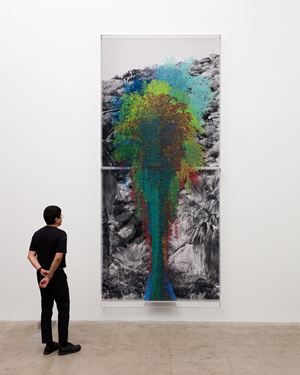 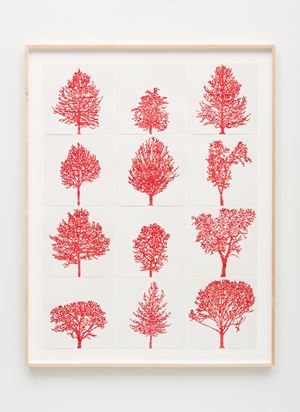 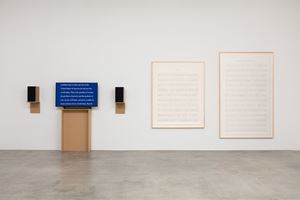 Los Angeles...Beginning 14 September, Hauser & Wirth will present Palm Trees and Other Works, its first exhibition with Charles Gaines, noted American artist, educator, and recipient of the 2019 Edward MacDowell Medal. This exhibition will debut new works from his signature 'Gridworks' series. Employing native trees from Palm Canyon near Palm Springs, these luminous works have evolved from Gaines's rigorous application of his numbered systems–a process central to an esteemed, decades-long practice that interrogates the relationship between the object and its subjective realms. Gaines will also present a new series of watercolors based on assorted trees as well as Manifestos 3 (2018), the latest contribution to a series from which earlier examples reside in the permanent collections of The Museum of Modern Art, New York, and Hammer Museum, Los Angeles.

A pivotal figure in the field of conceptual art, Gaines has long employed a generative process to create series of works in a variety of mediums. By creating space between a specific symbol and the systems applied to its representation through measurable values of color, Gaines's distinctive approach forges a critical link between first generation American conceptualists like Sol LeWitt and subsequent generations of artists, including Gaines's students Edgar Arcenaux, Andrea Bowers, Mark Bradford, and Sam Durant, among others who are pushing the limits of conceptualism today. Speaking about his longstanding commitment to unveiling the paradoxes of human visual understanding, Gaines said, 'The system has never changed, but the outcome is always different.'

On the occasion of this landmark exhibition and in keeping with his revered status among California’s practicing artist academics as a faculty member at CalArts, Gaines will transform The Book & Printed Matter Lab at Hauser & Wirth Los Angeles into a classroom, bringing his mastery of the field into a public setting. He will conduct a ten-part lecture series on the tenets of aesthetics and critical theory in art, with his lectures recorded and played on loop throughout the course of the exhibition. Additionally, Hauser & Wirth Publishers will release a new monograph on Gaines with contributing text by David Platzker and interview by Cherise Smith that charts the evolution of the palm tree in his work from the 1980s to the present.

Images of trees have figured prominently in Gaines’s practice since the mid-1970s, when he first began plotting their forms through systems of numbered grids in the series 'Walnut Tree Orchard' (1975–2014). His methodical examination continues in the 'Numbers and Trees' Plexiglas series, which began in 1987. Here, Gaines selectively layers paint on acrylic sheets atop black and white photographs of corresponding landscapes with trees. Following this process, each tree is assigned a distinctive color and a numbered grid that reflects the positive space of the tree in the original photographic image. The majesty of the process accrues in the completed painting, where breathtakingly complex layers of representation collapse into a single image.

Palm Trees and Other Works will feature Numbers and Trees: Palm Canyon, Palm Trees Series 2. Standing at nine and twelve feet high, these ten Plexiglas works adhere to Gaines’s signature process dating back to the 1980s: a black and white photograph provides the background for two, vertically stacked acrylic boxes on which he has meticulously plotted numbers and colours within a gridded framework, forming the image of his subject as prescribed by his process. Eliminating any gestural quality or presence of the artist’s hand, Gaines favors a sober presentation of his subject: he does not imagine reality, he evidences it.

The South Gallery’s Mezzanine level will host the largest compilation of Gaines’s watercolours to date, with four works each comprised of a grid of twelve assorted trees, assigned a distinct color: red, blue, green and magenta. Gaines’s artistic orthodoxy loosens in his watercolors: instead of collapsing multiple trees onto a single plane, each sheet features a single tree meticulously composed of tiny painted cells–an artistic codex in and of themselves. Each grid of twelve breaks down the multitude of layers that comprise the larger works exhibited on the main floor below.

Reflecting on his personal history, Gaines observed that ‘one thing that made me different from other conceptual artists is that I was not shying away from language or meaning or content’–a truth perhaps best exemplified by Manifestos 3 (2018). This work functions as a systematic transliteration of revolutionary manifestos into musical notation. The installation is comprised of two parts: a single channel video monitor that scrolls the manifesto texts, and two large graphite drawings of the music scores that were produced by the translation. Each text scrolls in succession on a monitor while a recording of the music produced by Gaines’s system plays. Created by way of a rule-based system, Gaines transcribes letters ‘A–H’ from the text into their equivalent musical notes. The use of the letter ‘H’ represents the code used in early Baroque tradition for B-flat. All other letters and spaces between words are noted as rests or silent beats. While the resulting composition does sound intentional, it is controlled only by the preconceived notation system that follows the compositional structure of language. This produces the fluidity that the audience hears.

The two political texts transcribed in Manifestos 3 are Martin Luther King, Jr.’s speech given at the University of Newcastle upon Tyne (1967), wherein King nominates racism, poverty, and war as the three most urgent problems of the contemporary world, and James Baldwin’s essay 'Princes and Powers’ (1957) which describes the dominating power of cultural control. These two manifestos are systematically translated into the above described musical notations as written and arranged for piano by Gaines and edited by John Eagle.

This series not only takes social justice and politics on as its subject, but also as it may critique our understanding of the relationship of the practice of art and politics. By converting these powerful and poignant texts into music, Gaines unites the rational, mathematical, and lyrical structures of music with the irrationality of violence, racial tensions, and social injustice. The predetermined process developed by Gaines widens the distance between concepts and their interpretation, effectively removing the artist’s subjectivity while empowering the viewer’s. The combination of the elegiac music with the stirring words of the scrolling manifestos creates an unexpected conflict for the viewer; it is within this dissonance that the indelible truths of Gaines’s work are revealed.

Charles Gaines lives and works in Los Angeles, where he has been a member of the CalArts School of Art faculty since 1989. He has been the subject of numerous exhibitions in the United States and around the world, most notably a mid-career survey at the Pomona College Museum of Art and the Pitzer College Art Gallery in Claremont CA, as well as a museum survey of his Gridwork at The Studio Museum, Harlem NY, and Hammer Museum, Los Angeles CA. Gaines’s work is included in prominent public collections such as the Museum of Modern Art, New York NY; Whitney Museum of American Art, New York NY; The Studio Museum, Harlem NY; Hirshhorn Museum and Sculpture Garden, Washington DC; Museum of Contemporary Art, Chicago IL; Hammer Museum, Los Angeles CA; Los Angeles County Museum of Art, Los Angeles CA; Museum of Contemporary Art, Los Angeles CA; San Francisco Museum of Modern Art, San Francisco CA; Städtische Galerie im Lenbachhaus, Munich, Germany; Galerie der Stadt Esslingen, Esslingen, Germany; Villa Merkel, Esslingen, Germany; and Lentos Museum, Linz, Austria. His work has also been presented at the 1975 Whitney Biennial and the Venice Biennale in 2007 and 2015. In addition to his artistic practice, Gaines has published several essays on contemporary art, including ‘Theater of Refusal: Black Art and Mainstream Criticism’ (University of California, Irvine, 1993) and ‘The New Cosmopolitanism’ (California State University, Fullerton, 2008). In 2019, Gaines received the 60th Edward MacDowell Medal.

Palm Trees and Other Works 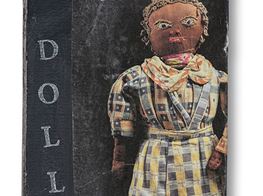 Below you'll find a fun mix of museum and gallery shows, performances, and film screenings taking place over the next few months in the greater Los Angeles area. We know how hard it is to keep track of all that's going on, so we've compiled some of the events that stood out to us and organized them according to theme and type. We're hoping...

Sign up to be among the first to know when new exhibitions by Charles Gaines or at Hauser & Wirth open.