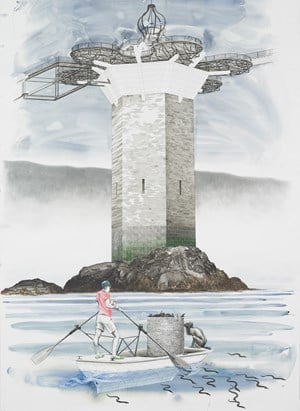 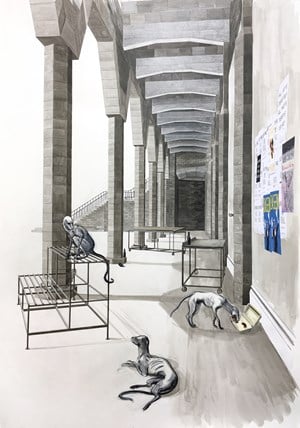 In 2004, Charles Avery embarked on what will be a lifelong project called The Islanders; an all-encompassing and immersive investigation into a world that functions in parallel with our own. The Island has its own inhabitants guided by their own philosophies, customs and idiosyncrasies, all of which are expressed through Avery’s drawings, sculptures and text.

The Island, resembling at times the Scottish Hebrides, and at others the East End of London, is located ‘in the middle of an archipelago of innumerable constituents’ and at its heart is the port city of Onomatopoeia. This town was once a stepping off point for pioneers and travellers, then a bustling boomtown, then a slum in a state of extended decline. And now, in the fictional present, it is a tourist destination and a regenerated city of culture bustling with life and ringed by an elaborately constructed City Wall. It is this edifice; the protective barrier and also the entrance to The Island, that will be explored in Charles Avery’s latest exhibition The Gates of Onomatopoeia.

Alongside architectural drawings of the city wall, with its monumental hexagonal towers, there will be also be drawings depicting The Islanders going about their daily lives; trading in the city market place at the edge of the city, sitting in the Union café, beneath The Union Tree, and engaging in less respectable pursuits–brawling and fighting–in the dark recesses of the city wall's arches.

The Union Tree, has landed in the gallery direct from The Island. Standing at almost six meters in height, and made of steel, with brightly coloured glass lanterns hanging from its angular branches, it dominates the space. Avery’s latest specimen is part of an ongoing exploration of the ‘Jadindagadendar’, an inorganic self-illuminating garden that forms the city park of Onomatopoeia.

Each element of this garden arises from a simple mathematical idea. In Avery’s words ‘The Union Tree is an expression of Euclidean space, its branches extending resolutely in accordance with the xyz axes, supporting luminous glass forms, that might represent various geometrical solutions to the ultimate nature of the universe. Part plant, part public light, part temple The Union Tree can be experienced as an artwork, a space within which to sit and think, or a point for romantic assignations.

As the critic and curator Tom Morton has said of The Jadindagadendar: 'The garden is commonly a place where nature is transformed into culture, and where the cycle of life and death might be observed. It is a place where knowledge is gained, innocence is lost and found, and troubles begin and end–we might compare and contrast the verdant grove in which Plato founded his Academy, the Eden of the book of Genesis, and the fertile plot where Voltaire's Candide finishes up the conclusion of his worldly trials. The Jadindagadendar continues the tradition of the garden as a philosophical testing ground'.

The Gates of Onomatopoeia

Sign up to be among the first to know when new exhibitions by Charles Avery or at Ingleby Gallery open.