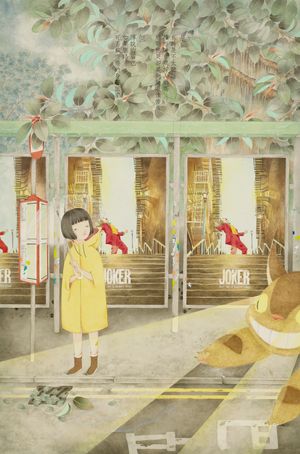 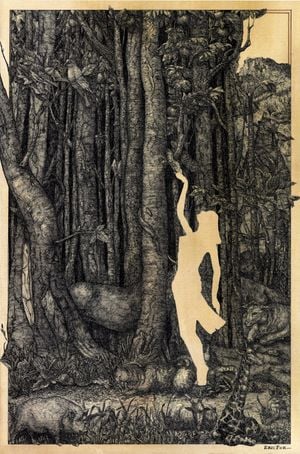 Karin Weber Gallery is excited to announce Now Showing, a group show by eleven Hong Kong artists. Cinema, the seventh art form as defined by early 20th century Italian film theoretician Ricciotto Canudo, is becoming increasingly relevant with the expanding role of digital media in our lives. Films entertain, comfort inspire, steer us towards new possibilities and reveal the aspirations of a generation. They may poignantly capture pain and sorrow, reflect bitter realities and sheer hopelessness, whilst at other times letting us escape into fantasy worlds and lighthearted, happy times. The nature of the medium and advancements in technology furnish films with the magic of make believe, creating realities that unfold in front of our very eyes.

The eleven local Hong Kong artists participating in Now Showing have all selected a film they consider the most memorable or meaningful to them, to use as inspiration for a bespoke work of art. Not surprisingly, the film genres covered are extensive, and relate to the artists' own upbringing, their life experiences and the significant changes that Hong Kong has undergone in recent years. To the surprise of many of the artists, their films have frequently captured the essence of certain life moments and, in some cases, even predict their outcomes — for example, some of the Hong Kong movies made in the 1980s such as Long Arm Of the Law (1984) highlight the culture clash between Cantonese speakers in Hong Kong and Mandarin speakers in mainland China.

Sign up to be notified when new artworks and exhibitions at Karin Weber Gallery are added to Ocula.
Sign UpLogin