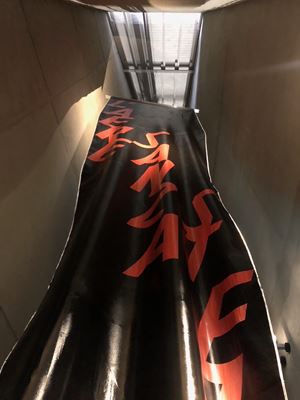 KEWENIG presents Room #8 with Elevation, a site-specific installation by Lars Breuer (Aachen, 1974) staging a ten metres high cotton banner suspended from the ceiling. Capital letters constituting the mottoes 'L'AERE SANZA STELLE' and 'RISE TILL WE FALL' are revealed intermittently between the changing folds of the canvas. The presentation is part of KEWENIG’s recent exhibition format 12 Rooms, a monthly rotating artist programme in the enclosed room between the gallery and the adjacent building.

The core of Lars Breuer’s practice rests on a typography made up of an array of literary and art historical references that lay the foundation for his abstract compositions–usually in the form of large-scale murals or paper banners. While bringing to mind pop culture, street art, billboards, Futurist slogans and alike, Breuer’s text-based works never lack erudite allusions–most often closely connected with his interest in language philosophy. For his murals and free floating installations Breuer works with contrasts: colour contrasts such as black and white, but also by juxtaposing contradictory concepts, drawing attention to the equal value of seemingly opposed sign systems.

For Room #8 Lars Breuer created a large scale installation that trails the architecture of the narrow, towering concrete space of the gallery. On a semantical level the respectively red and blue statements 'L’aere sanza stelle' (The sky without stars) and 'Rise till we fall' likewise point to the ascending movement and soaring depth of the room. The large format and the italic font style complicate the readability, so that the sequence of letters becomes an ornament and the abstract qualities of the painting interfere with the semantics of the words. As a continuum in Breuer’s oeuvre, the principle of confrontation derives from a blend of high and low culture. For 'Elevation' Breuer opposed Jonas Blue’s pop lyrics 'Rise till we fall' to Dante's Divine Comedy, 'Inferno Canto III'.

Lars Breuer lives and works in Cologne. He studied Freie Kunst/ Liberal Arts at the Münster and Düsseldorf Art Academies, as well as Philosophy and Art History at the Heinrich-Heine University in Düsseldorf. From 2004 to 2010 he was co-operator of the artist collective and exhibition space KONSORTIUM in Düsseldorf. Lars Breuer held solo exhibitions at the Ludwig Forum Aachen, the Kunstverein Paderborn, the Audi Kunstraum Ingolstadt, the Temporary Gallery Cologne, and in galleries in Copenhagen, Melbourne, Munich and Zurich. He participated in a number of group exhibitions at the Justin Art House Museum, Melbourne; the Museum for Concrete Art, Ingolstadt; The House of Arts, České Budějovice; the Kaunas Biennial; the Room East Gallery, New York; the Museum Morsbroich, Leverkusen; and the ZKM Center for Art and Media | Museum für Neue Kunst, Karlsruhe.

Sign up to be among the first to know when new exhibitions by Lars Breuer or at KEWENIG open.