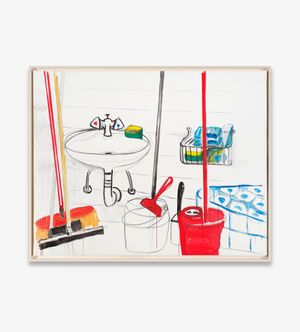 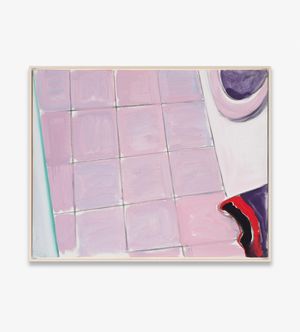 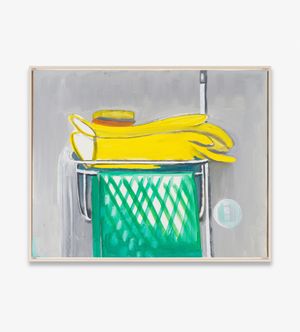 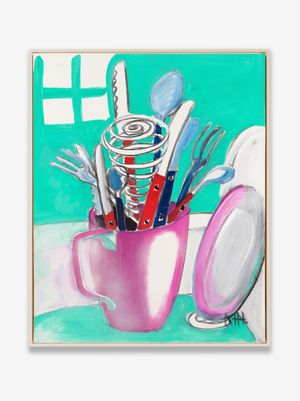 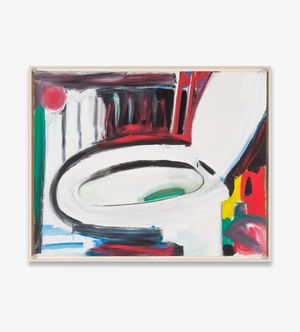 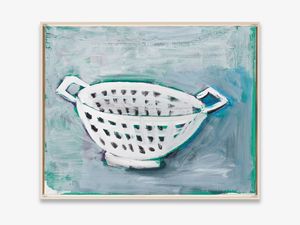 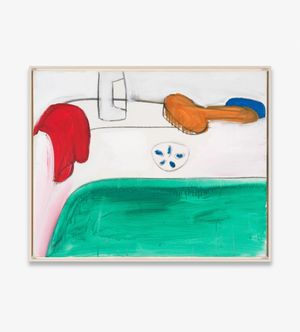 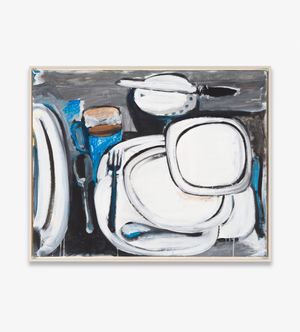 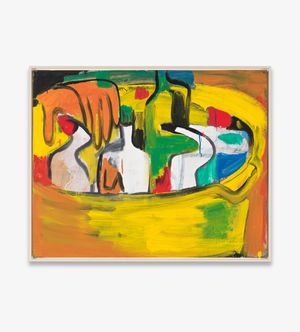 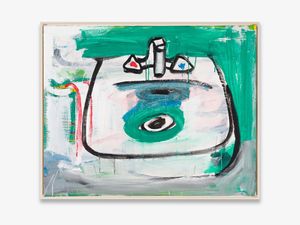 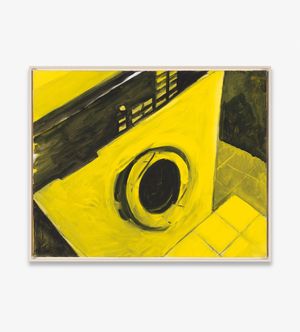 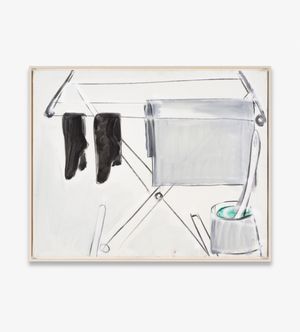 In his series of works KLEINE BILDER AUS KÜCHE UND KLO (2002-2003), Karl Horst Hödicke turns away from the outside world and enters the domestic sphere. Hödicke captures everyday situations and objects such as cleaning supplies and coffee machines that otherwise receive little attention in artistic representation. Indeed, his paint- ings of urban spaces also often depict the trivial or unsightly, such as construction pits and traffic signs. His "little paintings from kitchen and toilet" are an amplification of this principle into the realm of the entirely unglamorous. Motifs such as the cleaning gloves turned into "hand puppets" are the most obvious proof of the subtle humor that constantly pervades Hödicke's work.

Hödicke exposes the view behind the scenes of the domestic facade. An open toilet seat can be found here, as well as cleaning gloves hung over a bucket to dry or an assembly of toiletries on the sink. Human protagonists are not visible, but they leave obvious traces of their actions: a piece of clothing has been left next to a washing machine as if it had been hastily filled or emptied, the freshly fried egg is ready to be eaten at any moment, a pan has been left on the stove and the beverage carton is already torn. The depiction of kitchen and toiletry items has a long tradition in art history dating back to the 16th century. Beyond that, Hödicke's stylistic proximity to Pop Art is evident not only through the strong colors, but also through the choice of motif, as Claes Oldenburg, for example, had already discovered the toilet as a subject for his art in the 1960s.

The tension in Hödicke' works arises to a considerable extent from their medium. Painting is, ideally and techni- cally speaking, the antithesis of the snapshot; not so with Karl Horst Hödicke. He says of himself that he is a fast painter. He never uses oil paints, their texture is too thick, thus making the painting process too slow. Hödicke mixes his own colors so that he can apply them directly, creating the almost sketchy lightness of his style. The gestural power of Hödicke's painting is also evident in the works shown in the exhibition, as is the tendency towards abstraction. Three-dimensional objects become color surfaces and yet he remains connected to figura- tive painting, the objects always retain their recognizable form.

Hödicke has always consistently painted what surrounds him. And these are often the very mundane things of everyday life.

Sign up to be among the first to know when new exhibitions by Karl Horst Hödicke or at KÖNIG GALERIE open.