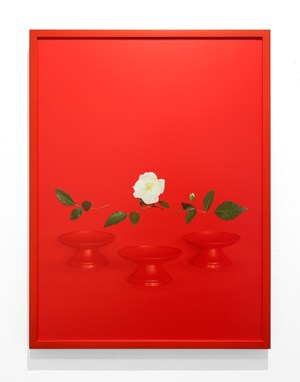 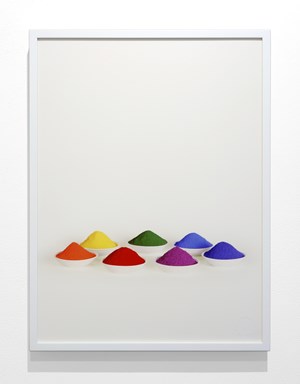 Cindy Sherman is quoted as saying 'I think it was important to Sarah for her work to be sublime and exquisitely beautiful: the lushness of the colour, the surface of the print itself, the frame-all very specific aesthetic decisions that enhanced each piece. The work transcended mere Cibachromes and referred to the act of seeing, from the mechanics of observation to the ephemeral illusions that are impossible to capture in a photograph.

Between 2000 and 2012, Sarah Charlesworth (1947–2013) created a number of works in a small scale. This exhibition serves as the first survey of these pieces and encompasses works from five of her last series.

The 0+1 series are 'all white' full-colour photographs which explore thresholds of vision. Both the subjects of these images and the photographic realisation suggest beginnings or entry points into visual language.

In the 'Neverland' series, colour photographs of highly abstracted objects explore the boundaries between image and symbol. Arranged in a floating installation, these works describe a dream-like interior landscape, part house, part mind.

'Work in Progress' is a series which collapses the distinction between the image and the tools through which it is made. Light filtered through transparent paper is both the subject and the medium as it highlights the artist's camera and working tools.

These works use the photographic field as a ritual or meditative space. Employing simple materials and objects staged as offerings, they pay homage to the physical properties of art and celebrate the act of becoming.

Light, in both a physical and metaphysical sense, is at the centre of this body of work. Our expectations are questioned and confounded by optical inversions and visual illusions. These images lay bare the act of photography as they simultaneously mask and unmask the conditions of their creation. There is no neutral or objective point of closure, only the shifting perspectives of the observer and the observed. The making and the taking of a photograph is indistinguishable as each work celebrates the act of seeing.

Laurie Simmons wrote, 'With uncommon precision, Sarah scrutinised the photographic image from each and every angle, mining its history, context, media value, symbolic resonance, materiality, and-most poignantly-its self-creation as a phenomenon of focused and available light. She had a methodical manner and an analytical temperament, but somehow never lost her naïve wonder at the magic and multiplicity of the image. Despite her in-depth readings and technical expertise, her vast knowledge never diminished her fundamental awe of the endless potential of the photographic image at this specific moment in history.'

Sarah Charlesworth was a seminal artist in a generation that used photographic practices to explore issues concerning the language of images in contemporary culture. Charlesworth exhibited widely in the US and abroad, with over 50 individual exhibitions, a traveling museum retrospective organised by SITE, Santa Fe and presence in many major museum shows and collections. She taught photography for many years in the graduate program at the School of Visual Arts in NY, later served as faculty at Princeton University's Lewis Center for the Arts, and was the recipient of two National Endowment grants and a Guggenheim Fellowship. Charlesworth's work appears in the collections of the Metropolitan Museum, NY, the Museum of Modern Art, NY, the Whitney Museum, NY, the Solomon R Guggenheim Museum, NY, the Museum of the Art Institute of Chicago, the Museum of Fine Arts, Boston, MOCA, Los Angeles, the Walker Art Center in Minneapolis and many others. Her work has been the subject of major posthumous exhibitions including Sarah Charlesworth: Stills at the Art Institute of Chicago, IL and Sarah Charlesworth: Doubleworld at the New Museum, NY and Los Angeles County Museum of Art, CA.

Sign up to be among the first to know when new exhibitions by Sarah Charlesworth or at Krakow Witkin Gallery open.