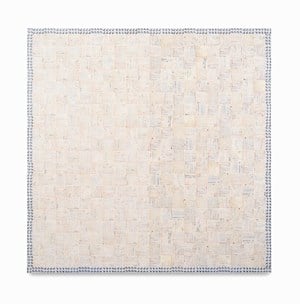 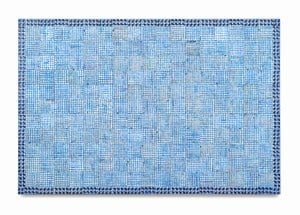 Lehmann Maupin is pleased to announce McArthur Binion's first shows in Asia, opening simultaneously in both Hong Kong and Seoul. The Hong Kong presentation will be presented jointly with Massimo De Carlo, which will also host an exhibition of Binion's work in their Hong Kong gallery. Spanning all three spaces, these joint exhibitions present an unprecedented opportunity to view new work by the 72-year-old American artist who has been garnering increasing international attention.

Over the course of his career, Binion has defied classification as an artist, beginning his highly distinctive, innovative, and self-referential practice at the prestigious Cranbrook Academy of Art in 1973. After graduation, Binion moved to New York City and found himself in the midst of a hotbed of artistic activity—socialising and working among artists such as Jean-Michel Basquiat, Brice Marden, and Sol LeWitt. Throughout the 1980s and 1990s, his style evolved from more gestural abstraction to include increasingly pared-down, colourful, and geometric abstraction. Binion's earliest incorporation of found material dates to the 1980s, when he realised the potential for building an 'under-conscious,' or layers of reference material, below his freehand painting. During the mid-1990s, Binion incorporated his first personal mementos into his work, and in the early 2000s he developed a unique amalgamation of these aesthetic elements, incorporating photocopies of pages from his personal address book, his birth certificate, and family photos beneath dense drawn or painted grids. These works made their international debut in 2017 at the Venice Biennale.

For Binion, personal documents represent the sum total of one's social life: relationships, citizenship, vocation, and family. In his newest Hand:Work:II paintings, Binion's insertion of his hand in repeated sequences of intricately layered mark-making reveals the time-consuming and laborious nature of his practice, illuminating the myriad of gestures and movements he condenses into a single painting. The bold colour palette chosen for these works is also self-referential, and harks back to his earliest paintings of the 1980s when he developed his 'under-conscious' approach. In these works Binion has recreated the brightly saturated hues of his earlier paintings in colourful ink washes poured and spread across the photocopied pages of his address books from that period. Through the incorporation of his hand as a self-generating subject, Binion pushes his work into new conceptual territory, expanding his repertoire to include performative self-portraiture. In recent years, Binion has emerged as an increasingly important artist of his generation, combining the post-minimal embrace of new, commercial grade materials (in Binion's case, the oil stick), with a more personalised approach to the austere, formal devices of minimalism, realised through the incorporation of his personal history into these deceptively simple paintings.

Sign up to be among the first to know when new exhibitions by McArthur Binion or at Lehmann Maupin open.