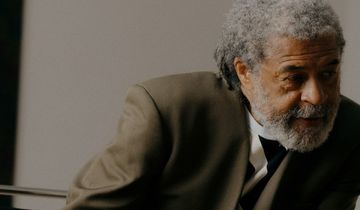 For the past 40 years Chicago-based abstract artist McArthur Binion has been producing mixed media works that marry the language of rhythmic Minimalist abstraction with personal memory and autobiography.

Born to a large family (eventually comprising of 11 siblings) living in rural Mississippi in 1946, he was raised in Detroit, where his family moved in 1951. Binion received his BFA from Wayne State University before studying at Cranbrook Academy of Art, where he met Minimalists Dan Flavin and Ronald Bladen. Subsequently relocating to New York, he steadily began to emerge on the dawning Soho art scene, exhibiting in New York at Artists Space in 1973 in a group exhibition he was selected for by Bladen, and which was co-curated by Sol Lewit and Carl Andre.

Amidst a group of contemporaries in New York, which also included artists like Jack Whitten (with whom Binion shared an interest in striated surfaces) and Frank Bowling, who were exploring fusing abstraction with identity through alternative abstract painterly techniques, and in a time when the possibilities of abstract painting were being re-negotiated, Binion was determined to create his own formal language. He developed a style of 'action painting' that entailed pressing wax crayon onto aluminium or wood, creating minimal but textured surfaces. Works such as Icecicle: Juice (1976, oil stick and Dixon crayon on aluminium) use this process, exploring contrasts of texture and colour within the geometric grids usually associated with Minimalist-style painting. Binion's deployment of the grid positions his practice within the legacy of Modernist masters such as Kazimir Malevich and Piet Mondrian, and on the same spectrum as contemporaries such as Brice Marden and LeWitt; however, Binion has rejected the notion of his work being a contemporary extension of the Minimalist practices of the late 1960s and early 1970s. He was instead interested in exploring narratives through colour, form and process. His painstaking and laborious process of pressing the crayon or oil stick onto wooden or aluminium supports is a performative action that has been related to his Southern, rural upbringing where as a child he used his hands in repetitive motions to pick cotton.

As his style developed Binion increasingly weaved into it an autobiographical element. In 1973 he created a series of works entitled 'Circuit Landscape' (1973), which alludes to his upbringing on the Mississippi cotton farm where he lived before he moved to the heart of heavy industry in Detroit, the grids in each painting giving the impression of abstracted aerial views of rural landscapes. The work titled Ghost: Rhythms (1974–1975, oil stick and Dixon wax crayon on aluminium)—an exploration of warm and cool tones featuring black and muted blue vertical stripes—alludes to his childhood memories of stories of ghosts and family histories told by his mother and aunts. Binion has related his work to a type of bepop, noting that while he is not influenced by jazz music directly, the rhythmic patterns of lines visible in his work arrive from the same place as jazz. Donald Kuspitt writing for ArtForum in 2015 noted that Binion's use of line and colour is not for its own sake but in the service of personal memory and history.

In 1991, Binion, left the New York art world for Chicago, taking up a teaching position as professor of art at Columbia College Chicago from 1992 to 2015, but continuing to paint. Paintings from this period include the 'House: Works' (2000) and 'Stelluca' (2011) series, where he incorporated laser prints as a collaged ground on top of which he applied other mediums. Generally, during this period, he garnered little attention, until in 2012 he was the subject of a solo exhibition at Contemporary Arts Museum Houston entitled Perspectives 177: McArthur Binion (6 January–1 April 2012). Then in 2013, gallerist Kavi Gupta presented a solo exhibition of the artist's early work in New York, and around this time Binion's style also undertook a major shift, where he began to incorporate direct material references to himself within his geometric compositions. The ongoing 'DNA' series Binion started in 2013 carries the hallmarks of this development and also his current style: dense grids painted over a collage of photocopies of autobiographical documents such as a birth certificate and address book pages. In works from this series such as DNA: Study (2018, oil stick and paper on board) fragments of these documents seep through the dense quilt-like surface of intensively hand-drawn lines.

Binion's expressive style is equally present in his 'hand: work' series (2017–ongoing). In this series, outlines of hands are evenly distributed through dense grids. To the artist, hands '... are a place of origin'; we trace their outline as kids and through fingerprints they also connect to identification. Hands too refer to the idea of manual labour that in itself defines one identity, harking back again to the period of the artist's childhood spent picking cotton. His current Hand:Work:II exhibition, which is showing across Lehmann Maupin's Seoul (24 May–13 July 2019) and Hong Kong (22 May–6 July 2019) spaces, as well as Massimo De Carlo's Hong Kong space (22 May–31 August 2019), demonstrates his recent evolving variation of the motif. Works such as hand:work (2018; oil stick, ink, and paper on board) contrast the hand motifs in a yellow grid composition on the left with a similar grey arrangement featuring black-and-white photos of where he was born on the right. Such colour contrasts have been a regular component of Binion's works since the late 1970s and 1980s when he broke from his previous exclusively monotonal, monochromatic palette.

Ocula Conversation McArthur Binion: 'I didn't come from art history, I landed there' By Paul Laster, Chicago McArthur Binion reflects on his artistic trajectory from 1970s and 80s New York to Chicago and Lisbon.

View More Ocula Feature The Armory Show: New York Exhibitions to See in 2021 By Elaine YJ Zheng, New York Find out what's happening in New York beyond The Armory Show, which returns to New York from 9 to 12 September 2021.

Read More Ocula News What Are Galleries Showing in Aspen in 2021? Aspen, 4 June 2021 White Cube, Lehmann Maupin, and Almine Rech are among the global galleries heading for the hills this summer.