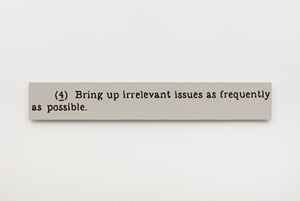 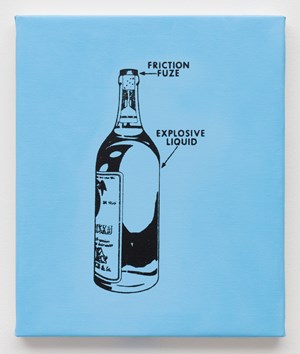 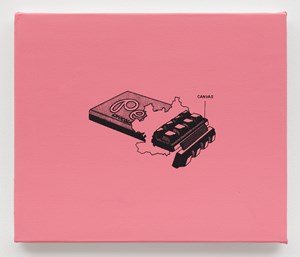 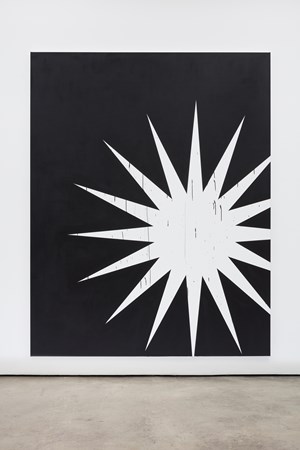 Gardar Eide EinarssonThe Spirit of Zen; a Way of Life, Work and Art in the Far East, 2019Acrylic and gesso on canvas
240 x 190 cm Maureen Paley 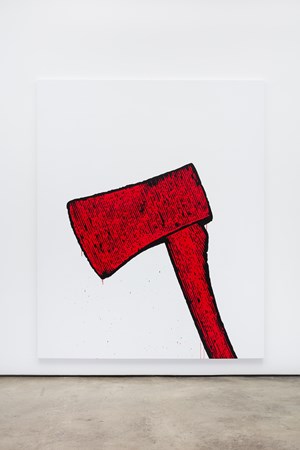 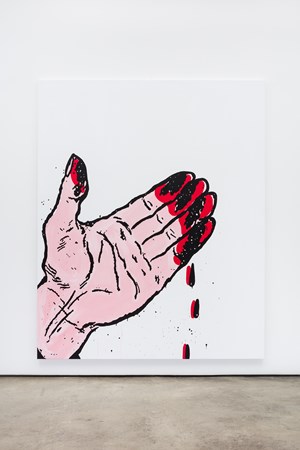 Maureen Paley is pleased to present the third solo exhibition by Gardar Eide Einarsson at the gallery.

The group of work that makes up the show revolves around concerns of how to relate, and how to resist, as an individual in the face of institutions and power structures whose ideologies might not align with ones own.

The painting The Spirit of Zen; a Way of Life, Work and Art in the Far East, based on an older paperback edition of Alan Watts seminal introduction of Zen Buddhism to western audiences, represents the strategy of exile, whether internal or physical, and with an autobiographical nod to the artist’s own relocation from the US to Japan. The painting itself consists of two opposing surfaces, either a mark, black paint applied roughly in layer upon layer, or no mark, white, where nothing has been done and one just sees the surface of the pre-primed canvas—i.e. of doing vs not-doing. The two other large scale paintings in the show are both, as with every artwork shown, based on found imagery, one a detail from a true crime book, one a detail from a comic book. They are both rendered in a kind of Virtual Reality POV (point of view) as if the viewer is looking at a hand with red stained fingers or an axe head. One a reflection on making art (paint) or making violence (blood) and one a reflection on the potential for transformation of everyday objects—doing work for the preservation of heat / life or doing violence. The either / or (doing / not doing) is extended to the act of painting itself by the way each canvas is divided into either painted areas or bare pre-primed white base. This stark binary leaves the paintings cycling back on themselves between painting as representation and painting as gesture as well as physical surface.

Two other series of works in the show reproduce material from recently declassified official US Government manuals on resistance strategies for citizens living under a hostile or illegitimate government. Both are ironically government-produced manuals for how to subvert government. The first are quotes from the Simple Sabotage Field Manual published by the Office of Strategic Services at the tail end of World War II. The quotes are reproduced on laser cut aluminium mounted on the wall, reminiscent of official signage, and describe ways in which 'the citizen-saboteur' might by indirect means counteract the workings of the regime they live under by adopting 'a noncooperative attitude' and making 'faulty decisions'. The second is a series of small paintings based on the (then classified) 1965 Department of the Army Field Manual FM 5-31, Boobytraps published by the Department of the Army, which describes ways that everyday harmless objects can be turned into explosives - though mostly in anachronistic, quaint and seemingly not very efficient ways.

The strategies described by the work in the show run the gamut from exile, through cultural production through acts of physical resistance while offering no clue as to their efficacy or their desirability. It also raises the question regarding what choices an individual should make in order to live a productive, moral life in precarious times.

Sign up to be among the first to know when new exhibitions by Gardar Eide Einarsson or at Maureen Paley open.