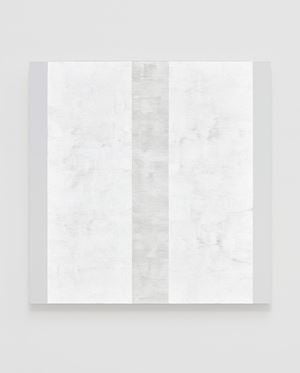 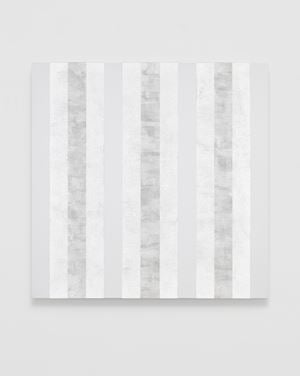 Palm Beach—Pace Gallery is pleased to present a solo exhibition of five new works by Mary Corse at the gallery's seasonal location in Palm Beach, Florida. Over the last five decades, Corse's work has continuously investigated perception, properties of light, and ideas of abstraction. This presentation features four paintings as well as a sculpture from the artist's 'Untitled (Beam)' series, and marks Corse's first exhibition in Southern Florida in two decades.

Since the 1960s, Corse's pioneering approach to painting has explored the medium's capacity to utilise and refract light through subtly gestural and precisely geometric works. For the artist, the essence of painting addresses underlying structures of visual experience and their presence within space and time. Corse often emphasizes that her paintings are 'not on the wall,' but instead suspended in a visual relationship between viewer and canvas. Corse has pursued this interest in perception since the late 1960s by incorporating glass microspheres into the surfaces of her paintings, which appear to radiate light from within. The microspheres—an industrial material used to enhance the visibility of road markings—capture and refract light depending on the viewer's position relative to the work's optically rich surface.

Together, the sculpture and paintings on view—created specifically for this exhibition and designed to be experienced in unison—lend deep insight into the artist's practice and ongoing dialogue with perceptual awareness. The works embody rather than merely represent light and invite viewers to experience them in innovative ways. Collectively they open themselves up to their environment and create a transcendental experiential encounter for viewers that is grounded in vision and movement.

This exhibition builds on Corse's presence in the Palm Beach area—the artist is included in the Norton Museum of Art's permanent collection.

Mary Corse (b. 1945, Berkeley, California) has pursued a sustained investigation of abstraction, materiality, and perception through subtly gestural and precisely geometric paintings made over a fifty-year career. Although closely associated with Los Angeles, Corse was first inspired by her childhood love of New York School figures such as Josef Albers, Hans Hofmann, and Willem de Kooning. While studying at the Chouinard Art Institute in the late 1960s, she began experimenting with unconventional media and supports, producing shaped canvases, works with plexiglass, and illuminated boxes. Between 1966 and 1968, her interest in the relationship between light and perception led to her experiments with argon lightboxes powered by Tesla coils. Her work developed in parallel but at a remove from artists associated with the Light and Space movement in Los Angeles, to which she has often been compared. Unlike those artists, Corse's experiments with electric light ultimately led her back to including visible brushstrokes in her paintings, a subjective gesture she had previously removed. During the 1970s and '80s, when she was represented by the legendary dealer Richard Bellamy, Corse traveled often between California and the East Coast. While she continued to maintain a measured distance from the art world, these experiences inflected her perspective on painting, and her work was included in a number of seminal New York exhibitions during those decades. In the 1990s, Corse reintroduced primary colours into her paintings based on her understanding of colour as constitutive of white light.

Corse's work is currently the subject of a three-year-long installation of pieces from Dia's permanent collection at Dia:Beacon, Beacon, New York, and was recently featured in a comprehensive survey exhibition of her six-decade career at Los Angeles County Museum of Art, following a 2018 presentation at the Whitney Museum of American Art, New York. Her work has been included in notable group exhibitions, including Pacific Standard Time: Crosscurrents in L.A. Painting and Sculpture, 1950–1970 at the J. Paul Getty Museum, Los Angeles, which travelled to the MartinGropius-Bau, Berlin; Phenomenal: California Light and Space at the Museum of Contemporary Art, San Diego; and Venice in Venice, an official collateral exhibition of the 54th Venice Biennale.

Corse's works reside in the permanent collections of the Dia Art Foundation, New York; J. Paul Getty Museum, Los Angeles; Solomon R. Guggenheim Museum, New York; Los Angeles County Museum of Art; Menil Collection, Houston; Museum of Contemporary Art, Los Angeles; and Whitney Museum of American Art, New York, among many others. She is a past recipient of the Guggenheim's Theodoron Award, a National Endowment for the Arts Fellowship, and the Cartier Foundation Award. She lives and works in Los Angeles.

Sign up to be among the first to know when new exhibitions by Mary Corse or at Pace Gallery open.