In Ursula K. Le Guin's 1986 essay The Carrier Bag Theory of Fiction, she argues against a masculinist monumentalising impulse of history, and offers up a different proposition for the way culture can exist and can be formed. This 'carrier bag theory' challenges that the first tool was in fact a vessel for gathering, and not an instrument of conquest, and that a male-centric society has conditioned us to negate the former in favor of a broader 'heroic' narrative.

Le Guin takes this further, proposing the heroic narrative within literature (to vanquish, to conquer) is an obsolete form, and suggests that a more complex structure—based on the vessel—should develop instead. This, she posits, would allow for multiple points of view, and engender a more inclusive panoply of voices within the form.

No Patience for Monuments, brings together the work of a dozen artists whose work and practices embrace multiple facets of Le Guin's subversive push against the overarching historical narrative. A group of voices that call to question the history of artistic representation, the process of writing and monumentalising this history, and offering a presage of a new way forward.

Genesis Belanger's work is characterised by a surrogacy of the body, as objects, finely sculpted and tinted in fondant hues that take on human features. Everyday objects are made uncomfortably familiar as they begin to resemble us. For this exhibition, Belanger has crafted an anthropomorphic vase, at once an echo of Le Guin's metaphoric vessel and critique on the objectification of women.

A gouache by Julie Curtiss, shows hair, a feature sexualised and often fetishised in women, that overtakes and becomes the body itself. In Cleave (Vishnu), ropes of hair coil and entwine to form a constricting corset. Menacingly manicured fingernails frame the subject's bust and belly—a 'carrier bag' in its own manner.

Nick Doyle's work—part-painting, part-sculpture—also deals with the gendered nature of objects. A bouquet of flowers, crafted in denim and decorated with metal wire and nails, juxtaposes the delicateness of its floral subject with the rough-cowboy-Americana evocations of its materials. If materials and objects have gendered associations, Doyle demonstrates how the two can all too often be ill-at-ease with each other. The peep holes he has inconspicuously included throughout also seems a timely comment on South Korea's recent legislative measures to crack down on the surge in peeping tom devices installed in female restricted spaces.

Much of the work in the show is engaged with questions of representation, often aiming to subvert the male gaze. Celia Hempton's paintings, for example, focus on male genitalia as a retort to the fixation on female sexual organs on the part of male painters throughout history. In the manner of Gustave Courbet's Origin of the World (1866), Hempton's work is unapologetically genital-driven and she confronts, as a female painter, the taboo of painting a penis. In a reversal of the Courbet painting's famous frontality, Hempton often paints her subjects from behind—a vulnerable position and a rare one for male subjects where art history is concerned.

Jessie Makinson's paintings do away with the tensions between the sexes altogether. Instead, her paintings are often proposals for a feminist utopia devoid of men, and her references range from art history to science fiction. Makinson claims Le Guin's 'speculative fiction,' in which the protagonists explore worlds alien to them, as a major influence. Le Guin was able to reconcile her interest in largely male-written science fiction with her feminist ideals and Makinson's own work is bound up with similar concerns.

Seoul-born GaHee Park's paintings figure prominently in the show. Rendered in a 'naive' style that recalls artists like Henri Rousseau, Park's subject matter is far from it. Depicting romantic scenes where the idyll has turned sour, the sexual acts that seem to be transpiring in her paintings are at odds with their quaint settings. The viewer finds himself an uncomfortable voyeur of Park's ambiguous and troubling scenes. Each painting is a container for simultaneous narratives.

Sarah Peters' bronze heads appear as though they could be ancient artefacts as well as objects from the future. Quoting antiquity with a subversive edge, Peters' sculptures correct the metaphoric beheading of the female form throughout art history. By exploring the site of a woman's voice and agency, her head, and excluding her body altogether, she performs, in a sense, a restitution of female identity.

The paintings of Naudline Pierre also look to art history and tackle female representation through the lens of religious imagery. Her contribution to the exhibition, two works on paper, feature a proliferation of haloed female figures and winged celestial creatures. In her reimaginations of canonical devotional and historical paintings, women assume the poses of the suffering male figures that once dominated those images.

Known for paintings that embed sly social and political commentary in their art historical pastiches and pop-art send ups, Emily Mae Smith's work often employs humour to deliver pointed critiques of patriarchal society. In No Patience for Monuments II—a work where the show's title is derived—a pile of whipped cream is anti- monumental in subject matter and scale, while a disembodied tongue defaces this small, soft monolith.

Jansson Stegner's paintings of athletic subjects bring a monumentalising approach to bear on the female form. Stegner's work contests received notions about the female physique in the tradition of portraiture. Harmonizing beauty and muscularity, and sometimes verging on the grotesque, Stegner challenges a narrow contemporary criteria for female beauty.

Ruby Sky Stiler introduces men in archetypical scenes associated with femininity and maternity. Mining the historical motif of the Madonna and Child, her portraits of men reclining with their children highlight the dearth of tender images of fatherhood. By pointing out such an omission, she releases men and women from the traditional roles perpetuated by such imagery and the subsequent belief systems that produced them.

No Patience for Monuments 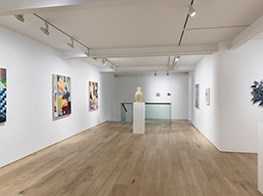 In author Ursula K. Le Guin's 1986 essay, The Carrier Bag Theory of Fiction, Le Guin cites writer and editor Elizabeth Fisher's "carrier bag theory," which posits that the earliest tool was in fact a vessel for gathering and not a weapon—as is favored in male-centric historical narratives—pointing to the biases ingrained in...

Be among the first to know when new artworks and exhibitions at Perrotin are added to Ocula.