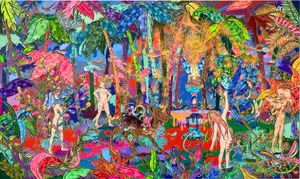 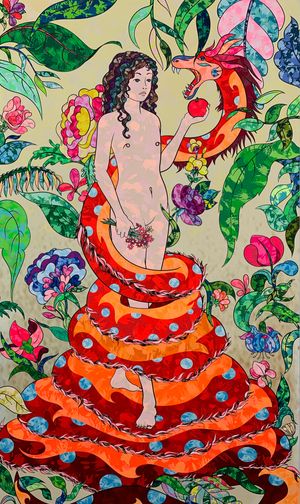 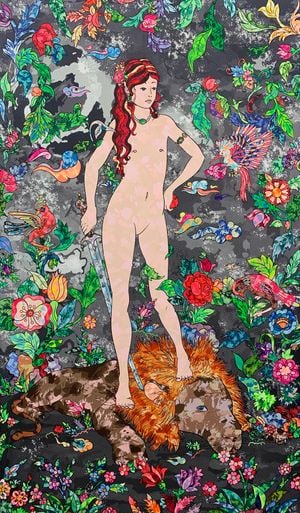 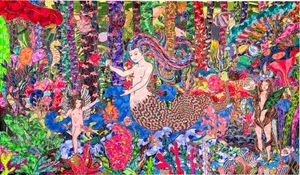 Soraya Sharghi's compositions refer to ancient worlds and historical tales, rewritten and reimagined. Sharghi creates extraordinary and supernatural figures, whose environment is aligned to them. They are set in dream-like nature and harmonize with every animal creature. On the center of the work, bold characters are portrayed as graceful goddesses that rule and guard over their entire surroundings in harmony with flora and fauna. Her figures are powerful. They place women at the forefront of her artworks, portraying and rewriting the narrative of the hero. Depicted groups of people with special relationships are an eminent part of her work. Whether it’s dependency, friendship or suppression, they are all connected in different levels. At first sight, the nudity of the figures conveys defenselessness, an impression that is immediately transformed by gesture, positions and given attributes into elegance and powerful grace. This arrangement allows to reflect on archaic-utopian matriarchy in a contemporary context.

As a historical reference, Sharghi links the poetry and history of the Middle East to contemporary and global fields. Her work connects themes of mythology and poetry with the game of might and power.

Quote: “Art for me is a healing process; it starts with unveiling and ends with layering”

Soraya Sharghi’s work is centered on women and themes of womanhood, connected to mythology of all cultures and religions. With her very personal and ancient universal language, Sharghi creates social as well as political discourses. By challenging cultural and traditional mindsets, the artist takes a strong position on gender-equality and beyond.

The unity of nature and its creatures, in Soraya Sharghi’s artwork, also finds a common link to indigenous rituals and beliefs. The Angel-like, ageless figures are a symbol of what was once given to human beings by nature in its origin and source. The thought of a society, which is in balance with its surroundings, becomes clear. The adolescent femininity is what gives the figures the power to maintain the existing harmony in balance, since opposite sexes are not a necessity in Sharghi’s paintings, and only disturb the maintenance of an entity. Soraya Sharghi’s beings reveal the relevance of physical and spiritual transcendence, narrating the stories of ancient myths in the context of contemporary times.

In her new body of works, nature becomes even a bigger part of the subject. Chaotic happenings found in the paintings are influenced by today’s struggles, as well as the different stages of life, that picture conflicts and desires.

Existing ancient fabrics are rendered and reinvented through her artistic practice. The conception of her technique, being artistically described as ‘Superflat’, may also be inspired by her assistance to Takashi Murakami. She combines her characteristic precise and highly topical painting technique with Khatam, an ancient Persian inlay practice, screen paintings, gold leaves, and meticulous layers on the canvas. Each painting requires a long process, as the artist follows many steps to achieve her characteristic expression. Soraya Sharghi’s artistic aim is to generate new myths and narratives that, although being based on ancient mythology, arise a new conception of female characters and thus, develop awareness about the impact of cultural images.

Sign up to be among the first to know when new exhibitions by Soraya Sharghi or at SETAREH open.