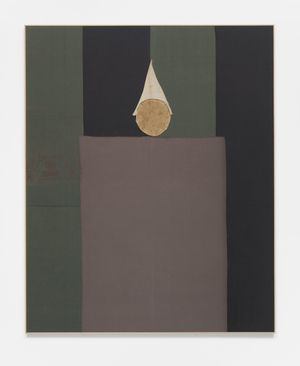 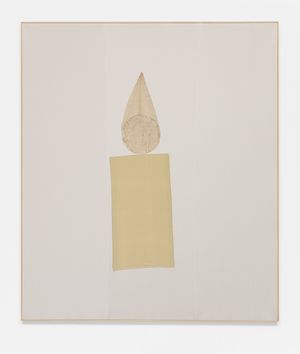 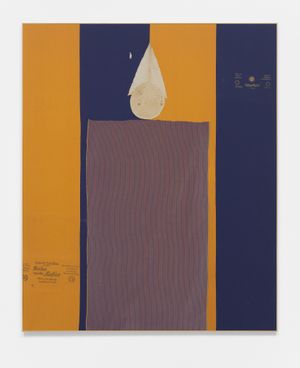 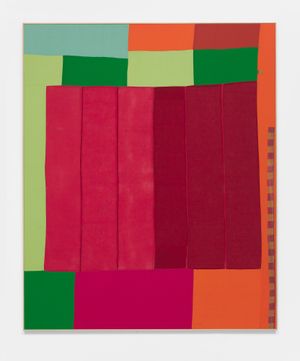 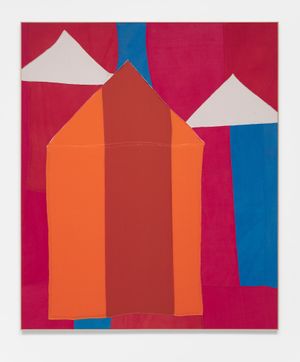 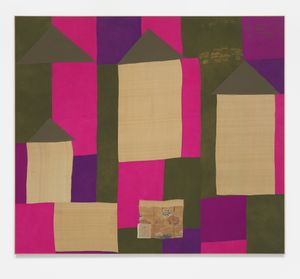 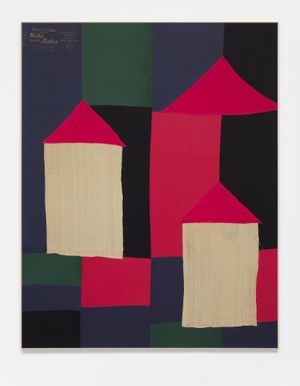 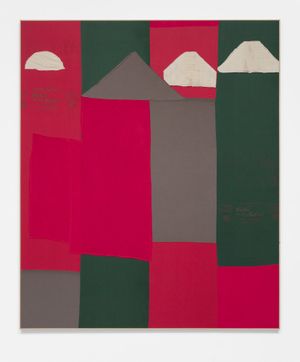 Simchowitz Gallery is pleased to present On the Off Chance, a solo exhibition of work by Lawrence Calver.

This exhibition, the artist's first with the gallery, represents a new direction in Calver's practice. Moving away from the muted and modernist compositions that defined his earlier paintings, the artist here playfully engages with colour and introduces a narrative element to his pieces. Constructed from found fabrics that have been dyed and stitched together, his creations highlight the creative fertility of process rather than the innate nature of a given material.

Calver executed the works featured in the show while looking at a number of artistic traditions. Drawing inspiration from Gee's Bend quilts, Asafo flags, and Soviet visual culture, he has made work that is bold, graphic, and more in service of story than pure formal exploration, focusing primarily on figures and architectural space. Pieces such as Nightlife and Stand Tall announce their subjects, which Calver has rendered in a manner that is simultaneously lush and spare.

The artist's choice of material has always played a large role in his process. Deadstock fabrics, those that are vintage but have never before been used, appear frequently in this body of work. Although manipulated by the artist–dyed, bleached, cut, sewn–they imply a kind of confused temporality. Existing between the old and the new, they allow for a new space that does not adhere to traditional chronologies.

The use of found fabrics extends to the geometries present in the paintings. The circles in Relay come from the tops and bottoms of military duffle bags, while triangular forms are taken from parasols and umbrellas. Calver aims to create art within the bounds of the materials he discovers, finding inspiration in the inherent limitations and expanding into new modes of creation.

Lawrence Calver (b. 1992, Suffolk, UK) centers the experience of searching at the heart of his practice. Whether he is taking a leisurely walk down Portobello Road or intentionally hunting for material, he remains open to the possibility that inspiration may strike in any form. With his educational background in fashion direction, Calver views himself as 'directing' the composition of his artwork and allowing the material to inform his work with accidental gestures. Often using recycled linen, wool and cotton, Calver is careful to allow his fabric's previous life to show through with its textural nuances and history. When material arrives in his studio, he assembles his artworks with the use of bleach, natural clay-dye and stitching. He may submerge a piece of fabric in clay for days or even weeks, allowing time to become a determinant factor in the works' final state.

On the Off Chance

Sign up to be among the first to know when new exhibitions by Lawrence Calver or at Simchowitz open.
Sign Up