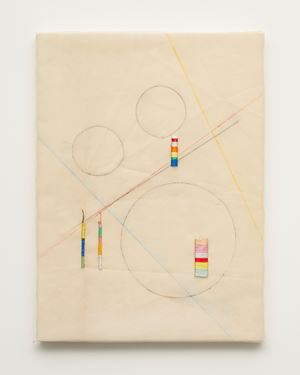 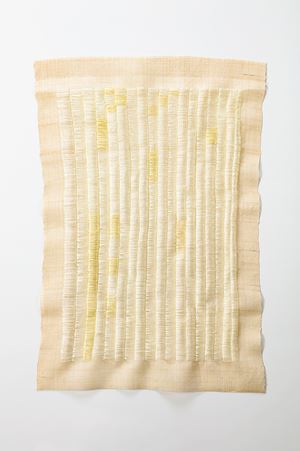 Taka Ishii Gallery is pleased to announce Madeleine. V, Olympic, and my Garden, a solo exhibition from Kei Takemura held from Saturday, October 19 to Friday, November 22. Three years since her last solo exhibition at Taka Ishii Gallery, Takemura will present 11 of her most recent work consisting of embroidery, drawing, and embroidery using a new material—fluorescent silk.

Ahead of the Tokyo Olympics next year, people saying prices would drop after the Olympics was one of the reasons why we were in a hurry to sell our garden.

I was living in Sapporo. It had snowed, and I would walk to kindergarten on the raised white path formed from snow shoveled to the side of the road. Under that mound of snow was my bicycle, which would stay there until spring. I had neglected to put it back in the shed the day before. Even now I still remember the taste of the snow when my father took me skiing and I fell on the bunny slope. The snow crystals that fell into my palm were so beautiful, but would quickly disappear. The snow would get into your eyes if you didn't squint as you looked ahead, so the winter landscape of my memory seems as if veiled by a piece of cloth. When, as an adult, I went to Monte Rosa with friends and skied with a handkerchief over my face to protect me from the strong sunlight, I felt short of breath, and noticed the thinness of the air for the first time; until then I had never skied at such a high altitude.

Sarajevo, where something pink used to fill potholes in the asphalt roads gave the place a strange glamor. When I was 19, travelling with my friend A.S., I collapsed with a fever in Barcelona; I went to Paris at 20, and when I saw the placement of rolled-up fabric to make channels for water in heavy rain, and how the water didn't overflow to the sidewalk, I recalled a room interior visible through a curtain by the window.

This group of works is the visualization of scattered feelings and times. I think that I wanted to fill some kind of void with them and achieve closure on the loss of my garden.

Time Counter (2019), which Takemura set her hand to one year after having come across the material of silk thread, was created during an exhibition at the Museum of Modern Art, Gunma. The work came out of continuously embroidering certain widths to take back time from her life. Having demolished her family home in Tokyo and moved her parents to Takasaki, the artist overlaps Tokyo and Takasaki as well as past and present in this work; she has made memory and time into a work of art by using silk thread died with gingko from the garden of her family home, and fluorescent silk thread that she happened upon in Gunma, her new world.

With Olympic and my Garden 2 (2019), which is also used in the exhibition title, trees from her garden—so strongly associated with memories of her family, and the place she previously lived—are transformed into geometric patterns. Her consideration of issues relating to painting and color makes the work further oscillate back and forth in time. Resonating with design elements from Madeleine Vionnet, who elegantly manipulated anything from the bias cut (inspired by the construction of Japanese kimono) to ancient Greek style, the work leads the viewer to a certain place connected to the silk threads, no longer available. Like the little madeleine that revives vivid childhood memories in Proust's novel, each drawn and embroidered shape, imbued with memories of time and color, gently stirs memories of the Olympic Village where Takemura spent her childhood.

Please do take this opportunity to come and see a collection of work produced by an artist who has been continually searching for a 'global common language' in an attempt to reconnect to the world, as well as the landscapes she has created in which the past, present, and future intersect.

Madeleine. V, Olympic, and my Garden

Sign up to be among the first to know when new exhibitions by Kei Takemura or at Taka Ishii Gallery open.