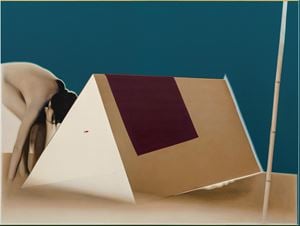 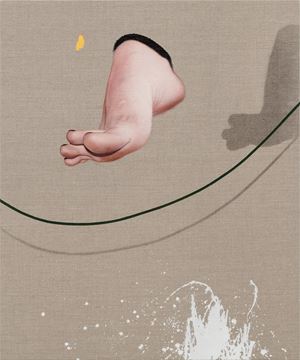 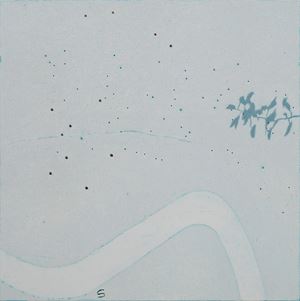 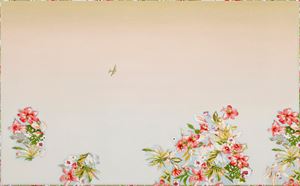 TKG+ Projects is pleased to present Chi Chien's solo exhibition Landing Place as a response to the disruption brought by the COVID-19 pandemic. For the solo show, Chi adopts the role of an artist-curator, and builds on themes central to his practice since 2014, by expanding the interplay between objects, paintings, and spatial installations. The exhibition aims to reveal our social participation in — and often unconscious subjugation to — various superimposed value systems which are constructed by the practice of boundary setting.

Intrigued by the ambiguity and possibility in the acts of boundary shaping, Chi proactively experiments with measures that push the boundaries of demarcation in his practice. For Landing Place, he references a proposition made by English theoretical physicist Stephen Hawking, where Hawking inquires: Does the curved fish bowl distort the view of reality for the goldfish? How do we know we are in possession of an undistorted reality? Are humans also perceiving the world through a curved lens, as if residing in a giant fish tank? While the picture of reality for the goldfish understandably varies from our version of reality, how can we be certain that their perception of reality is less true, if at all?

To Chi, reality resides most likely in the boundary one holds true and believes to be valid. The reflexive debates that are involved in the confirmation and negation of boundaries become the ultimate exercise of boundary drawing. Landing Place represents this conceptual pendulum that swings back and forth between the poles of inside/outside, functional/dysfunctional, disciplined/chaotic, providing an alternative view by posing the question of 'where to land' and 'what position to take.'

In the face of such unattainable truth, Chi proposes a thesis through his solo exhibition: One can only rely on the 'measured value' collectively constructed by society to establish a working perception of cognitive boundaries. These subjective demarcations are further applied and expanded into a social framework of value system that encompasses these collective understanding of measured value. To better capture such social frameworks, Chi curates objects, paintings, and legal documents into a social theater of everyday life. The presentation offers an alternative perspective to the socially-constructed reality, through a reimagination of what defines the boundary of a perceived territory.

The exhibition begins with a mini-wall built from toy bricks. Dysfunctional and ludicrous, the wall and a flag instantiate a declaration of territory in jest. The humorous gesture speaks to Chi's fluid view of the rigidity of traditional disciplines. Yellow Line (2020) functions as traffic signs marking off gallery space into 'exhibition area vis-à-vis non-exhibition area,' and forces the viewer to comply with the arbitrary 'traffic rule' of visitor flow set by the artist. Landlord (2020) is a metaphor of the capitalist society, while Here (2020) develops a calculus where it converts the public land value of the gallery venue into corresponding monetary figures for the artworks to be priced. This body of works mirrors the ways the world operates, and accentuates the power structure that underpins geopolitics and relative valuation.

The background colour of the oil painting Grand Aquarium: Tabernacle (2020) corresponds to the navy blue of the wall. The arrangement, alongside other references of Hawking's 'fish bowl' allegory of distorted reality including the presence of gilded rocks and goldfish, formulates a spatial installation that complicates the perspective of the viewer with intertextual territoriality, and blurs the visual boundaries of where the painting stops and where the installation begins. The freestanding barrier of the work Background (2020) evokes the display environment of a museum. Building on the power relation made possible by the constructed social reality, such visual cues identify a central question of the art world: What are the defining factors behind the authority in art? Does the authority reside in what lies within the boundary, or in the boundary itself?

Sign up to be among the first to know when new exhibitions by Chi Chien or at TKG+ Projects open.