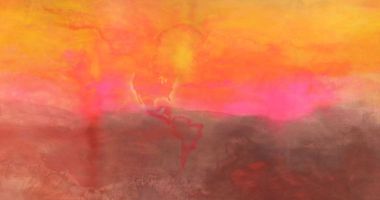 Spanning the art scenes of both New York and London, Frank Bowling's five-decade career traversing American abstraction and classical British landscape traditions has earned him the title as one of the greatest British artists of his generation.

Born in 1934 in Guyuna, South America, Bowling moved to London in 1953 aged 19. Studying alongside David Hockney, Derek Boshier, and Patrick Caulfield at the Royal College of Art, Bowling graduated in 1962 with a silver medal for painting.

Graduating at the height of the British Pop art movement, Bowling's early work demonstrated a heightened social and political engagement. These included figurative works drawn from from family images and magazines, such as Mirror (1964–6) and Untitled (Mother's House) (1966).

On moving to New York in 1966, Bowling immersed himself in the Post-war American art scene, meeting the likes of Jasper Johns, Jack Whitten, and Al Loving. This period marked a shift in Bowling's practice away from the figurative towards abstraction, culminating in one of his most important series of work, 'Map Paintings' (1967–1971).

Informed by the Abstract Expressionists he was encountering in New York, this series saw Bowling experiment with the properties of his materials. Pouring, spraying, and staining acrylic paint onto stencilled maps of South America, Africa, and Australia, Bowling staged an act of defiance against the culturally inherent Eurocentrism of the time.

During this time, Bowling also worked as contributing editor at Arts Magazine (1969–1972), using the platform to speak of the importance of Abstract art at a time where there was a feeling amongst Black artists to contribute to the postcolonial discussion by creating political works.

Between 2017 and 2018, a selection Bowling's 'Map Paintings' was included in the exhibition Mappa Mundi, curated by Okwui Enwezor, which travelled from Haus der Kunst, Munich (2017) to Irish Museum of Modern Art, Dublin and Sharjah Art Foundation, Sharjah (2018). It included works such as Middle Passage (1970) and Polish Rebecca (1971).

In response to the discussions surrounding formalism in art at the time, Bowling began his series of 'Poured Paintings' in 1973. The series includes The Stork's Monotone (1974) and Caesar's Plume (1975), and exemplifies his lifelong exploration into the process of painting: specifically, the tension between the structured application of paint and the element of chance.

By the 1980s, Bowling was back in London 'honing his now-iconic language of process-based abstraction, often working with raw, unprimed canvas laid out on the floor, incorporating a myriad of found objects directly into his paintings', as explained by Ocula Advisory.

Following a survey of his work at London's Tate Britain in 2019, a major exhibition of Frank Bowling's work is on show at Hauser & Wirth. Entitled Frank Bowling London / New York, the exhibition is being held in both New York (5 May–30 July 2021) and London (21 May–31 July 2021).

Bowling has been the recipient of numerous awards, including the Guggenheim Fellowship in 1967; the Grand Prize for Contemporary Arts for his painting Big Bird (1964) at the First World Festival of Negro Arts, Dakar, in 1965; and an OBE for his services to art in 2008. Bowling was elected as an honorary member of London's Royal Academy in 2005, and awarded a knighthood in the Queen's Birthday Honours in 2020.

Between 2017 and 2019, two of Bowling's map paintings were included in the groundbreaking group show Soul of a Nation: Art in the Age of Black Power, which travelled from Tate Modern, London (2017), to Brooklyn Museum, New York (2018); The Broad, Los Angeles (2019); and Fine Arts Museums of San Francisco (2019). Other notable group exhibitions include Epic Abstraction: Pollock to Herrera, The Metropolitan Museum of Art, New York (2018–2020); Mapping Black Identities, Minneapolis Institute of Art (2019); and Postwar: Art between the Pacific and Atlantic, 1945–65, Haus der Kunst, Munich (2016).

Hidden for 42 years in an attic outside of London, this uncovered work by Frank Bowling is now showing at Hauser & Wirth.

Be among the first to know when new artworks and exhibitions by Frank Bowling are added to Ocula.
Sign UpLogin