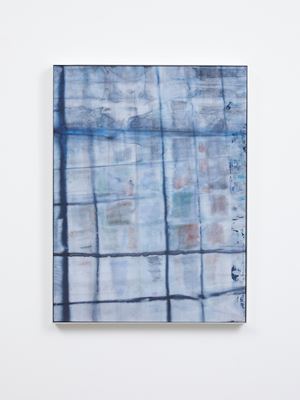 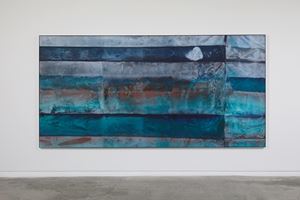 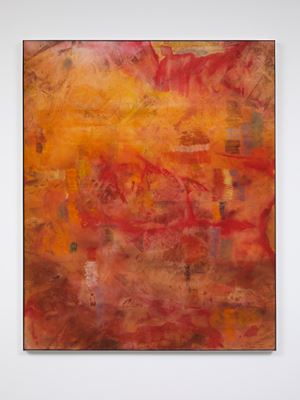 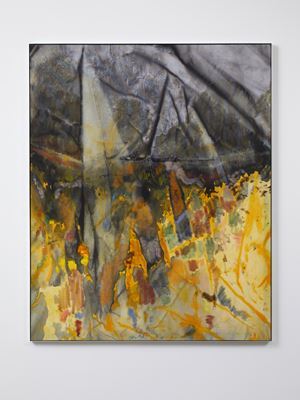 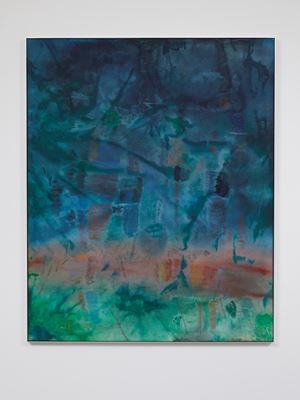 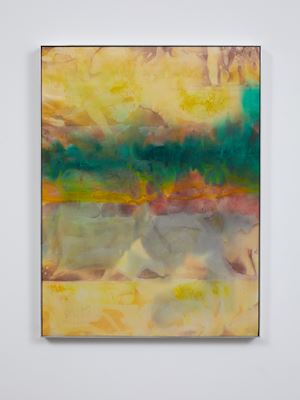 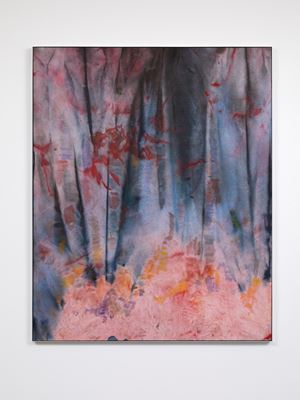 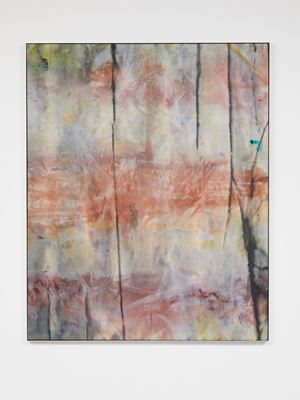 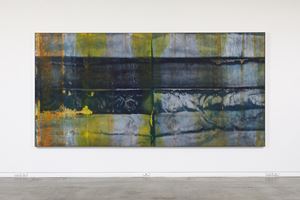 When I first saw Matt Arbuckle's new paintings, I was instantly reminded of sun faded curtains, well-worn clothing, aged newspapers, watermarked photographs, rusted cars and corroded tin roofs - remnants of life marked by the elements. These impressions of 'life' get to the crux of Arbuckle's motivations in creating these works. When speaking with the artist in his studio he revealed a desire to achieve a sense of real movement and depth in his paintings, concerns which have origins in twentieth-century modernist art movements.

Arbuckle pointed me towards the Supports/Surfaces artists, a group working in France from the mid-1960s to mid-70s. These artists were interested in deconstructing the essential elements of a painting - the support (stretcher) and surface (canvas) - and experimenting with pushing the limits of the painting medium. Supports/Surfaces artists rejected the paintbrush, and instead applied colour to their fabric through staining, bleaching, imprinting, dying and burning. Interested in traditionally domestic or industrial techniques, they were motivated primarily by process over outcome.1

Across the Atlantic, artists in America had also been experimenting with similar processes. Helen Frankenthaler is considered a pioneer of the soak-stain technique, which she developed in the early 1950s, involving laying raw unprimed canvas on the studio floor and pouring thinned paint onto the canvas from all sides.2 Morris Louis is known for his 'veil paintings' (1953-60), in which he poured diluted pigment onto the canvas, with multiple washes of paint intermingling the colours in vertical lines, creating the effect of moving curtains, or veils.3

In the late 1960s, Sam Gilliam started creating 'drape paintings', which consisted of stained fabric or paper that were displayed unstretched, and hung or suspended in draped formations, supposedly inspired by laundry hanging on clotheslines.4

Pursuing his own fascination with drapery, in recent years Arbuckle has transitioned from the more traditional painting process of oil on linen to painting on voile (the French word for 'veil'), a semi-sheer lightweight polyester fabric. The nature of the material is such that pigment easily permeates the weave and gives a translucent impression. To create these new works, Arbuckle took the painting off the wall and placed it on the studio floor. Sheets of voile were placed down atop sheets of cardboard and the fabric wetted. Working from above, the colour - a mixture of acrylic paint thinned to the consistency of a dye - was applied using squirty bottles and pushed through the fabric using the artist's hands. This new process stemmed from Arbuckle's desire for the paint to penetrate the weave, to be integrated into the surface of the painting, rather than sitting atop it.Unknowingly, and quite organically, Arbuckle began exploring processes of pleating, folding and binding that are akin to shibori, a technique of 'resist dying', popularised in Japan. Instead of treating fabric as a purely two-dimensional surface to be decorated onto, shibori utilises and accentuates the potential for a piece of fabric to have three-dimensional form by folding, crumpling, stitching, plaiting, or plucking and twisting. This understanding is key to Arbuckle's recent paintings.

The fabric, manipulated in various configurations between layers of applying pigment, has absorbed markings from the process and revealed a topographical landscape: crevices and valleys where the colour ran, pooled and bled; channels and roads from the folds, creases and pleats; and the rough texture of corrugated cardboard imprinted onto the surface. Over a series of painting sessions (usually between one and six), the paint was allowed to dry and the voile unfolded and refolded to create new patterning. In some experiments the voile was drapedover structures, constructed using found materials, to create different types of marks on the surface. The result is an incredible impression of visual depth and movement, despite the physical flatness of the painting's surface.

Norwegian painter Edvard Munch coined the term 'hestekur' (roughly translated to 'horse cure') to describe his habit of deliberately manhandling his paintings and leaving them outside in the elements to see how they would fare. This practice aimed to challenge the notion of an artwork's preciousness. In a similar way, Arbuckle has tested the robustness of the paintings. There is a grimy quality to the surface of the paintings, with sediment and matter congealed on the surface. Like skin, the paintings absorb their environment and journey, from first to last marking, creating a complete narrative. Only in some of these works has Arbuckle applied, as a final gesture, an oil stick crayon to the surface of the paintings: a hint of the artist's hand at play in its composition.

It is not surprising to me that Arbuckle cites an underlying interest in the formal elements of the landscape - its horizons and intersections - as a consideration in his painting. Recurring in these paintings is a tartan-like gridded structure. Horizontal and vertical lines run though the works, intersecting to divide the composition into sections. The grid is an important feature of painting: it comes from the structure of the painting, its stretcher bar frame and supports.

In his new body of works, Arbuckle has deconstructed painting, roughed it up then put it back together again, stretched over supports, framed in aluminium and hung it on the wall. These are indeed process-driven paintings. The artist has expressed his renewed enjoyment in the painting process itself, and it shows in the loose, playful markings. A focus on process does not, in this case, detract from a successful outcome. In making these works, the artist asked himself, what makes an abstract painting pleasing? Is it an attraction to the colour? A sense of movement? Evidence of the artist's hand? In these paintings, I propose that he has succeeded in all accounts.

Sign up to be among the first to know when new exhibitions by Matt Arbuckle or at Two Rooms open.