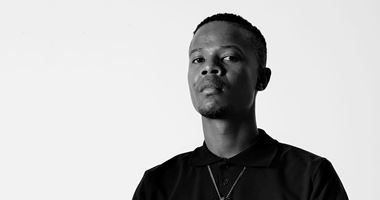 Samson's upbringing in the Eastern Cape village of Ethembeni played a formative influence on his art. In an Ocula Conversation with writer Jareh Das, Samson explains how he 'grew up witnessing rituals and cultural codes that some might view as dark,' but which are part of the spirituality of where he is from that he now seeks to represent.

Beginning his art education in an informal manner, in 2006 Samson happened to wander into Isibane Creative Arts: an artist studio in Cape Town run by Luthando Laphuwano, Xolile Mtakatya, and Gerald Tabata. For the next three years, Samson received artistic training by working under their wing. In 2008, this was followed by studies at the Stellenbosch Academy of Design and Photography.

First experimenting with sculpture in various mediums, Samson quickly settled on oil painting. Many of his early works portrayed flowers inspired, perhaps, by the hedge of cannas planted by his mother along the fence of their house when he was young.

Today Samson's main body of works take the form of portraits in which a plethora of references are conjured up. In works such as Ivory IV and V (both 2018), a black male figure, dressed in a patterned and white silk jacket stands before an eerie, mystical rocky seascape. Each figure's eyes have been painted without pupils, denying the viewer a comprehensible gaze. The heroic pose of each figure and textile richness of their adornments bestows some of the authority and autonomy that are seen in paintings of the Northern Renaissance, while the otherworldliness of the surrounding landscapes evoke a sense of spirituality. Both figures appear to emerge from the water, recalling the mythical water spirit, Mami Wata (mother water). Items of luxury and fashion reappear in Samson's portraits as objects of pride and desire, such as the red converse trainers slung over the left shoulder of the figure in Ivory IV.

Rather than focus on identity politics, Samson has reiterated that his work explores identity from a personal perspective. As the artist explained in his Ocula Conversation, 'I am a young black African man who is painting himself.' Departing from his own image, Samson manipulates his paintings to represent 'plurality through popular signs drawn from dress codes such as gold chains, Nike and Converse trainers,' through which he celebrates the beauty of youth and what it means to be a young African man today.

Samson's process typically involves sketches followed by photoshoots, with the artist completing the final oil painting relatively faithfully from the photographs—a recent development from his earlier practice, which involved using himself as a model. As his practice has grown, Samson has in some cases initiated photoshoots with many models, as seen in Inyongo 3 (2019).

With his first solo exhibition in 2011, titled Rusting Iron and held at AVA Gallery in Cape Town, Samson has quickly risen to international attention. The artist has participated in several exhibitions, artist residencies, and workshops outside of Cape Town, including the collaborative Popty bach programme in the small Welsh village of Llanfihangel-ar-arth. In 2017 Samson was a recipient of the Tollman Award for the Visual Arts and featured in the Armoury show the following year. In 2020, Samson's solo show, Amadoda Akafani, Afana Ngeentshebe Zodwav (men are different, though they look alike) at Perrotin in New York marked the artist's first solo exhibition with a gallery in the United States, but also his first outside of Cape Town.

Be among the first to know when new artworks and exhibitions by Cinga Samson are added to Ocula.
Sign Up Login