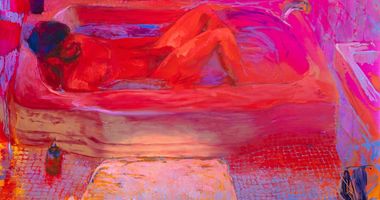 Doron Langberg is a New York-based Israeli-American contemporary artist who paints gestural and figurative images of intimacy from a queer perspective.

Langberg studied at the Yale University Summer School of Music and Art, and Pennsylvania Academy of the Fine Arts. He graduated with a BFA from the University of Pennsylvania in 2010, and with an MFA from Yale University in 2012. Painters such as Lucian Freud and Avigdor Arikha had an early influence in Langberg's artistic trajectory. His interests also extend to key European painters such as Henri Matisse and Vincent van Gogh, as well as British artist David Hockney.

In Doron Langberg's paintings, these artists' influence reveals itself in the way the artist's presence is felt on each canvas, as well as the interiority of each painting's subjects. Their influence can also be seen in Langberg's employment of luminous colours that unify skin and environment, and convey atmosphere and emotion. Such elements are the backdrop for Langberg's exploration of queer intimacy.

There are two core strains to the intimacy one finds in Doron Langberg's paintings. In paintings such as Drawing Mike (2020), Sarah and Lea (2019), and Dad (2016), Langberg captures figures, together or alone, in quiet scenes of repose. The warm palette and hazy forms enhance the sense of intimacy between the figures in the painting, and between the paintings' subjects and the artist. Doron Langberg's husband, family, and friends are portrayed with deep affection in such works.

By contrast, paintings such as those in the 'Zach and Craig' series (2019) and what Langberg refers to as his 'dick portraits' offer a more explicit expression of intimacy: overt sexual depictions accentuated with striking fleshy tones. While differing in content these two arms of Langberg's practice have a common aspiration towards offering a nuanced understanding of the everyday joys of queer love.

In Doron Langberg's interview with Jennifer Samet for Hyperallergic in 2019, he explains that his work as a whole is 'about claiming the full humanity that other artists are assumed to have.' The combination of sexualised and mundane imagery normalises queer sexuality in art in the same way that heterosexual representation is normal in Western art and society as a matter of course.

The artist's masterful technique has forged his position within the new generation of figurative painters.⁠

The possibility of a queer visuality unfettered by ideas of representation is at the forefront of Doron Langberg's debut exhibition, Likeness, at Yossi Milo Gallery. The Israeli-born artist's large-sc

Be among the first to know when new artworks and exhibitions by Doron Langberg are added to Ocula.
Sign UpLogin