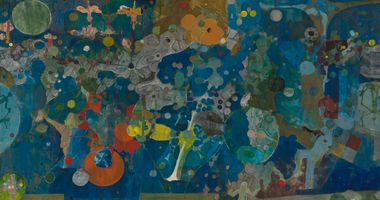 Justin Caguiat is an emerging artist and poet based in New York. His otherworldly paintings, which teeter between abstraction and figuration, anachronistically borrow from a shifting library of European and Japanese painting traditions.

Dazzling and rich in colour, in Caguiat's paintings—like Blue Madonna's Material Cell (2019), The saint is never busy (2019), and All Flesh is Grass, and all its Trust like the Flowers of the Field (2019)—bodies, faces, fruits, and foliage are pressed together and made only faintly distinguishable. Their forms are shrouded amidst a constellation of dots and shapes, challenging the viewer to mentally fill gaps.

Applying colour in dots in this manner hints at a pointillist influence. There are also hints of impressionism in the colour and haziness of form, alongside other elements drawn from European traditions, such as Viennese history painting and the post-impressionist Les Nabis group.

These are combined with characteristics of Japanese history painting, such as two-dimensionality of form and, as demonstrated in an untitled work from 2018, elements of Japanese calligraphy. Combining Japanese and European historical influences, Caguiat's style has been likened to the 19th-century Franco-Japanese hybrid of Japonisme.

More than a painter, Justin Caguiat delves into conceptual and performance art. This was evident in his first solo show, God is a Concept from a Story Come to Life (2018), at 15 Orient in Brooklyn. The centrepiece of the show—surrounded by his tapestry-like oil on linen paintings—was Obliteration of the Past in the Brightness of the Present Kinesthetic Empathy (2018); an assemblage comprised of a figure laid out on a bed of linen, with a Japanese Noh mask for a head and bread for limbs. At the opening of the show, guests could eat the body, partaking in a human narrative cycle of consuming replicas of what we destroy.

Making his presence known on the international art scene, Justin Caguiat's artworks have featured in exhibitions in the United States, Switzerland, Canada, Italy, and England. Recently, he took part in a trio show at Arcadia Missa with painter Hamishi Farah and sculptor Danica Barboza for CONDO London 2020. Caguiat has also published a book of his poems with Codétte, entitled A Rat, a Dog, a Boy (2017).

Constellations of colour spill across planes of unstretched canvas and linen in the paintings of Justin Caguiat.

This painting by Justin Caguiat at Modern Art was among our favourites.

Sign up to be notified when new artworks and exhibitions by Justin Caguiat are added to Ocula.
Sign Up Login