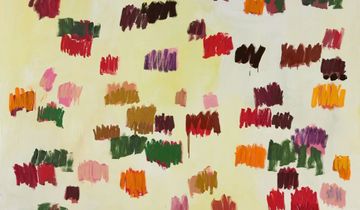 German artist Günther Förg left behind important contributions to the fields of abstract painting, sculpture, photography, and installation. His works are both self-reflective and referential to modernist themes from a range of 20th-century movements.

Born in 1952 in the Bavarian town of Füssen, Günter Förg's artistic career began at the Academy of Fine Art in Munich in 1973. Influenced by artists like Blinky Palermo and Sol LeWitt, Förg began to develop his 'Gitter' paintings during his studies. Initially using only grey and white, these abstract monochrome paintings bucked the figurative trend that came to dominate West German art in the 1980s.

Completing his education in 1979, Günter Förg began developing his wall paintings, which marked a shift towards installation. Their monochrome surfaces evoking the works of Kazimir Malevich or Mark Rothko, Förg's wall paintings became a consistent feature of his career to the end. Frequently made up of horizontal and vertical divisions between contrasting fields of colour, the context and location of the wall upon which the artist worked determined how these works would be painted.

In the 1980s, disillusioned by painting's apparent disjunction from reality, the artist completely redirected his attention to photography. Günther Förg's photographs revolve primarily around examples of modern architecture. Well into the 1990s, he printed large-scale images of subjects like Art Nouveau buildings in Germany, fascist structures in Italy, and Bauhaus architecture in Tel Aviv. Günther Förg's prints were often presented in casing fronted with glass, adding to their architectural dimension.

In the late 1980s, around the time the artist also began to make a return to painting, Günther Förg's sculpture practice also began to take shape. His 'Lead Paintings' (1986–1990)—abstract acrylic paintings on supported lead sheets—were a launching point for his sculpture as he embraced new materials such as wood, concrete, lead, copper, and bronze.

First creating abstract bronze reliefs, formed by hand with a painterly quality, by the 1990s Förg was producing his wood and metal fragmented body parts.

Progressing on from his 'Lead Paintings', Förg's return to painting saw a gradual shift away from an exclusively minimalist style. By the 21st century, his paintings had become brighter in terms of palette and more gestural in conception.

Appropriating and experimenting with older modernist strategies of art-making, Förg's 'Gitterbilder' paintings (1992–2009) evoke the lines of Cy Twombly and colourful abstraction of late Munch works, while other paintings resemble Paul Klee's watercolours and Mark Rothko's colour fields, among others.

Over the last 40 years, Günter Förg's art has appeared in group and solo exhibitions in galleries and institutions across the globe. In 1996, his work earned him the Wolfgang-Hahn-Preis from the Museum Ludwig. Günter Förg features in major public collections worldwide, including the Museum of Modern Art in New York, Kunstmuseum Basel, Luxembourg's Musée d'Art Moderne Grand-Duc Jean, the National Gallery of Canada in Ottawa, Stedelijk Museum Amsterdam, and the Tate in London.

Since Günter Förg's death in 2013, his work continues to command attention on a world stage. A survey show of the artist's broad body of work's, Günther Förg: A Fragile Beauty, opened at the Stedelijk Museum in Amsterdam in 2018, later traveling to the Dallas Museum of Art in Texas. In 2019, Günter Förg's artworks represented German art across the globe, featuring in the travelling institutional survey exhibition, Travelling the World: Art from Germany, which went to museums in Germany, Serbia, Russia, Brazil, Mexico, Israel, and Korea.