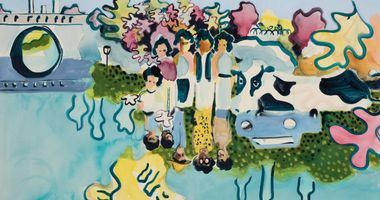 Advisory Perspective In the Studio With Miko Veldkamp Read More

Dutch-Indonesian painter Miko Veldkamp draws from his experiences in Suriname, the Netherlands, and the United States to create poignant paintings and self-portraits that aim to subvert the colonialist gaze.

Using varied brushstrokes to play with shadow and reflections, Veldkamp builds complex narratives that focus on identity, belonging, and the multiplicity of perspectives.

Born in Suriname, Veldkamp moved to the Netherlands, where he received a BFA in video and sculpture from the Willem de Kooning Academy in Rotterdam. He was later a resident at the Rijksakademie van beeldende kunsten in Amsterdam. He has been based in the United States since 2014 and in 2021, graduated from the MFA painting programme at Hunter College, New York.

Miko Veldkamp's work transcends time and place, reflecting his shifting identity and relationship with the Netherlands, United States, Suriname, and the Asian diaspora. Combining elements of his personal life with folklore and ancestral themes, Veldkamp's works range from surreal landscapes to pseudo self-portraits. These dreamscapes are otherworldly, inhabited by forest spirits or floating animals, yet are also reflections of the artist's own psyche and personal traumas.

Veiled self-portraits often appear in Veldkamp's work, in which the artist takes on different roles and identities. His explorations of self link to his family and ancestors in rural Suriname, showcasing his own fluid identity and cross-cultural experiences. He also plays with a range of stereotypes and symbols, which can be interpreted differently across cultures depending on the local perspectives. His references to ghosts in both the subject matter and title of his works, such as Garden Ghost (2021), connect back to Indonesian folklore.

Veldkamp's work is a fragmented mix of memories and observations that convey stories about his life. His experience living in different continents and cultures influences his idea of memory and space. His works become sites for exploration as he navigates otherness in different contexts.

He creates this sense of otherness through his distinct use of perspective. In paintings such as Sunroom (2021), barriers play a significant role, as they divide interior and exterior space, ultimately deciding what is included or excluded in a frame. This approach also emphasises the role environments play in shaping an individual's identity and sense of self.

But as someone who explores personal and family histories across geographical boundaries, Veldkamp questions ideas of belonging when environments and places of home can change. The fogginess he creates with his brush allows figures and landscapes to emerge and recede, showcasing ideas of transformation and impermanence, while his use of familiar spaces like parks, living rooms, and nightclubs give viewers a brief opportunity to relate to the surrounds.

Veldkamp begins by reconstructing physical spaces from his memory through sketches. His sketches act as a script, which he has not fully rehearsed until he gets to the studio. He paints from memory, and this process of remembering and misremembering produces the new worlds he explores. He builds upon the canvas with washes of colour, creating the varying degrees of translucency present in his works. This technique, which is reminiscent of Les Nabis and Expressionism, blends figuration with abstraction.

Spontaneity is also a key element in Veldkamp's work, as he incorporates the mistakes he makes as part of the process. He allows unplanned marks to occur directly on the canvas, interested in the process of reconstructing and reshaping memories and spaces. By working freely, he wants his viewers to feel as if they are seeing something for the first time without any prior judgement.

Veldkamp was nominated for the Van Bommel Van Dam Prize in 2019 and was awarded a Hodder Fellowship from Princeton University in 2015. His work has been featured in ArtMaze (2019) and New American Paintings (2020).

Be among the first to know when new artworks and exhibitions by Miko Veldkamp are added to Ocula.
Sign Up Login