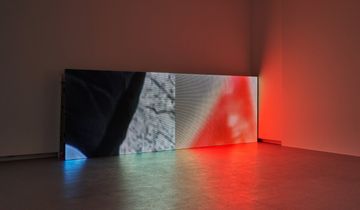 Born in Seoul, Taeyoon Kim spent his formative years living in the United States. He studied Film/Video at California Institute of the Arts, graduating with a BFA in 2000. In 2005, Kim graduated with a BFA in Film/Video/New Media from the School of the Art Institute of Chicago. He returned to Seoul after completing his studies.

Taeyoon Kim works across disciplines, examining digital media and its associated properties such as rhythm, transmission, and physicality. While studying film at university, Kim became interested in exploring alternative possibilities for video that were not bound to narratives, and sought more abstract, agile, or experimental ways of working with the medium. Much of his work explores the malleability of visual communication and the transmission of digital images.

Kim considers the material properties of the video medium, with his works often highlighting elements such as duration, rhythm, chance, and the viewer's experience. He has worked with software engineers, learning computer languages and algorithms to produce videos with novel properties such as infinite durations or randomised playback orders. Images and objects are repeatedly distorted and made ambiguous. By doing so, Kim deconstructs preconceptions around digital media, and destabilises a linear experience of time.

Kim has stated: 'Multiple layers of videos in random loops create coincidental rhythms through time where the rhythm plays with the sense of time. And the coincidences sustain the duration to much longer periods'.

This can be observed in the multimedia installation Steady Griffins (2014), in which a randomised loop of Family Guy animation clips shot by the artist on his iPhone are played across multiple screens. For the three-channel video installation Triple Rhythm (2014), Kim presented seven videos that run on a random loop, playing on screens that rest on plinths of staggered heights. In these instances, the spatial and temporal environments are abstracted through the artist's manipulation of the footage and physical presentation.

For his 2022 solo exhibition Oblique Afternoons at Whistle in Seoul, Kim combined video works with a collection of mundane noises recorded over time, in an exploration of behaviour and synchronisation.

On Oblique Afternoons, Sherry Paik wrote for Ocula Magazine: 'Whether playing on an infinite loop, disrupting synchronicity, or following a rhythm, Taeyoon Kim explores the expansion of time and space through digital media and the moving image'.

Kim often integrates sculptures into his video installations as an extension of his enquiry into perception and motion, or as tangible embodiments of immaterial elements such as sound waves.

The artist's solo exhibition Blinded Coincidence (2016) at ONE AND J. Gallery in Seoul featured series of video works shown alongside monochromatic abstract sculptural forms. Conformist (2016) comprised a large stack of amorphous grass-green clay forms held together by a PVC pipe protruding from the top. CRT televisions were adorned with brightly coloured conical forms made of resin, paper clay, and oil stick—such as Bill (2016) and Sunday Yellow (2016)—rendering a sense of physicality to the artist's exploration of digital media while interrupting the viewer's engagement within a space.

In an interview with MAAP, the artist stated: 'The placement of the screens enables people to physically move their bodies and look around... While viewing my video, people are free to have random thoughts based on the input of multiple channels set to an absent narrative and unlimited duration'.

Read More Ocula Feature Seoul's Must-See Art Exhibitions By Elaine YJ Zheng, Seoul Ocula Magazine reviewed the dozens of exceptional exhibitions planned for September, and provides its recommendation on what to look out for in Seoul's art galleries, institutions and non-profit spaces.