Japanese artist Yayoi Kusama is one of the world's most well-known contemporary artists. The first of Kusama's 'Infinity Nets' appeared in the late 1950s. Often monochromatic, they feature two hues of paint: a usually dark background and a brighter oil paint applied on the surface with a narrow brush. Most feature saturated reds or oranges, densely spread islands of colour peeking through meshes of linked lines.

The lines in this body of work are varied. Sometimes thick, sometimes thin; occasionally wide, sometimes narrow; sometimes curved, other times straight; sometimes dense, other times airy; they are obsessively perpetuated, and based on Kusama's hallucinatory experiences when she attempted to transfer lines she experienced as 'crawling' over her body to surfaces in the wider world.

Yayoi Kusama began to create her iconic 'Infinity Nets' after moving to New York City in 1958, where she settled after leaving Japan. Initially, she focused on islands of red surrounded by rivers of densely applied dark blue, but she also embraced the use of white, grey, and black in these abstract paintings. Through lines of undulating waves, Kusama created fields of swirling energy (with lacework exposing small gaps) or tautly stretched webs. Elegantly shaped rhythms began to emerge in the compositions.

Precursor to 1960 minimalist paintings and more

At the time of their appearance, these nets were distantly related to the 'White Writing' found in the more ethereal linear paintings of East Coast painters Mark Tobey and Morris Graves. When white paint was used for Kusama's net lines, they were seen as precursors to the paintings of 1960s minimalists like Robert Ryman. Involved in New York's art scene, Kusama's unusual process attracted interest from artists such as Frank Stella and Donald Judd, who bought works for $75 each. Kusama's early use of an obsessive methodology can be seen to precede many artists, such as On Kawara and Niele Toroni, and others who incorporated counting into their techniques, such as Roman Opolka, Jonathan Borofsky, and Imants Tillers.

When Kusama arrived in New York, she spoke very little English and was socially withdrawn, so the obsessive net paintings can be thus seen a resistance in the face of American pragmatism, a mystical counter-charge and cathartic therapy to the hallucinations of red flowers covering her body and the walls of her apartment. She had been regularly hallucinating since the age of ten, when she would hear violets talking. In America, in an attempt to control this unstable universe, she began making large numbers of net paintings, fighting the disturbing visions with a fanatical work ethic.

In these paintings, the ratio of the background space to the line thickness varies from work to work. Some parts of the net are more thickly encrusted than others. Each of Kusama's works is an individual rendering, due to the collective nature of the gap 'imperfections.' The polka-dotted effect, combined with varied spacing and textural alignments, create subtle formations within the overall 'pointillist' haze, and the proximity of adjacent shapes generate different optical tensions in the picture plane.

Distinctive, but part of an ongoing continuum of production

This allows each work to be distinctive, yet at the same time part of an ongoing continuum of production. The amount of manual labour involved, and the density of each infinite curtain of marks brings a spiritual dimension to her practice—a window into a cosmic, never-ending void. Incessantly painted, the 'Infinity Net' paintings reflect Kusama's impossible mission to 'capture' the universe, to haul its entangled elements towards her rectangular stretchers and be contained within her encrusted linear marks, inside the hundreds of thousands of variously shaped dark holes they articulate. 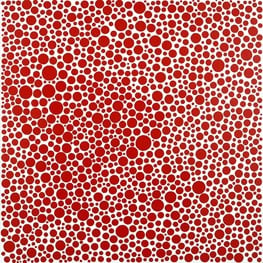