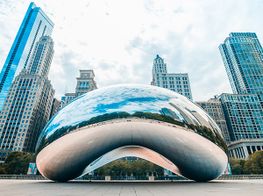 The event will be run by the company behind contemporary art fair Expo Chicago.

An art fair devoted to prints, photography, and art books will debut in Chicago from 23–26 September.

The event will take place at Navy Pier, the same venue as Expo Chicago, but the two events won't rub shoulders. While Expo Chicago previously took place in September, this year's edition was cancelled, and future editions were moved to April.

In January, Tony Karman, President of Art Expositions LLC and the president and director of Expo Chicago, said 'at this time, it's hard to say when is the right time that the fair can happen because things continue to change quickly—or stay the same.'

Four months later, Karman believes he can pull off an in-person fair in the Windy City this September.

'We are confident in this timing given that both Chicago and the State of Illinois restrictions are expected to be lifted in June and July along with the swift vaccination efforts taking place across the United States,' Karman told Ocula Magazine.

Karman said fees for the main sections of the fair would be lower than for Expo Chicago, and there would be several options for tables to support art book dealers and smaller publishers.

Karman said there was no set figure for the number of participants, but he would be collaborating closely with the fair's partners, including a soon-to-be-announced advisory committee, to shape the first edition.

'The tradition of printmaking has long been grounded in the Midwest with strong university-based programmes, many community-based and collaborative workshops, and all the small press and independent publishers which make up the Chicago zine scene,' said IFPDA Executive Director Jenny Gibbs. 'The IFPDA is delighted to be a part of this inaugural celebration of prints and editions in the Midwest.'

The IFPDA's own event, the Fine Art Print Fair, was established in 1991. It takes place in New York City in October. Their spring online edition is live from 14 to 28 May.

'The inclusive and collaborative big tent Editions is raising will provide a special platform for AIPAD galleries to bring the joys of photography to Chicago,' added AIPAD President Michael Lee.

The application deadline for galleries wishing to participate in Editions Chicago is 1 July. —[O]