In a deal worth millions, Bruno Raschle acquired more than 250 works in the California-based collection.

Swiss investment manager Bruno Raschle acquired 'a significant portion' of the Kelton Collection of Australian Indigenous art, according to D'Lan Contemporary, who helped broker the deal.

The purchase includes Papunya boards and canvases from the early 1970s, and paintings by Clifford Possum Tjapaltjarri, Emily Kame Kngwarreye and Lin Onus, among others. It also includes what Raschle describes as 'a wealth of unpublished documents and videos'.

The Australian Financial Review described the Kelton Collection as 'arguably the most important collection of Australian Indigenous art outside a public institution'. They estimated Raschle spent at least AU $10 million to acquire the works.

D'Lan Contemporary's founder D'Lan Davidson said the deal 'comes at a time when we are seeing consistent international growth in demand for contemporary Australian Indigenous Art.'

Davidson told Ocula Magazine that because the works were already held overseas, 'there has been no direct cultural loss to Australia' due to Raschle acquiring the works.

'There can be no singular collection that can help gain recognition globally more than this body of work can,' he added.

The Kelton Collection of Australian Indigenous art was put together by Richard Kelton, whose family amassed a fortune selling real estate. Kelton began the collection in 1979 and kept it in three apartments in Santa Monica, California. He passed away in 2019.

'We are extremely happy to see this key portion of our father's legacy in the hands of Bruno Raschle,' the Kelton family said in a statement. 'His enthusiasm to curate and care for these works and his love and respect for the Australian Indigenous culture make him an ideal custodian of these works going forward.' —[O] 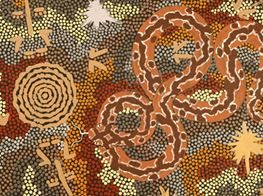 Tjapaltjarri painted acrylic dot paintings now some of the most identified with the modern Aboriginal art movement; inspired by Aboriginal mythology known as the Dreaming, or Dreamtime. Tjapaltjarri worked as a cattle stockman from the age of 12, 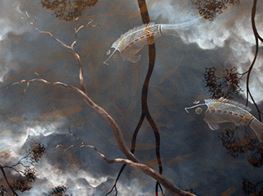 Lin Onus was a pioneer of contemporary Aboriginal art, representing a generation of artists whose work captured the urban experience of indigenous people through a distinctly Australian iconography. As an activist for indigenous rights, Onus’

The winner of the $30,000 opportunity was chosen from eight finalists.

The artist recreated scenes that played out during Australia's catastrophic bushfires last summer.