Liliana Porter’s Theatre of the Absurd 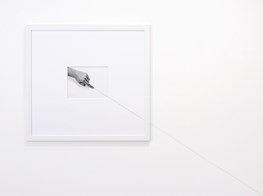 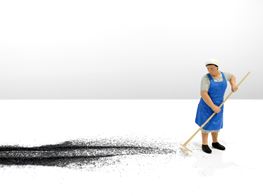 Liliana Porter delights in dissonance, which she stages in assemblages that place a host of recognisable characters in unlikely companionship, from rubber ducks and plastic soldiers to porcelain figures of Chairman Mao and Elvis Presley. In some scenes, minuscule figures perform colossal tasks: painting a human-sized chair, for instance, or an entire gallery wall.

These 'theatrical vignettes' are the result Porter's long-term concern with subverting genres of representation, pinned to an early career in printmaking and photography: a spectrum that will come together between 9 November and 21 December 2019, when a cast of Porter's characters will be busying about the Krakow Witkin Gallery in Boston alongside a set of historic photos by the artist from the 1970s that play with scale and perception through water. The central piece in the show will be Forced Labor (black sand) (2019), in which a tiny figure rakes up a 16-foot-long pile of black 'dirt' on a long plinth.

The combination of works in Porter's upcoming show speak to the formative decades in the artist's practice. Born in Argentina in 1941, Porter studied in Buenos Aires and Mexico City before settling in New York in the mid-1960s, where she co-founded the New York Graphic Workshop with Luis Camnitzer and José Guillermo Castillo. Throughout these early years, key ideas were distilled into emphatic images such as Wrinkle (1968), in which ten photo-etchings depict a sheet of paper transitioning into a crumpled ball—'a metaphor of time and the contradiction of an apparently inconsequential and banal action . . . becoming a poetic situation', explains the artist in one interview. The manipulation of time continued with Mail Exhibitions (1969), which saw Porter send offset prints of shadows of objects, including a glass and olives, by post, inviting the receiver to put the physical object next to its printed shadow to complete the work.

Following the dissolution of the New York Graphic Workshop in 1970, Porter continued to play with the limits of representation through photography and printmaking. Untitled (1973), which was exhibited at her 2009 retrospective at Tamayo Museum in Mexico City, connects a series of nails on the floor to photo-engraved nails on the wall with string. The Line (1973) depicts a line drawn along the artist's index finger that continues on the paper's surface. In the 1980s, she started the 'Forced Labor' series, in which miniature figurines engage in futile acts of clearing and constructing calamitous piles and tangles of materials like sand and thread. In Forced Labor (blue sand) II (2008), a man equipped with yellow rain boots transports a pinch of blue sand in a miniature wheelbarrow away from a vast pile behind him.

In the 1990s, photographs of ceramic and plastic figurines collected in antique shops and flea markets from around the world signalled a new approach to collapsing time and order, whereby cultures and eras are placed together. Increasingly, small figures and other objects made their way into assemblages and installations that used photography as a starting point. Them with Christ (1997), involves a golden cibachrome print of the bust of Christ foregrounded by a series of disparate figurines on a ledge that has been attached to the print.

Such enigmatic installations are acts of wilful duping—they imply narrative but never offer a full picture, challenging viewers to make their own connections and confront their own frames of reference as associations and histories collide. In Them with Nazi (2011), for example, a figurine of the Chinese Mao-era ballet The Red Detachment of Women is foregrounded by a dancing married couple, Elvis Presley, Mickey Mouse, and most prominently, the bust of a Nazi officer: all spectres that haunt the present through their enduring fictions and non-fictions.

Porter succeeds at creating an illusory space rooted in reality in these miniature worlds—an experience she has described as being similar to 'watching a movie with the lights on'. For her expansive installation at the 57th Venice Biennale, Man with an Axe and Other Brief Situations (2017), a small figure with an axe is positioned in a path of his own destruction. Crushed and cracked objects and figures—including chairman Mao in pieces—are interspersed with other small figurines shown sitting or standing among the debris.

'The man with the axe could be, among other possibilities, a metaphor for the passage of time,' Porter has explained. While time might seem linear as an experience of everyday tasks, or as a narrative composed into historical record, it is also an explosive and destructive unravelling that is beyond comprehension and control. —[O]