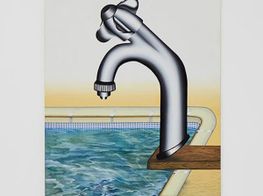 There is something about the disquieting integration of the natural and mechanical in Roberta Booth's paintings that makes them feel strikingly contemporary, despite in some cases being painted nearly 50 years ago.

In her canvases from the early 1970s to early 80s, we see a variety of seemingly mundane objects—pruning shears, a cheese grater, a typewriter, or even simply a door frame or window latch, for instance—reconfigured into uncanny semi-human or avian forms.

Deeply rooted in psychological theory, her paintings are simultaneously threatening and yet utterly enchanting. Indeed, it was this decade-or-so of work that was the subject of a recent solo exhibition Roberta Booth: Paintings 1972 – 1982 at Castor in South East London, the first comprehensive solo display of her work since her death in 2014.

The suite of paintings in the exhibition all seem to reference the dawn of technological innovation in the artist's own lifetime and appear to puzzle over the value or the danger of creating ever-more sophisticated objects to satisfy human demands.

The defining stylistic features of such works are the sharply rendered, shimmering metallic surfaces of the objects she depicts, rendered precisely with her graphic use of oil on canvas, set against anonymous backdrops, which range from simple bands of colour to more meticulous but vacant landscapes or domestic interiors.

Born in 1947 in Derby, England, Booth studied painting and printmaking throughout the mid 1960s and into the early 70s. She received her postgraduate degree in 1972 from the Royal College of Art in London, after which she committed much of her career from the late 1970s onwards to education, taking a teaching position at Cambridge School of Art at Anglia Ruskin University for over 30 years.

In this time, however, she did exhibit widely across the U.K. primarily, appearing in a number of museum group exhibitions and between 1996–2008, Booth had six solo shows with her Kensington dealer, Duncan Campbell Fine Art.

Over the years, her works were also acquired for significant public collections by institutions such as Kettle's Yard and the New Hall Art Collection in Cambridge, the V&A, London and the collection of the University of California, Los Angeles.

Several decades on from its creation in 2021, her rather dystopian body of work still feels timely, with its prescient foreboding and flare for the surreal being quite in vogue in contemporary painting.

Though Booth's fusion of the human and mechanical might not have been an entirely unique concept in the 1970s and 80s, nor is it now, her illustrative style of painting, somewhat lurid palette and slightly unsettling compositions would not be out of place today alongside works by the likes of Emily Mae Smith, Julie Curtiss, or Jana Euler.

By comparison, the technological anxiety that pervades Booth's paintings now takes on a slightly nostalgic appearance, which, coupled with their more modest price point, only adds to their charm. —[O]

In 2021, we saw demand for the work of self-taught Brooklyn-based painter Eddie Martinez skyrocket.⁠⁠

The artist's exhibition at Pace Gallery's Palm Beach space is his first since joining the gallery in April 2021. ⁠⁠