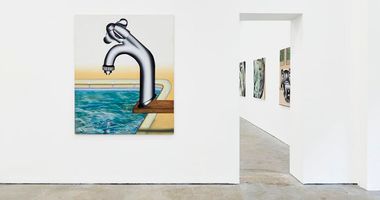 Booth was born in Derby, England. She studied painting throughout the 1960s and early 1970s, first at Luton School of Art (1964–66), then at Coventry College of Art (1966–69). She obtained a Master's degree in printmaking at the Royal College of Art (1969–72). During her education, the artist was taught by leading figures Barbara Reise and Michael Sandle. Booth would go on to also become a teacher, lecturing at both Barnfield College and Harrow School of Art, as well as being a senior lecturer for over 30 years in the Cambridge School of Art at Anglia Ruskin University (1973–2007).

Booth travelled widely from her modest studio in Ashwell, Hertfordshire, exploring philosophies from the practices of Buddhism, Hinduism and Sufi mysticism. These philosophies would greatly influence her later paintings.

In her paintings from the 1970s and 1980s, shimmering gradients representing luminous metallic surfaces cut into natural environments. A propeller churns the water in By Still Waters (1982); dangerously sharp shears sing to a sunny field in The Dawn Chorus (1976); the inside of a washing machine is invaded by grass in Automatic (1982). These works demonstrate both a poetic marvelling, and an apprehension, about the intimacies of everyday life. The natural and the man-made collide uncomfortably, with neither able to assert its dominance.

An anthropomorphised procession of ploughshares in Booth's large Earthworks 2 (1984) illuminates the threat of mechanisation, while simultaneously reminding us how technology is created in our own image. As Will Hine suggests, Booth's paintings from this period 'appear to puzzle over the value or the danger of creating ever-more sophisticated objects to satisfy human demands'.

Echoes of Booth's earlier approach, such as her crisp rendering and graphic use of colour, appear in works after the 1980s. However, the scope and vision of her compositions expanded, opening up into sublime vistas. These oil and acrylic paintings are generous in their complexity. In these works, Booth portrayed fractured worlds of pattern, colour, texture and form, arranged in a shallow pictorial field as if on a platter presented for the viewer's consumption.

Landscapes sublimate into real locations, as in Marrakesh (1998), where architecture sketched during Booth's visit to Marrakesh is collated with abstract patterns, a camera, snakes, a trumpet. In that same Garden (1999), presents four panels of vibrantly-coloured forms blooming into a shifting landscape of gardens and deserts. Here, Booth communicates the feeling of specific places without didactic representation. Taoist symbols and letters skirt the third canvas, revealing her reverence for mystical knowledge.

Roberta Booth's work is held in collections around the world, including the Victoria and Albert Museum, London; the University of California, USA; University of Waikato, New Zealand; Oxford University, England; the New Hall Art Collection, University of Cambridge, England; and The Royal College of Art, London.

Be among the first to know when new artworks and exhibitions by Roberta Booth are added to Ocula.
Sign Up Login