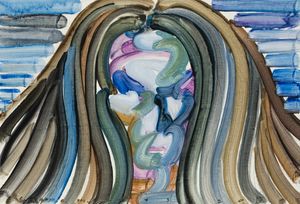 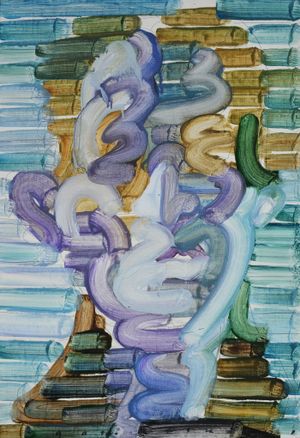 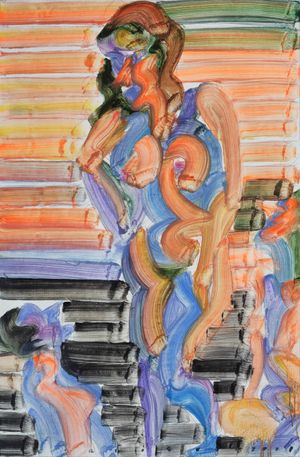 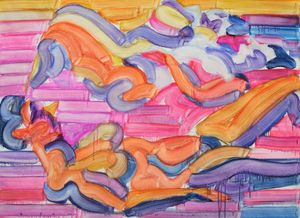 A2Z Art Gallery is proud and honored to present Social distancing, the first solo exhibition of Egami Etsu in Paris.

After studied at the Central Academy of Fine Arts in Beijing (CAFA) and the University of Art and Design in Karlsruhe (HfG), the Japanese artist Egami Etsu focused on the observation of our society and observed that 'humans communicate with each other is not helping them to get closer, but rather creating more distance'. Since the dawn of time, and particularly in the COVID-19 crisis, communication has become more complex in view of the diversity of human exchanges. Between virtuality and reality, the feeling of social distancing and uncertainty have emerged on both sides of the globe.

Having grown up in different cultures and languages, Egami Etsu is exploring the barriers of communication, from its essence to the process, which she calls the 'game of misunderstandings'. As Julie Champion, the curator at the Centre Pompidou, mentioned that the beauty of her work is that she sees all these specificities as a source, not only of misunderstandings, but also of creation and richness in people's relationships.

Oscillating between abstraction and figuration, Egami Etsu landscape portraits paintings constructed with horizontal, vertical and sinuous lines. For her, the portrait is not an object but rather the materialization of the sound, voice, and face of people. To create, the artist said that she sees with her ears and hears with her eyes. By juggling with the two methods of communication (sound and light), Egami Etsu captures the moment of ephemeral and intact beauty through her painting.

In the words of Nobuyuki Senzoku, the director of the Hiroshima Prefectural Museum of Art (Japan), Egami Etsu seizures the 'variant beauty' of people who have taken refuge between the universal standards of beauty and the grotesque. Starting with sketches that are reworked one after the other to capture the attitude, the look, the depth of spirit or the emotion of passing figures, Etsu is inspired by the Japanese philosophical concept of 'Ichigo ichie', inviting us to appreciate the present moment, to be more attentive to the small moments of happiness in everyday life and, finally, to be more connected to those close to us.

This feeling of happiness is transferred into this new series by the choice of colours taken from the rainbow motif, a symbol of dreams and hope. According to Kuang-Yi CHEN, Chairman of the Department of Fine Arts at the National Taiwan University of the Arts, 'the rainbow is revealed in the painter's unconsciousness and the public's ignorance, which is also a delicate misunderstanding'. Sliding along the bristles of his brushes, the paint is released in a thoughtful and instantaneous gesture to see richly coloured band appear. Juxtaposed against each other, each strip is separated by small white spaces that metaphorically represent, according to art critic Owen Duffy, the border of language and cultural differences.

In our contemporary society, where modern technologies plunge us into the crises of speed and urgency, doesn't Egami Etsu paints to reach out to us to reconnect with the essential and to soften the boundaries of social distancing?

Sign up to be among the first to know when new exhibitions by Etsu Egami or at A2Z Art Gallery open.
Sign UpLogin