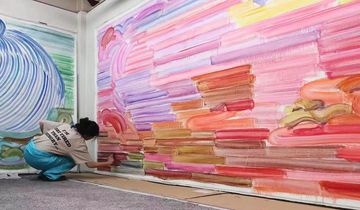 Etsu Egami graduated with a B.F.A. from the Central Academy of Fine Arts (CAFA) specialising in Oil Painting in 2016. She graduated with an M.F.A. at CAFA under the mentor of artist Liu Xiao Dong and studied at HFG in Germany. She is now in New York dispatched as a talented artist by Agency for Cultural Affairs, Japan Government. Etsu Egami currently lives and works between Tokyo and New York.

Growing up in the United States and Europe, and currently living and working in China, Etsu Egami experienced various communication barriers she encountered as a result. She felt that languages can 'only be sensed, not explained', thus becoming more interested in the discipline of language and communication. Etsu's works comprise various media forms, such as voice, video, and drawings, through which she strives to question human instincts and the authenticity of communication. Curator of Pompidou art centre Julie said about her, 'I saw all these specificities as a source, not only of misunderstanding but also of creation and richness in people's relationships.'. Chinese curator Feng Bo Yi also said 'Etsu's creation is about the concept and the significance of 'communication'. Through the paintings and videos which embody these mishearing games, as well as the evolution of times, the clashes between civilizations, we acquire a discourse on the barriers in language communications, and subsequently even trigger a crisis.'

Etsu Egami had her solo show in museum, Entrance gallery Vol.1 EGAMI Etsu in Chiba City Museum of Art, Japan (2020), and many countries. She also had many groups shows in Asia, including VOCA2020, Ueno-Royal museum, Japan (2020), Negotiating Space: I Never Thought You Were Like That – Third CAFAM Biennale, CAFA Art Museum, Beijing, China (2016); Neither Here nor There, Yuan Dian Art Museum, Beijing, China (2016). Between 2012 to now, Etsu won numerous awards. Most recently she is nominated as Forbes 30 UNDER 30 in 2020 and a finalist for Asian Art Prize of Sovereign Art Foundation in 2019.