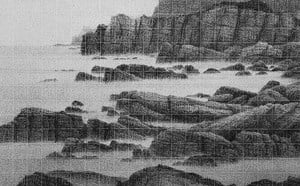 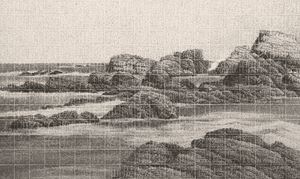 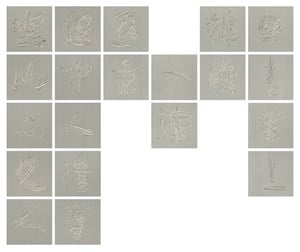 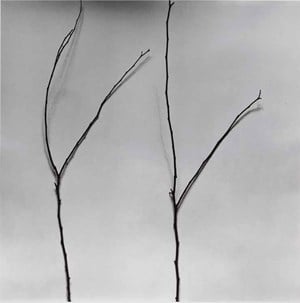 Classical calligraphy in modern China is regarded as an art of exquisite refinement and, alongside poetry, the ultimate expression of Chinese culture. The act of taking brush to paper is a fluid and dynamic dance, the shaping of each stroke imperative in relaying "meaning" to the character, for, the character innately carries the meaning of the intended word. In light of the influence of Western modernism and movements like Abstract Expressionism, as well as social and political changes in China, several calligraphers, percolating in the 1950's and blossoming in the mid-1980s, began to subvert the relationship between the character's form and its meaning, allowing the content of the composition to govern the form, as opposed to the form of the characters to dictate the composition. While the works maintained their calligraphic style, the image became increasingly abstract, and at the extreme, divorced from any specific language except the language of painting.

The artists in our two-part show The Voice of the Brush exhibit unique revitalisations of classical calligraphy, spanning the gamut of movements within modern calligraphy. The artists in Part II include internationally known Chu Chu, Hao Shiming, Lee Chun-yi, and Wei Ligang, as well as French artist Fabienne Verdier. These artists remove the characters from their textual context and treat them as artistic images in themselves, employing them as means for expressing individualism and contemporary ideas. As a unit, the artists succeed in bringing a new voice to the rigorous art of calligraphy, while paying homage to its place in Chinese heritage and identity.

As an accomplished ink painter, calligrapher and photographer, Chu Chu (Chinese, born 1975) combines elements from these three different disciplines in her work. The series Whispers of Trees perhaps best encapsulates her cross-disciplinary approach to artistic creation. First conceived during early spring of 2010, she took inspiration from branches she found during visits to the botanical garden near her home. After bringing them back to her studio she photographed them over a period of years. Upon printing the images, she painstakingly applied calligraphic poems and ancient text directly onto each photograph making each one of them unique.

Chu Chu attained her PhD in calligraphy under the tutelage of Wang Dongling and currently serves as the Vice-chairman of the Hangzhou Woman Calligrapher Association and an Associate professor at the Research Centre of Modern Calligraphy, China Academy of Art, Hangzhou. Chu Chu has been widely exhibited - including in France, Germany, England, the United States, Japan, Taiwan, China, and Hong Kong. We first showcased her works in Beyond the Jade Terrace in 2014 and have since held her first solo show in Hong Kong (2017). We also exhibited her works in Ink Asia 2015 and Art Basel Hong Kong 2016/17 with great success.

Born in 1977 Heze, Shandong, Hao Shiming is a Beijing artist who attempts to extract lines, the purest element in traditional ink, and reconstruct it into works that are both sophisticated and minimalist. In his calligraphic series, he doubles the character strokes and fills the frame with over-layers of identical text. Each of these strokes is equivalent to a semantic "thread" that he has plucked from a traditional symbol to transform and weave into his own expression of identity. His methodology reflects influences of Buddhism, Chinese philosophy and a dialogue on human ephemerality and renewal.

The cosmopolitan diaspora artist Lee Chun-yi (born Taiwan, 1965) moved to Hong Kong as a youth, pursued graduate studies in the United States, and returned to Taiwan to embark on an artistic career. With a revolutionary method departing from the conventional use of a paintbrush, Lee Chun-yi employs calligraphy through the use of Chinese seals and ink rubbings. He carves Chinese characters into pieces of soft wood to form chops, then stamps them repetitively on the paper to form a semi-photographic image. Literally building up a visual composition through words, his paintings function as symbolic poems, with the strength of the stamp indicating the intended tone of expression.

Lee has participated in over 30 group and solo exhibitions internationally. His works have been collected by the Ashmolean Museum of Oxford University, the Arthur M. Sackler Museum of Harvard University, the Asian Art Museum of San Francisco, the Phoenix Art Museum, USA; the Jiangsu Art Museum, the Qingdao Art Museum, China; the National Arts Education Institute, Taipei; the Hong Kong Museum of Art, and other public and private collections. This is the first time Alisan Fine Arts will be showing Lee's works, and for the occasion, he will be creating three new paintings.

The well-known French abstract artist Fabienne Verdier was born in Paris in 1962. A rebellious adventurer by nature, Verdier graduated from Ecole des Beaux-arts de Toulouse in 1984 and was subsequently awarded a grant to study calligraphy at the Sichuan Fine Arts Institute in Chongqing. Over the course of ten years in China she developed her skills with the traditional tools of ink painting, learning to meticulously copy script of the ancient masters. She then synthesized traditional calligraphy with a Western style of Abstraction to create bold, gestural works, imbued with the forces of motion and nature.

In 1989, Verdier was made the first and only foreign member of the National Calligraphers' Association, and in 1990 took part in an international calligraphy exhibition at the National Art Museum in Beijing. In 2017 she received a solo exhibition at the Musée Voltaire, Geneva. Her works have been collected by the Musée National d'Art Moderne Centre Pompidou; Musée Cernuschi; Palais de l'Assemblée Nationale; Ministère des Affaires Étrangères, Paris; Chinese Ministry of Culture, Beijing; and Honda Group, Tokyo, Japan. We have been working with Fabienne since 2014 and held her solo exhibition The Ink Discipline - A series of rare original prints by Fabienne Verdier as part of Le French May program in 2014. We also included her prints in several group shows, including Art Basel Hong Kong (2014), Ink Asia (2015) and When Less is More (2018). This is the first time we will be showing her works on canvas.

Originally trained in mathematics and classic calligraphy, Wei Ligang (Chinese, born 1964) has undoubtedly tapped into his analytic genius to revolutionize traditional calligraphy into a purely abstract art. Wei began to follow the style of modern calligraphy, adapting traditional rules and deviating from classic calligraphic structure. He gradually, however, began to push past textual playfulness and into a pure abstract form. He is well known for his "Wei squares" formula in which individual characters are deconstructed and reformed within the boundaries of a square (or circular) shape, resulting in the abstraction of traditional forms, while maintaining its roots in Chinese culture. Recently he is experimenting in new materials like lacquer and propylene, with the aim to bridge the divide between avant-garde calligraphy and Western art forms.

Wei Ligang was featured in the solo shows China in Ink & Wash: Exhibition of Wei Ligang's Works, at the Shanghai Art Museum (2006), Shanghai, China, followed by Wei Ligang Calligraphy Art at the National Art Museum of China, Beijing, China (2007). His works are in the collections of the British Museum; Asian Art Museum, San Francisco; San Francisco Museum of Modern Art; Bill and Melinda Gates Foundation, Seattle; Cernuschi Museum, Paris; François-Henri Pinault Family, France; National Art Museum of China and National Museum of China, Beijing; among others. We have worked with Wei Ligang since 2004 and have held two solo exhibitions for him (2006, 2015). We included his works in the Asian Cultural Council Fellows group show in 2011, Ink Asia in 2015, and three times at Art Basel Hong Kong (2013, 2015,2018).

The Voice of the Brush – Part II

Sign up to be notified when new artworks and exhibitions at Alisan Fine Arts are added to Ocula.