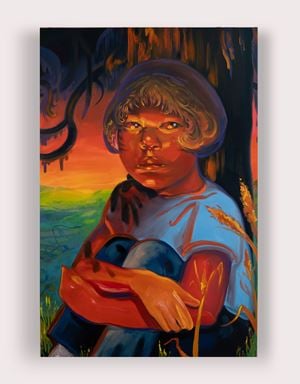 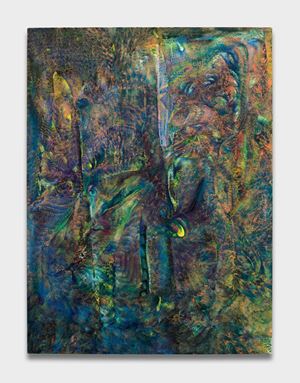 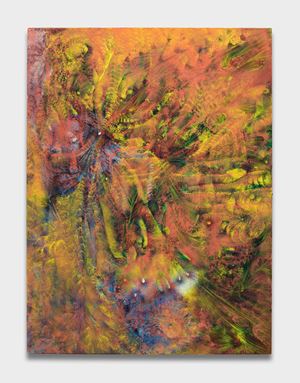 In a historic moment of vast upheaval, unprecedented in living memory, artists continue to create art that, as Josef Albers wrote, 'comes from the human soul and speaks to human souls.' Almine Rech's new exhibition, titled respectively with words from its three artists—Haley Josephs, Lucy Bull, and Aaron Curry—presents creators whose work can engage a metaphysical discourse as much as art historical and intellectual traditions, whether figurative or abstract, in living colour or in monochrome, painting or sculpture.

A glance at the artists' reading lists may illuminate matters. For Bull, it's anthropologist Michael Taussig's 2009 study What Color is the Sacred?, in which he contemplates color as a 'polymorhpous magical substance,' a notion that resonates with Bull. For Curry, it's Albers's lectures, including his 1935 talk 'Abstract Art,' which concludes, 'Art is spirit and spirit is eternal.' For Josephs, it's Eckhart Tolle's 2005 A New Earth: Awakening to Your Life's Purpose, which invokes a 'spiritual awakening.'

How do they bring such profound ideas to bear? Among other resources, they call on otherworldly colours and psychological exploration.

Josephs's wildly chromatic paintings of girls and women in nature often evoke modernists like Gauguin as well as Alice Neel's boldly confrontational subjects. If her young girls assume dreamy attitudes, as in Dream Child in the Boundless Yonder, there's something ominous about these dreams. Islands of Solitude, with its Narcissus-like figure, is Josephs's first triptych; nature is an imposing presence, inspired here by the landscapes in Maine where she created these canvases. These are girls and young women with rich inner lives, whose complexity arrives clothed in deceptively artless colour schemes. With their glowing skin, her subjects seem to have, as she says she would like to do, swallowed the sun.

Bull, meanwhile, paints surreal abstractions that possess both grand sweep and studied detail. She describes her canvases as both inward- and outward-looking: 'They are traversing the recesses of my mind, but also talking about the cosmos, even.' Her fine mark-making achieves an effect that buzzes on the surface, as if dosing us on some optical drug. Her practice is rich with historical affinities, such as the Pointillists, the Italian Futurists, and the Surrealist Roberto Matta.

Curry's sculptures engage with the bodily presence that is explicit in Josephs's work and implied in Bull's. Calling on formal qualities present in artists like Picasso and Calder, they gracefully and playfully engage with the force of gravity, which determines our own spatial and bodily experience and which dictates that we, and his quasi-figurative sculptures, find balance. Curry's sculptures begin with drawings and handmade maquettes that are often then developed through digital modifications and subsequently fabricated at often-monumental sizes; rather than aiming for seamlessness, they maintain some of the qualities of the handmade, lending the works in the current show a touch of whimsy despite their matte black surfaces.

Confined to his own quarters, following news of the pandemic while also creating music and sculpture, Curry, as well as Josephs and Bull in their own ways, has been thinking about priorities. 'Science and art are the most important things for humans,' he says, adding, 'And love, I guess.'

I Want to Eat the Sunset. We’re Talking About the Cosmos, Even. And Love, I Guess.?

21 new artworks have recently been added by Almine Rech.
Sign up now to be among the first to know when new artworks are added.