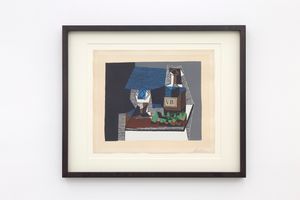 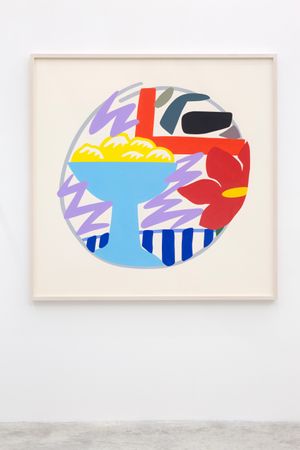 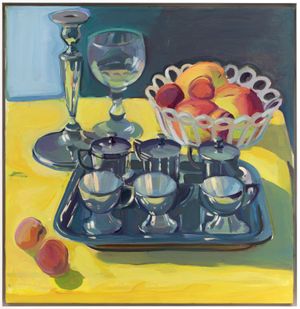 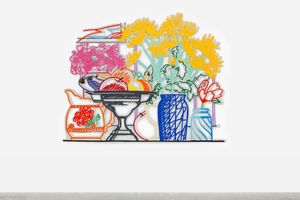 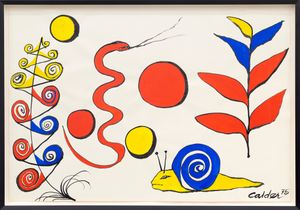 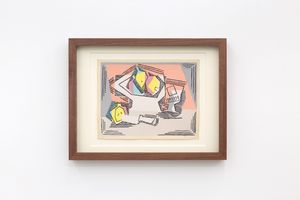 With extant works dating as far back as ancient Egypt, still life painting was formalized by a set of structures during the Renaissance period, and has remained its own significant class ever since. Typically depicting inanimate objects in careful arrangement usually upon a table or other flat surface, still life allows the artist a unique opportunity to test formal practices and experiment with light, shadow, space, composition, and perspective. Beginning in the late nineteenth century artists began to reconsider the strictures imposed upon still life painting, and by the twentieth century the idea of still life itself had morphed in surprising ways.

The two earliest of the works presented here, Bouteille et raisins and Verre et compotier (both ca. 1922) are rendered by Pablo Picasso in pochoir. Picasso based one of the works, Bouteille et raisins, on his oil painting by the same name, now in the permanent collection of the Kunst Museum Winterthur, Switzerland. Verre et compotier likewise follows this painting's energetic style. Using the refined pochoir method of stencilling, the wine bottle and grapes, fruit bowl and drinking glass that compose the two arrangements become Cubist fantasies of these everyday items. Picasso's discerning sense of colour is also fully evident. The deep cerulean and mahogany of Bouteille et raisins lend an element of the luxurious to the composition, while the pink background and citrine fruits of Verre et compotier vibrate with a jazzlike intonation.

Maria Lassnig's Silbernes Teeservice/Geburtstagsbild (1972) represents both an extension and a departure from her best-known work. Made during the years the artist lived in New York, the painting swerves from Lassnig's most iconic subject matter—self-portraits and investigations of her own body. The hallmarks of her work are nonetheless present here, in the sensual curves of the teacups on a tray, in the rich colour of the fruit in a bowl, and the tender brushstrokes that compose the shadows falling across the table. Despite the insensate items, Lassnig has infused the objects she has painted with an intimate life force.

In an Untitled gouache from 1975, Alexander Calder does away with the convention of representing inanimate objects altogether, composing a nature morte that in fact teems with life. In his signature, bold, primary colour scheme, Calder depicts and undulating snake and a wizened snail, framed on either side by wild flora. Gone too is the grounding influence of a table, upon which a still life's objects are usually settled. Here, the flora and fauna hover in a liminal space. Spheres of red and yellow float amidst them, a suggestion of celestial bodies that tether the amorphous arrangement with their gravitational pull.

In three works from the 1980s, Tom Wesselmann lends his still life work his signature Pop sensibility. The concentrated arrangement of objects in Wesselmann's Still Life with Fuji Chrysanthemums (Double Layer) (1985/1992) indicates a psychological tension that is only underscored by the liquid brilliance of the artist's materials. Using Alkyd paint, revered for its saturated colours, Wesselmann has painted onto cut steel, imbuing the work with an effect like neon lights. His two paintings on Bristol board, Still Life with Goldfish and Rose (1984) and Fast Sketch Still Life with Lemons (1988) embody a more open composition. In these two paintings, his choice of subject matter—both lemons and goldfish—nod to Henri Matisse, who included these items in many of his own still life paintings. In alluding to Matisse, the most prominent Post-Impressionist to subvert the genre a century before, Wesselmann's work opens and expands the still life into even further possibilities.

Through their various artistic styles and practices, these artists probe the conventional boundaries of still life painting, breaking from long-established traditions to push beyond thresholds and into new territories. Together, they form a narrative suggesting that the ancient story of still life painting itself is still being written today and into the future. Through these twentieth century masters, Still Life elucidates this modern evolution of the genre.

Sign up to be notified when new artworks and exhibitions at Almine Rech are added to Ocula.
Sign Up