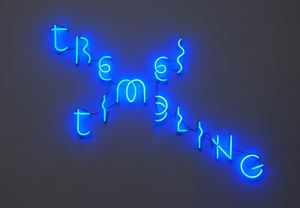 Capitain Petzel is pleased to present an installation by Yael Bartana, consisting of her new typographic work Abracadabra and the ever-relevant neon TREMBLING TIMES.

The new poster series 'Abracadabra' reintroduces an ancient spell as a comment on the rise of superstition and conspiracy theories. The artwork addresses both a fictional alternative way to 'fight' the current global Pandemic, and the rise of new movements denying scientific facts. The Abracadabra spell was used throughout history in magical gestures and performances. The mysterious term 'Abracadabra' first appears in the writings of Serenus Sammonicus, a medical savant who served as physician to several Roman Emperors. In his book, Liber Medicinalis, Sammonicus suggests a literary amulet against fever and malaria: the word Abracadabra written in the form of a triangle. Though the etymological origin of the word is unclear, it may well have derived from the Hebrew 'Evra KeDavra', literally meaning 'I shall create with the use of speech', a reference to the creation of the world, accomplished–as described in the Hebrew Bible–merely through the use of words. Anticipating the second wave of the Covid-19 catastrophe, and as a reaction to the desperate attempts of governments around the world to deal properly with the social, political and economic consequences of the pandemic, Bartana's work turns to the realm of the mystical, suggesting unconventional ways to approach the collective crisis, address matters of individual agency, of hope and consolation, while evoking historical practices that have been discarded in order to make space for modern science.

In the Studio Exhibition at Capitain Petzel, the posters are presented along with Yael Bartana's neon TREMBLING TIMES. Together, the works form an immersive installation which poignantly reflects on the condition of our contemporary times. The poster series 'Abracadabra' is currently also on view in the exhibition STUDIO BERLIN at Berghain, a collective presentation showcasing contemporary local artists, in support of the eponymous club. In 2021, Bartana will hold a solo show at the Jewish Museum Berlin with a new commissioned work for the museum, Malka Germania. She will also participate in group shows at the Hammer Museum, Los Angeles; New Tretyakov Gallery, Moscow; and Palais de Tokyo, Paris all in 2021. Other recent institutional solo exhibitions include the Philadelphia Museum of Art (2018); Musée cantonal des Beaux-Arts, Lausanne (2017); Stedelijk Museum, Amsterdam (2014); Secession, Vienna (2012); and Louisiana Museum of Modern Art, Humlebæk, Denmark (2012). Bartana was the first non-Polish artist to represent Poland at the 54th Venice Biennale with her acclaimed trilogy And Europe Will Be Stunned.

Bartana is currently taking part in two group shows in Berlin; The Invented History at KINDL – Zentrum für zeitgenössische Kunst on view until February 21, 2021, and STUDIO BERLIN at Berghain on view until the club reopens.

Sign up to be among the first to know when new exhibitions by Yael Bartana or at Capitain Petzel open.
Sign UpLogin