David Zwirner is pleased to present an exhibition of new paintings by Lisa Yuskavage. On view at 24 Grafton Street in London, this is the artist's first exhibition since the major survey of her work at The Rose Art Museum at Brandeis University, Waltham, Massachusetts in 2015, which travelled to the Contemporary Art Museum St. Louis.

The exhibition includes several works that continue Yuskavage's exploration of the dynamics of intertwined couples, while also furthering her interest in using colour as a vehicle for ideational content. Begun in the 2000s with dual portraits of female figures, she has in recent years created a series of symbiotic depictions of a female and male couple. Their relationship appears determined by carefully selected colour harmonies or contrasts–in some cases, one figure is cast in vibrant hues, while the other is in neutral tones. In works such as Ludlow Street (2017), the figures are connected to one another through pose, colour, and light, and contrast with their stark and colourless environment.

Other paintings in the exhibition depict single women or groups, with psychological narratives of tenderness and tension likewise described by formal elements within the compositions. The large-scale Déjà Vu (2017) presents a luminous female character in the center of a small crowd of male figures rendered in shades of greys and blacks, who ultimately emerge as ethereal manifestations. Keenly interested in the variety of ways the nude has been depicted across art history and within popular media, Yuskavage frequently lets her male and female characters assume roles traditionally expected of the other. For the artist, the meaning of a work is to be found equally in the representation of characters as in the 'emotional formalism' that gives the subjects expression through colouration and other pictorial inventions.

Born in 1962 in Philadelphia, Lisa Yuskavage received her B.F.A. from the Tyler School of Art, Temple University, in 1984 and her M.F.A. from the Yale University School of Art in 1986. Since 2005, the artist's work has been represented by David Zwirner. In 2006, two solo exhibitions were concurrently presented at David Zwirner and Zwirner & Wirth, New York, followed by presentations at the gallery in 2009, 2011, and 2015. Marking her fifth gallery solo show, this exhibition is her first with David Zwirner in London.

In 2015, The Rose Art Museum of Brandeis University in Waltham, Massachusetts, presented_Lisa Yuskavage: The Brood_, a major solo exhibition spanning twenty-five years of the artist's work. The show travelled to the Contemporary Art Museum St. Louis in 2016. A large-scale, comprehensive publication by Skira Rizzoli, published on occasion of the exhibition, created in close collaboration with Yuskavage, includes texts by renowned art historians, curators, and writers including Christopher Bedford, Suzanne Hudson, Catherine Lord, and Siddhartha Mukherjee, as well as an interview with the artist by Katy Siegel.

Yuskavage's work has been the subject of solo exhibitions at institutions worldwide, including The Royal Hibernian Academy, Dublin (organised as part of the Dublin Contemporary 2011); Museo Tamayo Arte Contemporáneo, Mexico City (2006); Royal Academy of Arts, London (2002); Centre d'Art Contemporain, Geneva (2001); and the Institute of Contemporary Art, University of Pennsylvania, Philadelphia (2000).

Throughout her career, Yuskavage has lectured on the subject of her own work as well as that by other artists, including Giorgio de Chirico, Philip Guston, Francis Picabia, and Édouard Vuillard. 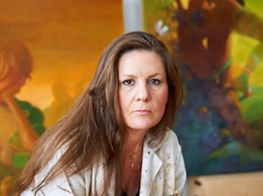 With a career spanning over 30 years, New York-based Lisa Yuskavage (b. 1962, Philadelphia) is a figurative painter minutely versed in the history of the medium, channelling artists from Francisco de Goya to Édouard Vuillard and Philip Guston in her ostensibly kitschy canvases. Her paintings are immediately recognisable by their absurdly...

Sign up to be among the first to know when new exhibitions by Lisa Yuskavage or at David Zwirner open.
Sign Up