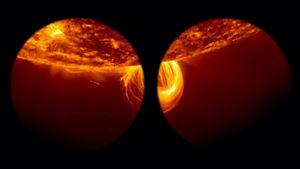 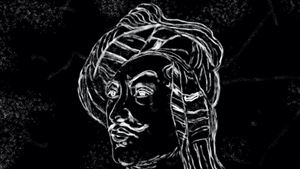 The nodal axis of Between Repetition & Reticence revolves around the famed astrophysicist and Banglaphone public intellectual Meghnad Saha (1893-1956). The work approaches Saha's oeuvre as an entry point into a fragmented and highly self-reflexive exploration of the silences and disavowals in Bengali cultural history. Distinguished by his passionate involvement in the intersections between science and culture, Meghnad Saha remains a key figure in the twentieth-century history of science and technology in South Asia. However, a critical appreciation of his political salience has been missing from the standard narrative. Hazra borrows from a range of North Atlantic, South Asian and Bengali sources of popular culture, exploring complex connections between scientific enquiries and ideological differences in the backdrop of Saha's unique interventions in science and politics.

The exhibition confronts the viewer with several simultaneous visual and aural experiences immediately upon entry into the gallery. Using the depression central to the space, is Lapping Up, a video installed low on a screen, whose sound is culled from, amongst other things, statistical data on unemployment, foregrounding a large projection, Vidyut-Chaumbakiya (In Seven Sections). The term Vidyut-Chaumbakiya translates to electromagnetism, an area of fundamental importance for Saha's scientific work. Working as a fulcrum to the entire show, this video includes a lecture-performance along with references to nuclear physics, western and eastern classical music, art-house cinema and Marxism amongst a host of other signposts, compelling the viewer to re-imagine several seemingly naturalised certainties. The work nudges numerous tipping points, notable amongst them — a moment when the projection screens the section titled "Fraud Weds Fraternity".

At the other end of the gallery, Bornalimiti (In Five Sections) serves as a preface to Vidyut-Chaumbakiya and introduces Hazra's sense of repetition and reticence to the show. Bornalimiti traces the longer arc of Saha's dissenting sensibilities and argues that the full significance of Saha's insistence on a democratic ethos in the fields of higher education and research hasn't yet been fully comprehended. To some viewers, the use of double circular shapes to layer the video may resemble the viewing scopes typical of many scientific apparatus. To others, it might appear as a tool for patterns and repetition. The work critiques the strange logic that insists on separating Saha's scientific and nation-building work from his more directly political work, such as his interventions in the Indian Parliament or his involvement with the contested question of post-Partition refugee settlement. Through music and filmic collages with archival footages of dammed rivers, Bornalimiti stages Saha's contributions to river valley projects as the site to explore the tensions between the analytical categories of caste and class. In the process, we witness an allusive conversation between Saha and Rabindranath Tagore, the poet-visionary and a co-resident of Saha's deltaic land, as well as with Saha's almost near- contemporary — the political philosopher and radical constitutional theorist (1891–1956) Dr. B.R. Ambedkar.

For Hazra, a sustained engagement with Saha's oeuvre makes him question if the lifeworlds of caste can indeed be relegated to the status of a marginal 'epiphenomena 'when evaluating the theoretical and the substantive content of a scientist's work. What makes this engagement very difficult for the artist is his ambivalent affinity to an intellectual tradition that had once arrogantly asserted the sup- posed irrelevance of caste in emancipatory politics. Through dialogue, monologue, self-reflection or a combination of them, the artist continues to grapple with this difficulty. In this highly layered, dense and materially nuanced exhibition, what emerges as one approaches the title of the work, hidden away at the dead end of the gallery, is Hazra's reticence, a conflicted subject- position and his repeated attempts to tangentially circle around the anxiety that grows intimately into the work. Perhaps the title of the work is literally a bland statement of this unstable equilibrium. Is it possible that the work tries to self-consciously articulate a polemical position, perhaps against its own grain or perchance is this polemics an over-compensation for something else?

Sign up to be among the first to know when new exhibitions by Abhishek Hazra or at Experimenter open.
Sign UpLogin