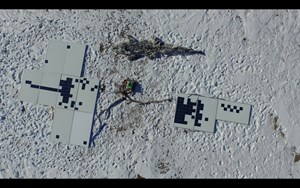 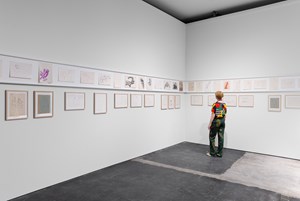 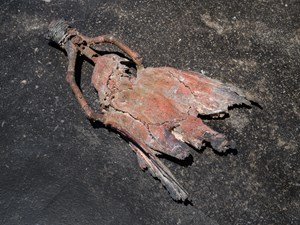 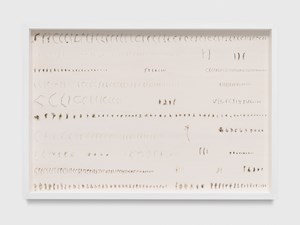 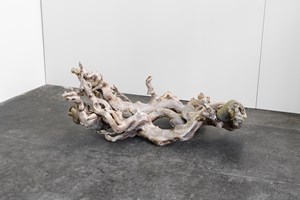 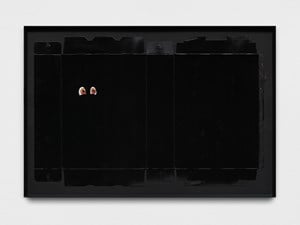 Galeria Plan B is pleased to announce the opening of A Tale of Apparitions—a group exhibition with artists Nico Vascellari, Ion Vlasiu and Tuguldur Yondonjamts-on Friday, the 28th of June. The exhibition is organised in collaboration with Galeria Quadro, Cluj and Ioana Vlasiu.

The exhibition proposes a dialogue between the positions of two contemporary artists and the approach of the Romanian sculptor Ion Vlasiu dating back to the 1930s. The dialogue is based on what seems to be the search for deep, sometimes animist, mythological and unconscious resources of the human relationship with nature.

In his last study (1961), Jung stated some conclusions regarding the alienation of modern man which are once again becoming extremely relevant:

'As scientific understanding has grown, so our world has become dehumanised. Man feels himself isolated in the cosmos, because he is no longer involved in nature and has lost his emotional "unconscious identity" with natural phenomena. These have slowly lost their symbolic implications. Thunder is no longer the voice of an angry god, nor is lightning his avenging missile. No river contains a spirit, no tree is the life principle of a man, no snake the embodiment of wisdom, no mountain cave the home of a great demon. No voices now speak to man from stones, plants, and animals, nor does he speak to them believing they can hear. His contact with nature has gone, and with it has gone the profound emotional energy that this symbolic connection supplied.'

At the beginning of the 20th century, modern art, in particular primitivism and surrealism, downshifted to tribal art and ethnography in search of essential, 'untouched' universal values and fresh forms of expression. A special case was that of artists who-like Ion Vlasiu himself-came from traditional rural societies; for them this down-shift was an awareness of one's own preindustrial background and world view.

The interest is not in those identity approaches which pursue ethnic and national excellence, but rather in those which aim at deeper layers of identity, ones at which the human, the animal and the vegetal are very close to each other and are all regarded as expressions of the same forces of nature.

Tuguldur Yondonjamts appeals to shamanic culture, which specifically sees the fluidity of phenomena, the intertwining of rational and unconscious, making possible a natural passing between the worlds by means of trances. At the beginning of his video An Artificial Nest Captures a King (2016), as in a documentary insert a man sitting on his motorcycle in the wide open steppe can be found singing beautifully what may be a traditional Mongolian song: 'Some of the time travellers hibernate in the permafrost. The time travellers will arrive soon. Very soon, soon, very soon...' Then the landscape suddenly changes and we see a frozen desert in which the artist undertakes different journeys: going round and round in a car, then cocooning in a crocodile-like persona which thus seems to exit hibernation in the permafrost. The unexpected apparition of the crocodile in the snowy landscape is a reference to the discovery some time ago by Soviet archaeologists of an alligator fossil in Mongolia, evidence that this species once lived there. Thus the archaeological chronology and the shamanic belief in the possibility of the metamorphosis of humans into animals or vice versa coincide in a miraculous way.

Nico Vascellari found, during his walks in a forest, the bodies of various animals. Finding a crow, he remembered that when his dog died he had had to choose between burial and cremation. He 'buried' the crow in earth and then poured bronze over it, the heat of the molten sculptural material effectively cremating the corpse.

The bronze not only takes on the form of the dead but also gives it new life in an animist sense. Such an interpretation is also suggested by his recent work Eye in which he paints cardboard cereal packets completely black, leaving visible only the eyes of the animals which are used by advertisers to attract buyers. In this way the animal eyes, the 'doors of the soul', are recycled by the artist for a more magical use.

The title of the exhibition is borrowed from one of the books of Ion Vlasiu. 'Apparitions', 'spirits of the forest', 'chimaerae', and 'sick animals' are words that frequently occur in the titles of his works and define the horizons of his thinking.

Sometime in 1933, during a walk in a forest, Vlasiu had the revelation that all life forms were animated by the same energies, which he then named 'rhythm'. The show includes two drawings made during that walk.

After a long period of research, the artist freed himself from his own ambition and the expectations of the restrictive official art system and after 1960 started to boldly express his early vision, displaying the raw manifestations of matter in different forms of existence. His contact with nature is so strong and direct that he can express himself in a variety of ways without restrictions of genre or style: figurative wood sculpture, objet trouvé from nature (wood, stones), anthropological photographs of scarecrows, and a great number of child-like surrealist drawings largely nourished by popular superstitions and beliefs. This newfound freedom of the artist meant also the recovery of his own roots, which allowed him to be freshly involved in nature, letting his unconscious identity bring to the surface the spirits of the river, the wisdom of snakes, the voices of stones, plants and animals.

Text by Sebestyén Székely, co-curator of the exhibition. Courtesy Galeria Plan B.

In response to the global effort to tackle the COVID-19 pandemic, Galeria Plan B will be closed until 31 January 2021.

A Tale of Apparitions

Be among the first to know when new artworks and exhibitions at Kunstgalerie Lutea Pop GmbH / Galeria Plan B are added to Ocula.
Sign Up