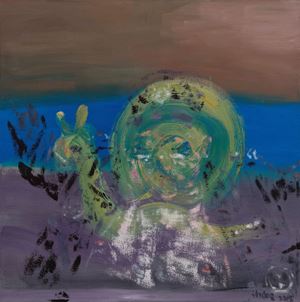 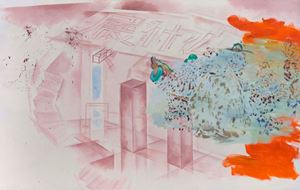 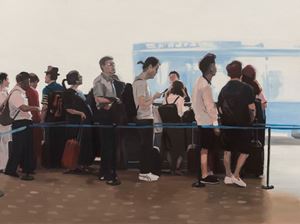 Galerie Urs Meile is pleased to announce the Xie Nanxing solo exhibition A Roll of the Dice. The exhibition unfolds around the artist's recent thinking on 'waiting' and 'randomness,' presenting works from three series: 'What to Exhibit' (2017), Seven Portraits (2018), and 'A Theater of Waiting' (2019).

Just as a roll of the dice brings the opportunity to make a decision, waiting is preparation for the next possibility. Within the inner logic of the language of painting, Xie Nanxing attempts to restore painting's openness, and to trace back the unquantifiable conceptual pathways for which painting is a carrier. If the process of painting is beset on all sides by pitfalls and complex struggles, it is precisely because painting is a process of constantly revising and refreshing the self through waiting and randomness.

For Xie Nanxing, waiting implies a relationship of suspension and contention. All unoccupied exhibition space is in a state of waiting. The What to Exhibit series, while highlighting the changes that take place before and after the artist takes over the exhibition space, also reveals art's power to bestow legitimacy: it is only when the artworks intervene in the exhibition space, only when the undefined, neutral, spectral empty space is filled with a cacophony of artistic spirits and bizarre ideas that it gains legitimacy. When asking 'what to exhibit,' the artist is also casting doubt on the critical standards of art and the discourse on its exhibition.

In the 'Seven Portraits' series, the artist continues his longstanding focus on portraiture. The names and personalities of the seven dwarfs from Snow White provide the prototype for this series of portraits, corresponding to seven friends with widely disparate personalities in the artist's circle. Among the neutral proportions, bright background colours and minimalistic depictions, a series of portrait figures is squeezed out through the process of transformation into the language of painting.

The triptych A Theater of Waiting is the artist's attempt to represent the complexities of public space. When non-fictional, non-narrative dramas play out together, the public space of the airport is no longer just a setting for waiting waiting at security, waiting at the gate, waiting on the runway—but points to a theatre of waiting, where the hierarchy between everyday happenings and human figures is constantly being rearranged, leaving the audience to imagine the dramatic conflicts.

When one thinks back to Xie Nanxing's earlier works, whether in reproduction or in major international exhibitions such as the 48th Venice Biennale (1999) and Documenta 12 (2007), one can easily recall the strange beauty of his exactingly executed canvases, which seldom tell us anything directly but leave us with a great deal to consider. If his recent paintings don't look like the previous ones, this is because Xie Nanxing refuses to lapse into a signature style. With the new paintings on view in A Roll of the Dice Xie Nanxing remains compelled to advance the medium's potential through experimentation and innovation.

A Roll of the Dice

Sign up to be among the first to know when new exhibitions by Xie Nanxing or at Galerie Urs Meile open.