LogoutLogin
My OculaSign Up
Galerie Urs Meile
Follow
Lucerne  |  Select Location
Zhou SiweiBUBBLE 02, 2015Oil on canvas
180 x 140 cm Galerie Urs Meile Enquire
Zhou SiweiDUNE (DOUBLE/VERTICAL), 2014Oil on canvas
180 x 140 cm Galerie Urs Meile Enquire
View More Works By This Artist
Galerie Urs Meile is pleased to present Zhou Siwei’s (born in 1981 in Chongqing, China) first solo exhibition in Lucerne. The show will focus on his recent paintings and sculpture, but the artist also works in other media, such as photography, drawings, and installation. The works on display mark a continuation of Zhou Siwei’s previous exhibition, Round Studio, in 2014. Round Studio refers to the artist’s idea that each individual work is the beginning of another one and at the same time it is also the end of an older artwork.

Sources for Zhou Siwei’s paintings are usually preexisting compositions of colours and forms, such as logos or other designs. For example, his paintings BUBBLE 01 (2014, oil on canvas, 200 × 250 cm) and BUBBLE 02 (2015, oil on canvas, 180 × 140 cm) are based on a tutorial on how to make digital drawings on a computer. FENCE (SUNSET/UPSIDE DOWN) (2014, oil on canvas, 200 × 250 cm) is also based on a computer graphic of a fence, while DUNE (DOUBLE/ VERTICAL) (2014, oil on canvas, 180 × 140 cm) and ENVELOPE (2013–2014, oil on canvas, 180 × 140 cm) are based on schematic representations of a dune and an envelope. Zhou Siwei says he is interested in schematic depictions because of their effect on the beholder. According to Immanuel Kant, schemata are the transcendental link between sensual observation and the concepts of reason. They are the connection between insight, perception, and sense. Kant wasn’t talking about schematic images; rather, he coined the concept of 'schema' to describe how the human brain structures information and creates patterns. Yet, his definition helps to understand the ambiguous nature of schematic designs. A schematic image is also both abstract and concrete. It doesn’t depict a specific fence, but portrays a universal idea of a fence. In that sense, it is closer to words and language than to the world of concrete visual impressions. It is an abstract invention that identifies and stands for a group of things. The digital drawing tutorial Zhou Siwei used as a model doesn’t teach how to draw a specific bubble, but how to draw bubbles in general. Additionally, the dune looks more like a logo of a dune, with its exaggerated and emblematic appearance. Zhou Siwei thinks that this reduced, abstract imagery will leave its beholders feeling empty and ambiguous due to its lack of connection to the real, sensuous world. On top of that, the artist confuses viewers by his choice to exhibit the landscape-format painting like a portrait, hanging it vertically so that the shape of the dune only becomes recognisable after the viewer reads the title and turns his head. Zhou Siwei also hung ENVELOPE, another landscape format, vertically and blurred the very familiar shape to make it less recognizable at first sight.

He dilutes the colour with a lot of oil and never uses white in his paintings. As a result, his layers are transparent, on purpose, 'I want the different layers all to be transparent, and leave them visible to the viewers, although some are not very accurate or appropriate.' Each of his paintings takes on a colour scheme that is rich, but at the same time somewhat neutral. The colours are bright without being vibrant. One can see older versions of the painting through the transparent layers and also recognise each brushstroke. The brushstrokes give a certain rhythm to the paintings, while the depth of the transparent layers adds the element of time.

As the idea of the round studio implies, Zhou Siwei’s regards his oeuvre as a whole, a process of evolution and repetition. The relationship between the individual works is apparent. Zhou Siwei also created the sculptural work in the exhibition, MODEL 01 (NO IMAGE) (2015, resin, sculpture 1: 4 pcs, between 10 × 6 cm and 68 × 8 cm, shelf: 3,5 × 350 × 55 cm), in relation to the paintings on display. On a wooden shelf with a white top he placed a variety of shapes sculpted out of pink resin. Here, the practice is contrary; he doesn’t build up layer after layer, but destroys the original shape of the resin block. One of the pale pink objects is reminiscent of the BUBBLE paintings, while another shape corresponds to FENCE. For Zhou Siwei, these sculptural objects are his connection to reality, because they are tangible, and also because working by hand seems to him more concrete than the transcendental space he creates with diluted oil colours. His sculptural works transfer the abstract designs back into three dimensions and, in doing so, transform them back into to a concrete object that again belongs in the realm of the senses. 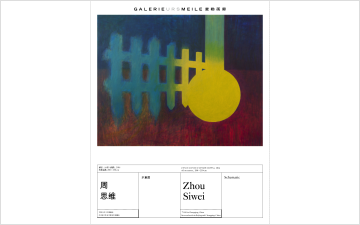 Sign up to be among the first to know when new exhibitions by Zhou Siwei or at Galerie Urs Meile open.
Sign UpLogin