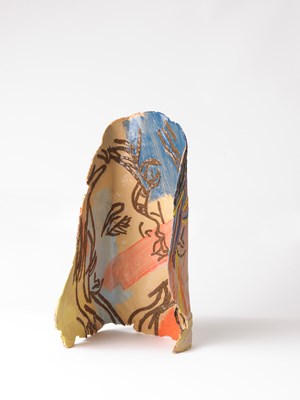 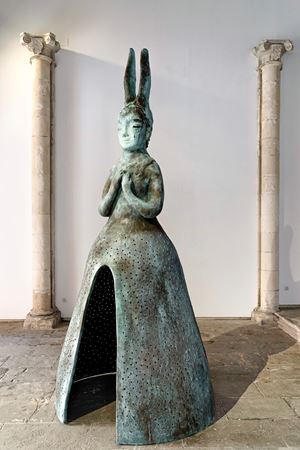 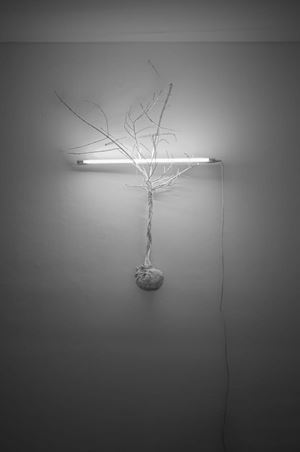 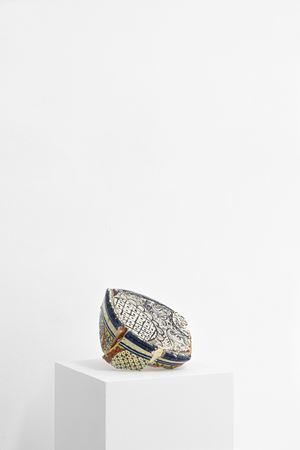 Leiko Ikemura's bronze sculpture Usagi Kannon–a monumental figure with rabbit ears and a human face–is one of the artist's most significant motifs. The 2011 Fukushima nuclear disaster and the subsequent birth defects in animals inspired the Japanese artist to create this sculpture. Usagi Kannon (jap. Rabbit Madonna) is reminiscent of temple sculptures and its walk-in bell-shaped skirt becomes a protective shrine. Ikemura originally conceived two Usagi Kannon as a couple: one with a smiling face as a hope-giving figure for all growing people and living things, and a mourning one, dedicated to the people and living beings who died and suffered losses.

The artist herself describes this hybrid creature as a symbol of life and care: 'The skirt is like a cave where you can seek protection, with light sources in it through the holes in the skirt and the hole in the head and thus the light from the sky. The small holes and the darkness in the skirt create a starlike phenomenon as if you were protected inside the universe. Usagi Kannon is a synthesis of the Eastern and Western culture, standing between the Buddhist tradition of Kannon and the Christian iconography of the Virgin of Mercy.

Usagi Kannon II is part of the collection of Museum für Ostasiatische Kunst in Cologne, while another version of Usagi Kannon I is permanently installed at the Stein Egerta sculpture garden inLiechtenstein. The National Art Center in Tokyo recently dedicated an extensive retrospective to Ikemura, where both Usagi Kannon were installed, both indoors and outdoors. The show later travelled to the Kunstmuseum Basel in 2019.

In the space adjacent to the Oratori De Sant Feliu, we present a selection of sculptures by Ghada Amer, Leiko Ikemura, Marcelo Viquez and Bernardi Roig–artists who have accompanied and formed the program of the gallery in Palma for many years–being a small preview of what will come next.

The Japanese artist Leiko Ikemura (Tsu / Mie, Japan) studied literature in Osaka and Spain before studying painting at the Escuela Superior de Bellas Artes de Sevilla in 1973. Later, she lived in Zurich for several years and lives and works in Berlin since the eighties. The first period of her work focuses on drawing, devising an authentic creative language, she begins to discover the shape of paint and clay. Her work is driven in part by a deep reflection on her own femininity and an attempt to make a place for herself as a woman between her native Japan and her adopted home in Europe. She has been honoured with numerous internationally solo exhibitions, most recently at the Kunstmuseum Basel, Switzerland; the National Art Center, Tokyo, Japan; the Nevada Museum of Art, Reno, USA;the Vangi Sculpture Garden Museum, Mishima, Japan; the Staatliche Kunsthalle Karlsruhe,Germany; Tokyo National Museum of Modern Art, Japan. In 1999 she occupies the Japan pavilion at the Melbourne International Biennial. Her works are part of collections such as the Kupferstichkabinett der Staatlichen Museen zu Berlin;the Bundeskunsthalle Bonn; theKunstmuseum Düsseldorf; the Staatliche Kunsthalle Karlsruhe; the Nevada Museum of Art, Reno;the Kunstmuseum Basel; the Albertina Museum, Vienna; the Centre Pompidou, Paris; the National Museum of Art, Osaka; or the Shiga Museum of Modern Art, the National Museum of Modern Art and the Hara Museum of Contemporary Art in Tokyo. Between 1990 and 2015, Ikemura held a professorship at the Universität der Künste, Berlin. Since 2014 she has been teaching at the Joshibi University of Art and Design in Kanagawa, Japan.

Bernardi Roig (Palma de Mallorca, 1965) lives and works between Binissalem and Madrid. He began to paint as an autodidact. He is a multidisciplinary artist who works both on paper and in painting, as well as photography, sculpture and film. He has participated in several editions of the Venice Biennale, and has been extensively exhibited in solo and group shows, most recently at La Tabacalera, Madrid; VIDEOTAGE HK, Hong Kong; Instituto Cervantes, Frankfurt; Zentrum FürInternationale LICHTKUNST, Unna, Dortmund; Sala Alcala 31, Madrid; Museos de la UniversidadNacional de Tres de Febrero, Immigrant Hotel, Buenos Aires; the Palais des Beaux-Arts, Brussels; Alte Pinakothek, Munich or e Es Baluard, Museu d'Art Modern i Contemporani, Palma. In 2012 he held the exhibition 'Walking on faces' in La Llotja in Palma de Mallorca. His work is part of national and international collections such as The Phillips Collection, Frissiras Museum or the IVAM, Institut Valencià d'Art Modern. In 2021 Bernardi Roig will present a new solo exhibition at the Sant Feliu Oratory.

The painter, draftsman, sculptor and video artist, Marcelo Viquez (Montevideo, Uruguay, 1971), has lived and worked in Mallorca for almost two decades. He studied fine arts in Montevideo, and later graphic design in Cuenca, Spain. In 2019 he participated in Bienalsur at the CCK, Centro Cultural Kirchner in Buenos Aires and, the same year, after residing at the Los Guayabos Workshop in Guadalajara, Jalisco, he had his first exhibitions in Mexico. His work has been exhibited in numerous solo and group exhibitions of national and international recognition, such as NRProjects, Berlin; Tomás y Valiente Art Center, CEART de Fuenlabrada, Madrid; U37 Raum für Kunst, Berlin; Es Baluard, Museu d'Art Modern i Contemporani, Palma; CCA Andratx, Mallorca; Herning Museum of Contemporary Art, Herning; National Museum of Visual Arts, Montevideo, Uruguay.His work is part of numerous collections such as Es Baluard, the Museum of Modern andContemporary Art in Palma, the Olor Visual Collection of the Ernesto Ventós Foundation, the Tomás Ruiz Collection or the Montana Mobler Collection in Denmark.

Ghada Amer (Cairo, Egypt, 1963) has lived and worked in New York since the 1980s. She moved toFrance with her family in 1974, where she studied fine arts at the Villa Arson in Nice. She has participated in several internationally acclaimed biennials, in Rabat, Venice, Sydney and theWhitney Biennial. She has recently exhibited at Dallas Contemporary, Texas; Center de Création Contemporaine Olivier Debré, Tours; Emerge at Voltaire, Paris; the Tel Aviv Museum of Art; KWInstitute for Contemporary Art, Berlin or the Whitney Museum, New York. Her work is in internationally acclaimed collections such as the Art Institute of Chicago; the Centre Pompidou,Paris; the Detroit Institute of Art; the Fond National d'Art Contemporain, Paris; the GuggenheimMuseum, Abu Dhabi; the Israel Museum, Jerusalem; the LaM Museum, Lille; the Sammlung Goetz, Munich or the Samsung Museum, Seoul. Since the end of the 1990s Ghada Amer has been intervening in the public space, at the beginning of 2020 she occupied the Plaza Caudillos in Zapopan, in collaboration with the Museum of Art of Zapopan, Mexico and she has recently intervened in the gardens of the Rockefeller Center in New York.

Sign up to be among the first to know when new exhibitions by Leiko Ikemura or at KEWENIG open.
Sign UpLogin