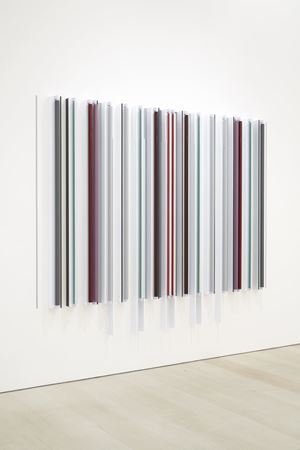 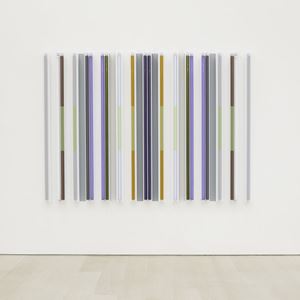 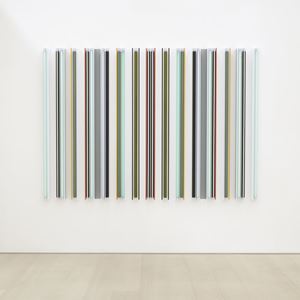 In returning to the use of solely ambient light, Robert Irwin's new sculptures embody the culmination of seven decades of rigorous experimentation.

Robert Irwin's work has continually reshaped the boundaries of what art can be. Unlights brings together eight new sculptural works that harken back to his innovative experiments of the 1960s while further expanding an influential, lifelong inquiry into the fundamental conditions of human perception: what Irwin has called the 'seemingly infinitely textured field of our presence in the world.'

Irwin's new works are composed from unlit six-foot fluorescent lights mounted to fixtures and installed in vertical rows directly on the wall. The glass tubes are covered in layers of opulently coloured translucent gels and thin strips of electrical tape, allowing the reflective surfaces of unlit glass and anodised aluminium to interact with ambient illumination in the surrounding space and produce shifting patterns of shadow and chromatic tonality. Reflecting his recent turn toward the perceptual possibilities of unlit bulbs, Irwin's new body of work expands the range of possibilities for how we experience sensations of rhythm, pulsation, expansion and intensity, while continuing the artist's long-standing interest in registering the immediacy of our own presence in space.

Expanding from his breakthrough disc paintings of the late 1960s, Irwin's new works effectively dissolve the perceived border between object and environment, focusing the viewer's consciousness on the act of perception. Each light fixture in Irwin's sculptures contains one or two unlit bulbs-or no bulb at all-while alternating gaps of 'empty' wall are painted in subtle shades of grey, producing a sense of uncertainty about what is tactile and what is merely optical. As the shadowed, painted and reflected intervals of space reverberate in the viewer's visual field, the wall itself enters the composition, destabilising any sense of figure and ground. To encounter Irwin's sculptures is thus to allow oneself to be caught in a ceaseless oscillation between flatness and volume, transparency and opacity, solidity and atmosphere.

It's not about answers. It's the constant pursuit of the possibilities of what art is.

In Irwin's art, the object functions as a kind of score for orchestrating "the continual development and extension of humans' potential to perceive the world." Although unlit, the bulbs in these new sculptures are therefore never "off." Their optically rich surfaces serve as energetic loci for heightening the sensory possibilities of the human body. In their chromatic complexity, the works convey an almost painterly quality, recalling Irwin's origins as a second-generation Abstract Expressionist painter in the 1950s. Suggesting a rhythmic, minimal composition of repeated linear elements, the works also evoke his innovative line paintings of the early 1960s, which involve us physically and perceptually in an open-ended, immersive and transitory experience of seeing.

Widely recognized as a pivotal figure in contemporary art, Irwin is closely associated with the Light and Space movement that emerged in Los Angeles in the 1960s, and he has continued to live and work in Southern California for his entire career. He first used fluorescent lights as substrates for producing what he has called a "conditional art" in the 1970s, often in combination with architectural scrims and other spatial interventions. In the 1990s he introduced colored gels to the fluorescent tubes to alter the chromaticism of the light, and, over the past decade, began isolating the bulbs and fixtures as sculptural objects in their own right. In returning to the use of solely ambient light, Irwin's new sculptures embody the culmination of seven decades of rigorous experimentation.

"Everything in the world is ultimately conditional," Irwin has observed. "There is nothing that's transcended or infinite or whatever you want to call it. Everything acts within a set of conditions." Like all of Irwin's works, his new sculptures respond differently to the conditions of each specific environment in which they are installed, attuning our senses to a given context and making possible an intuitive and incidental experience of seeing that resists rational or conceptual explanation. "It's not about answers," the artist once remarked, but rather about the act of questioning: "It's the constant pursuit of the possibilities of what art is."

Sign up to be among the first to know when new exhibitions by Robert Irwin or at Pace Gallery open.
Sign Up