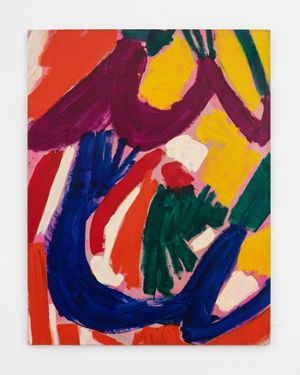 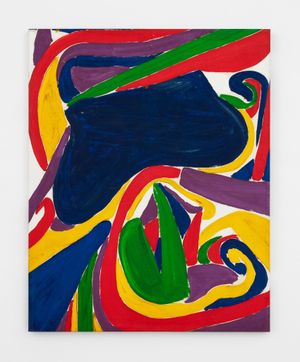 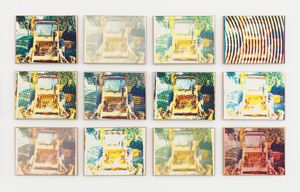 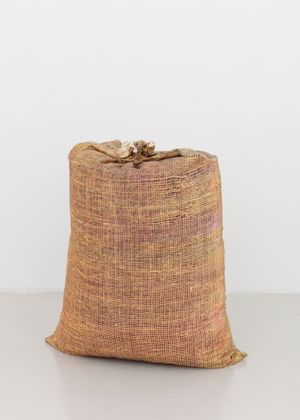 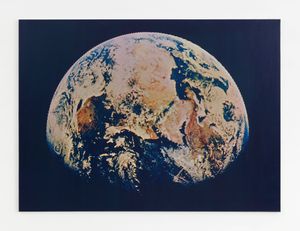 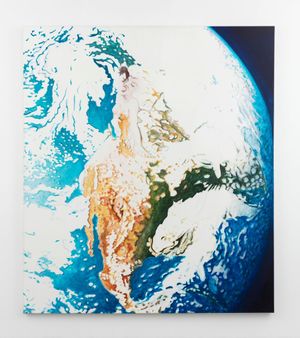 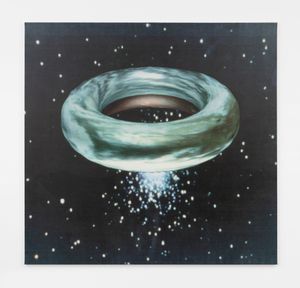 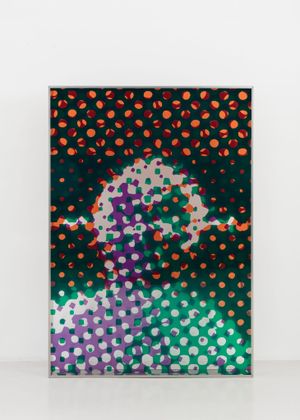 Perrotin is delighted to host the first exhibition by Alain Jacquet upon representation of the Estate. This major presentation, spanning several decades of the artist's career, is displayed on all three gallery spaces in Marais and was conceived in close association with the family of the artist. A comprehensive catalogue of the artist's work will be published by the Alain Jacquet Comity next year.

As diverse in its techniques and forms as it is coherent in its principles, the work of Alain Jacquet constitutes a continuous series of metamorphoses around the phenomenon of perception. From '100% handmade' to '100% machine-made1,' he has explored the many ways in which our gaze is permeated by images in the age of technological reproduction.

Born in 1939, the artist belonged to the generation that grew up with the explosion of consumption and the unprecedented proliferation of images. Indeed, it was in the form of photographic reproductions that he first became acquainted with the American abstract painters who inspired his early canvases. It would seem that each of these works, with their sweeping, abstract-looking gestures, began with a reference image, as was the case with another painting from this period titled Lever de soleil sur la falaise (1960). Indeed, this 'latent image' is a constant principle in his work. Based in a collective or individual memory, such latent images are found in the series that follow, starting with Jeux de Jacquet. A punning reference both to backgammon and his own name (in French, the same word), these canvases display irregular scrolls, curves and triangles in greens, blues, yellows, reds and whites that echo the colourful forms of a backgammon board. Enriched with purples and pinks, this baroque vocabulary reappears in his 'Images d'Épinal' (1961–1962). As the series title indicates, these are based on the famous popular prints associated with the town of Épinal, which his brush transposes in simplified form onto large-format canvases. It is as if the artist is reducing abstract expressionism to the status of a simple visual image, thereby alluding to the 'tendency of art history books to transform abstraction into an image.'2 Whether in the 1960s or today, to look at an abstraction, a work that escapes representation in favour of pure presence, is necessarily to correlate it to the visual references that inhabit our gaze—in other words, to see it as 'an image' of abstraction.

It was also from reproductions that Jacquet learned about Pop Art at the turn of the 1960s. He was struck by its closeness to his own researches into mass imagery and impelled to strike up a dialogue with his American peers.3 This was at its most productive with Roy Lichtenstein, whom he met in New York in 1964, and whose paintings he reproduced in several of his works, such as Camouflage Lichtenstein/Picasso, Femme dans un fauteuil (1963). Here, Lichtenstein's original canvas, itself a transposition of Picasso's painting into his signature dots, is overlayered with a juxtaposition of sheets of undulating colour characteristic of Jacquet's first Camouflages. This work was followed in 1963 by Camouflages involving the telescoping of highly diversely images sampled from popular culture and the history of art, based on the principles of superimposition and hybridisation. Each of the unambiguously Pop paintings in this series is 'a plane of condensation, a surface of passage and switching, an overlapping of different strata of culture, different crystallisations of space and time.'4 In other words, one image always hides another, in accordance with a logic of embedding that draws on the density of our visual memories.

This logic is also at work in one of the artist's best known pieces, Le Déjeuner sur l'herbe (1964). This canvas marks the transition from a manual practice of painting to photomechanical printing, making the artist a pioneer of what the critic Pierre Restany called Mec'Art. It involves a silkscreen transfer, via a grid of blue, yellow, red and black dots, of a photograph for which the artist's friends mimicked the poses of the figures in the eponymous Manet painting, which was itself inspired by Giorgione's Pastoral Concert. Quite logically, since it is based on a reproduction technique, this picture gave rise to a series of different works based on recropping and enlarging the original photograph. From one canvas to another, the size and colours of the dots vary, depending on the effects of blurring and scrambling, sometimes going so far as to make the subject disappear, as is the case in Limite entre le béton et l'eau (1964), in which we see a blow-up of the edge of the swimming pool around which the figures are gathered. As in most of Jacquet's works, there is a tension at work here between abstraction and figuration, but no rupture between them: quite the opposite, there are only transitions linked to questions of grading and focus. An image of an image of an image, Le Déjeuner revokes the notions of the originality and uniqueness of the artwork, thereby anticipating simulationist and appropriationist art at the same time as it signals a new condition of life: in a world that is increasingly saturated with signs and images, every experience is from the outset interwoven with representations.

Having set in motion his mechanical process, Jacquet used it on all kinds of support, applying different circular or linear grids, working from popular iconography, from photographs replaying iconic paint ings and major themes from the history of painting, such as women seen from behind, reclining or bending over. Amidst all this experimentation, the artist sometimes duplicates the grid effect by taking a subject that also has stripes (Zèbre, 1966) or when the object on which it is printed is one with it (an image of a jute bag on a jute sack, a floor on a floor, etc.), thereby revealing the fate that awaits the images of objects in the society of the spectacle. In the early 1970s The First Breakfast (1972–1978) initiated a series in which the artist's hand reappears and in which the latent images relating to popular culture give way to the projection of fantasy images. This seminal work consists of a reproduction of the first photograph of Earth seen from space, over which Jacquet superimposes a circular grid whose centre is the Pyramid of Cheops. In the paintings that follow the cloudy, continental masses of the globe yield mental figures of the kind perceived in Rorschach tests. They seem to conjure up visual patterns that belong to a collective unconscious, as suggested by the association linking of Earth to an egg or to forms akin to sexual organs (Mae West, 1985), if not the Jungian heritage claimed by Jacquet.5

The artist next moved from mechanical grids to digital ones. Computer graphics enabled him to flatten and unpack Earth and other planets, to unfold their surfaces like skins and then to generate perforated volumes called Donuts, or elongated ones, the Sausages, which he assembled into compositions that sometimes suggest a kind of cosmic coitus or refer to canonical artworks (La Joie de vivre by Matisse for La Danse, 1995). Quite aside from their humour, these canvases also carry a kind of basic symbolism that opens onto an infinite germination of signs, symbols and images.

Jacquet's contemporaneity is evident in the way his work resonates with that of a new generation of artists who do not view images as replications of the world but as the medium in which all individuals are immersed. The challenge here is to create singular paths through mass representations, to bring forth an aura, an effect of presence through precisely that which is said to mark its termination, namely, the copies of copies in a world cluttered with signs. Jacquet is no fatalist. On the contrary, he shows an unshakeable confidence in the possibility of producing difference within sameness.

1 This expression was used by Pierre Restany in an article published by Galeries Magazine in 1993.

3 As is shown by Guy Scarpetta in his book Alain Jacquet. Camouflages 1961–1964, Paris: Éditions Cercle d'Art, 2002, Alain Jacquet was not an epigone of Pop Art, but one of its major protagonists.

Sign up to be among the first to know when new exhibitions by Alain Jacquet or at Perrotin open.
Sign Up