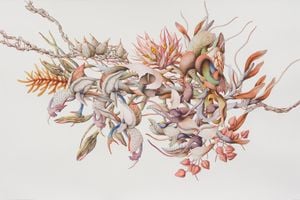 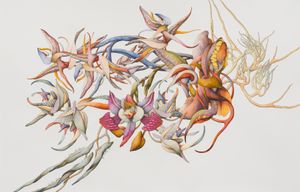 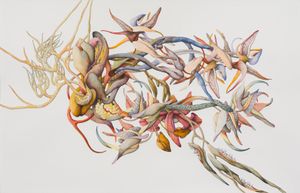 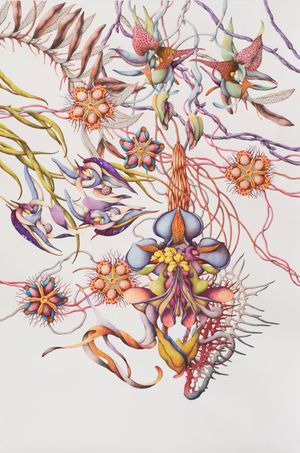 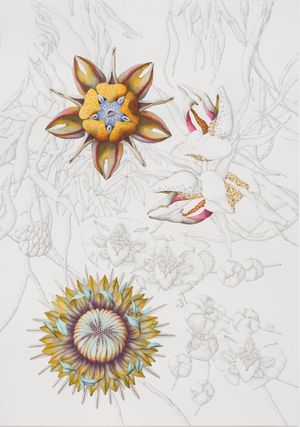 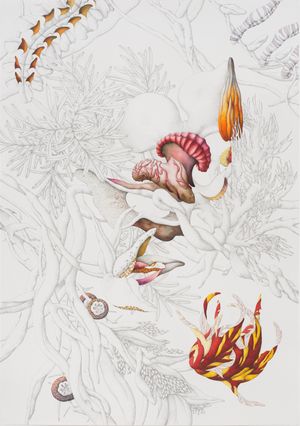 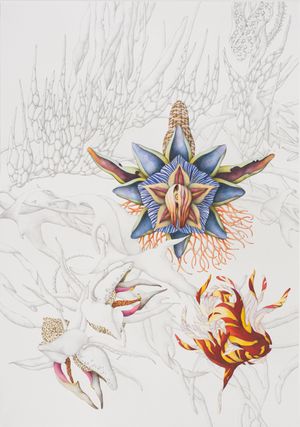 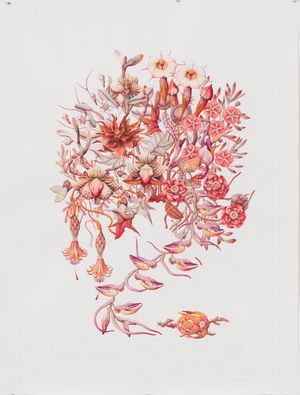 'The sight of a flower provokes in the mind much more significant reactions, because the flower expresses an obscure vegetal resolution' are the words Georges Bataille selected to indicate the evoking power of the blossoming figures in his essay 'The Language of Flowers' (1929).

Miron Schmückle's delicate paintings and their Latin titles, trick the viewers and their preconceived ideas, pretending to be something they are not. Hidden behind apparent botanical illustrations, the beauty of nature presents itself in the paintings in its most pure state, only to let the observer discover, that the plant-like elements depicted are fruit of the artist's imagination. Schmückle exaggerates the beauty of nature, creating artificial life with flowers that don't belong to Earth. The colours merge delicately within the shapes that enclose them. Applied on the surface, the Indian ink reproduces the vivid shades found in jungles and forests. Making use of existing elements, Schmückle's work arouses the viewers referents. Human assumption is the main component of the game: it is logical to conclude that the pleasing aesthetics of the flowers must determine that they are real. Nature is beautiful. The question, however, lays on the table. In a society distanced from nature, can the members of that society recognise what belongs to nature and what doesn't? Is the mind an instrument to nature's manifestation?

Long-lasting dedication, and biology studies, allow Miron Schmückle to achieve a hyper-realistic naturalism that deceives the eye. Is it really fantasy? The resemblance is obvious. The flowers, conscientiously detailed with its corollas, pistils, stamens and leaves, emanate truth about its own creation. For a flower to be a flower, it must possess all of the designated components. The logic in the depiction of a plant is however broken, as the organs that shove the living being to the ground are missing. Schmückle's plants aren't rooted but instead float on the whiteness, the void. The lack of soil allows the marvellous glory of the flowers to maintain their beauty despite time, eluding the permanently ephemeral state linked to their nature.

The provocation of reactions continues past the vegetal state of the flower, when the association of the imaginary and the form come together. Miron Schmückle subtly addresses form analogies between human anatomy and flora. Sexuality and flowers were vigorously discussed in the 18th-century, when Linnaeus discovered the sexual organs of plants.

Sight is probably the most developed and exercised sense in society nowadays. So much, that society barely conceives how the systems would work without it. With the uprise of technology, the consumption of visual content has multiplied abruptly. The semiotic, in regards of thought, has developed in time by making use of images. In Medieval Europe for example, the stories of the bible were taught through painting in churches. It is no surprise that current brain connections link forms and figures with meanings at a vertiginous speed.

The astonishing beauty, that hints to ideal proportions in nature, misleads the viewer to believe the authenticity of Schmückle's creations. In that sense, the artist is like a demiurg who reveals beauty extempore.

Sign up to be among the first to know when new exhibitions by Miron Schmückle or at SETAREH open.
Sign Up